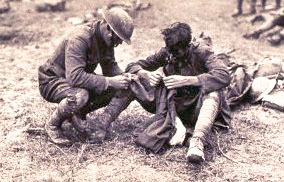 Soldiers in World War I search for lice. (Image from the Library of Medicine/History of Medicine collection.)

LBRF is caused by a spiral-shaped bacteria, Borrelia recurrentis, which is transmitted from human to human by the body louse. LBRF outbreaks most commonly occur in conditions of overcrowding and social disruption.

LBRF epidemics occurred frequently in Europe during the early 20th Century. Between 1919 and 1923, 13 million cases resulting in 5 million deaths occurred in the social upheaval that overtook Russia and eastern Europe. During World War II, a million cases occurred in North Africa.

Today, LBRF causes sporadic illness and outbreaks in sub-Saharan Africa, particularly in regions affected by war and in refugee camps. LBRF is commonly found in Ethiopia, Sudan, Eritrea, and Somalia. Illness can be severe, with mortality of 30 to 70% in outbreaks.