The trematodes Fasciola hepatica (also known as the common liver fluke or the sheep liver fluke) and Fasciola gigantica are large liver flukes (F. hepatica: up to 30 mm by 15 mm; F. gigantica: up to 75 mm by 15 mm), which are primarily found in domestic and wild ruminants (their main definitive hosts) but also are causal agents of fascioliasis in humans.

Although F. hepatica and F. gigantica are distinct species, “intermediate forms” that are thought to represent hybrids of the two species have been found in parts of Asia and Africa where both species are endemic. These forms usually have intermediate morphologic characteristics (e.g. overall size, proportions), possess genetic elements from both species, exhibit unusual ploidy levels (often triploid), and do not produce sperm. Further research into the nature and origin of these forms is ongoing. 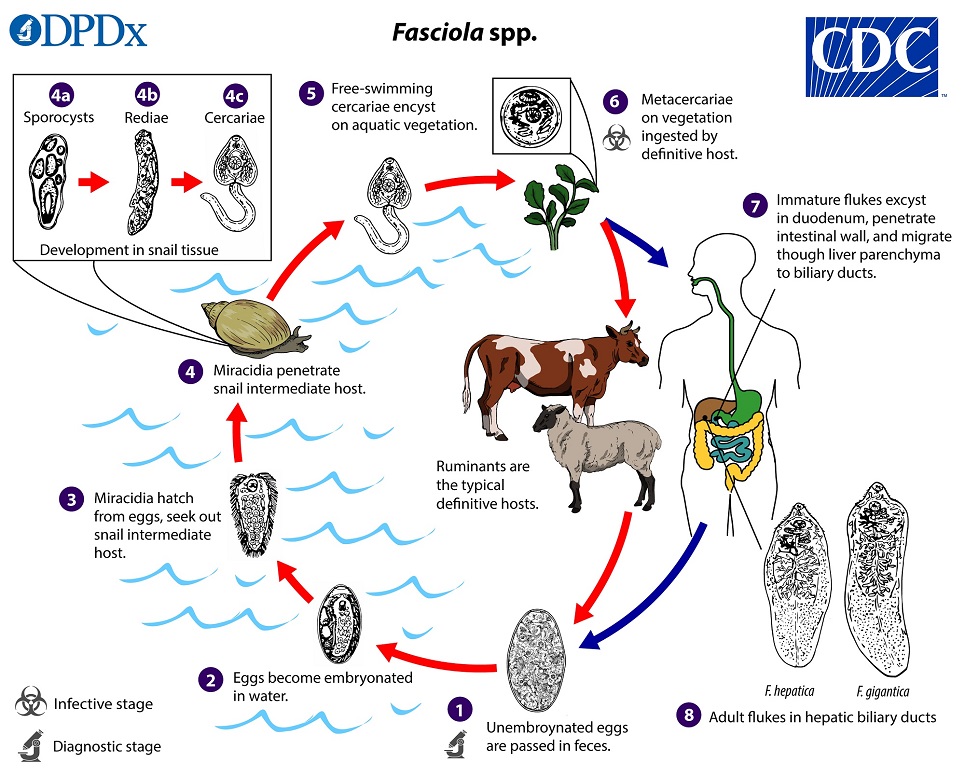 . In the snail, the parasites undergo several developmental stages (sporocysts

). The cercariae are released from the snail

and encyst as metacercariae on aquatic vegetation or other substrates. Humans and other mammals become infected by ingesting metacercariae-contaminated vegetation (e.g., watercress)

. After ingestion, the metacercariae excyst in the duodenum

and penetrate through the intestinal wall into the peritoneal cavity. The immature flukes then migrate through the liver parenchyma into biliary ducts, where they mature into adult flukes and produce eggs

. In humans, maturation from metacercariae into adult flukes usually takes about 3–4 months; development of F. gigantica may take somewhat longer than F. hepatica.