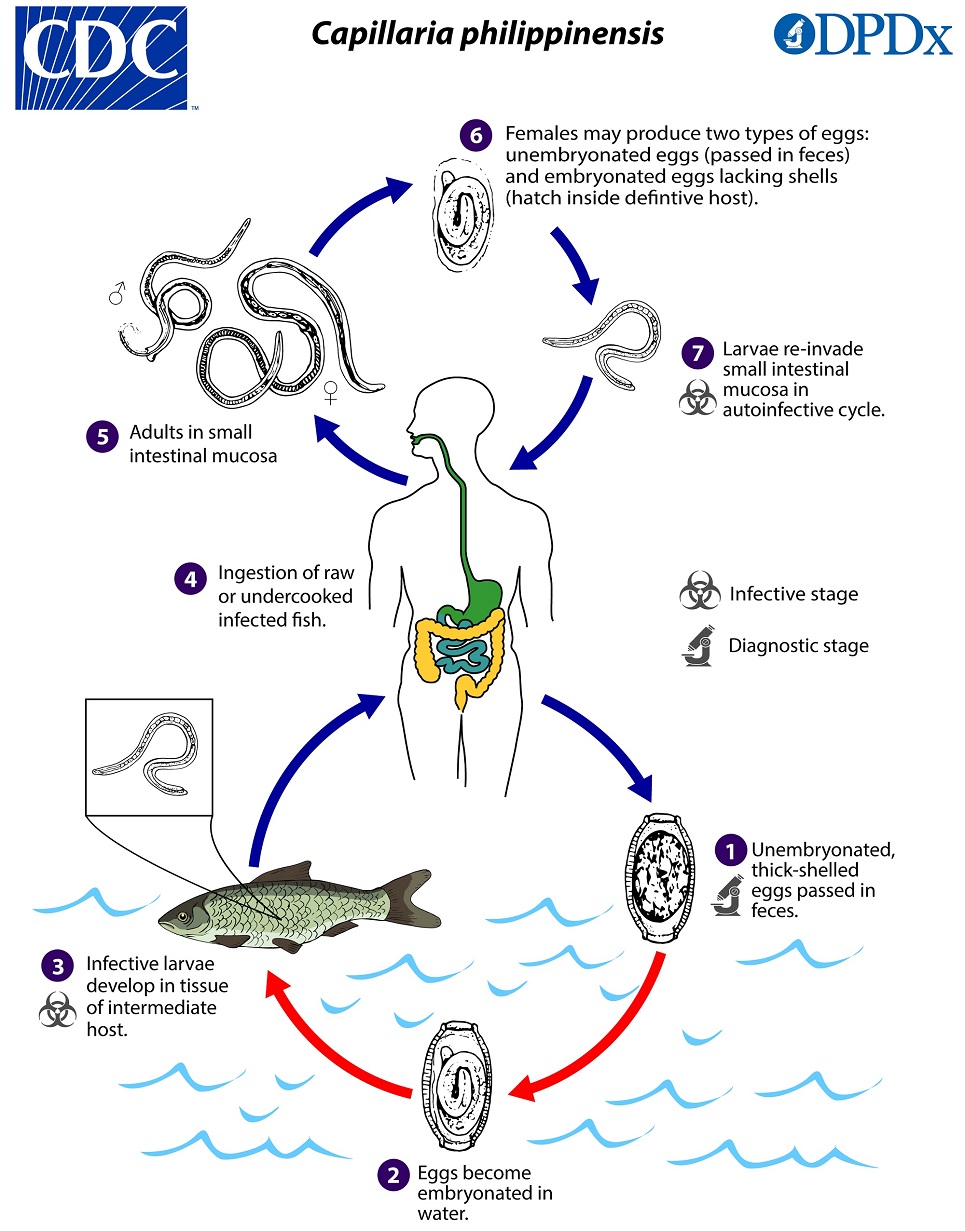 Typically, unembryonated, thick-shelled eggs are passed in the human stool

and become embryonated in the external environment in 5—10 days

; after ingestion by freshwater fish, larvae hatch, penetrate the intestine, and migrate to the tissues

. Ingestion of raw or undercooked fish results in infection of the human host.

The adults of Capillaria philippinensis are very small (males: 2.3 to 3.2mm; females: 2.5 to 4.3 mm) and reside in the human small intestine, where they burrow in the mucosa

. In addition to the unembryonated, shelled eggs which pass into the environment, the females can also produce eggs lacking shells (possessing only a vitelline membrane)

, which become embryonated within the female’s uterus or in the intestine. The released larvae can re-invade the intestinal mucosa and cause internal autoinfection

. This process may lead to hyperinfection (a massive number of adult worms).

While piscivorous birds have been suggested as a wildlife reservoir of C. philippinensis, this has not been well substantiated based on field observations. Experimental trials have established heavy patent infections in several bird species (particularly herons, egrets, and bitterns), but extensive surveys of wild birds in endemic areas have largely failed to detect infection. Many species of freshwater fish appear susceptible to infection and act as intermediate hosts.

As the name suggests, Capillaria philippinensis is endemic in the Philippines and epidemics have occurred in the Northern Luzon region. The parasite is also endemic in Thailand, and sporadic cases have been reported from other East and Southeast Asian countries. More recently, a number of cases have been identified in northern Egypt.

Intestinal capillariasis initially manifests as abdominal/gastrointestinal disease, which can become serious if not treated because of autoinfection. A protein-losing enteropathy can develop which may result in complications such as cardiomyopathy, severe emaciation, cachexia, and death. In the first recognized outbreak of intestinal capillariasis, the case fatality rate was over 10%.