Ascaris species are very large (adult females: 20 to 35 cm; adult males: 15 to 30 cm) nematodes (roundworms) that parasitize the human intestine. A. lumbricoides is the primary species involved in human infections globally, but Ascaris derived from pigs (often referred to as A. suum) may also infect humans. These two parasites are very closely related, and hybrids have been identified; thus, their status as distinct, reproductively isolated species is a contentious topic. 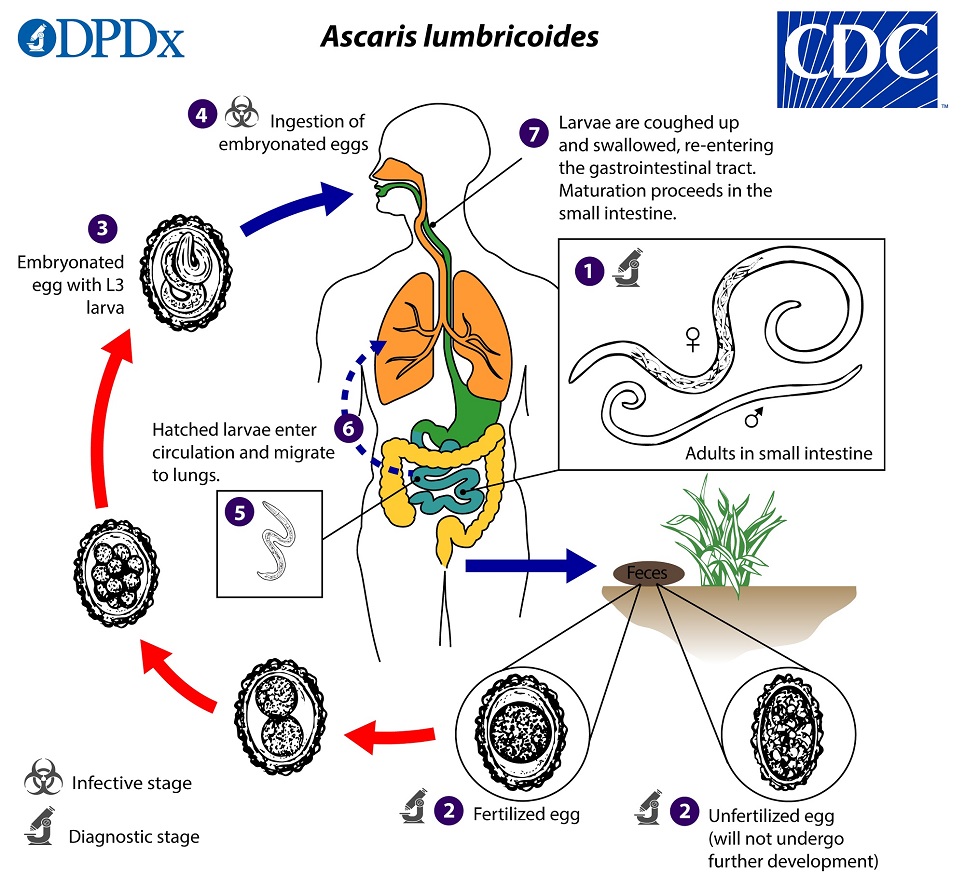 live in the lumen of the small intestine. A female may produce approximately 200,000 eggs per day, which are passed with the feces

. Unfertilized eggs may be ingested but are not infective. Larvae develop to infectivity within fertile eggs after 18 days to several weeks

, depending on the environmental conditions (optimum: moist, warm, shaded soil). After infective eggs are swallowed

, invade the intestinal mucosa, and are carried via the portal, then systemic circulation to the lungs

. The larvae mature further in the lungs (10 to 14 days), penetrate the alveolar walls, ascend the bronchial tree to the throat, and are swallowed

. Upon reaching the small intestine, they develop into adult worms. Between 2 and 3 months are required from ingestion of the infective eggs to oviposition by the adult female. Adult worms can live 1 to 2 years.

Humans and swine are the major hosts for Ascaris; see Causal Agents for discussion on species status of Ascaris from both hosts. Natural infections with A. lumbricoides sometimes occur in monkeys and apes.

Occasionally, Ascaris sp. eggs may be found in dog feces. This does not indicate true infection but instead spurious passage of eggs following coprophagy.

Ascariasis is the most common human helminthic infection globally. The burden is highest in tropical and subtropical regions, especially in areas with inadequate sanitation. This infection is generally rare to absent in developed countries, but sporadic cases may occur in rural, impoverished regions of those countries. Some cases in these areas where human transmission is negligible have direct epidemiologic associations to pig farms.

Although heavy infections in children may cause stunted growth via malnutrition, adult worms usually cause no acute symptoms. High worm burdens may cause abdominal pain and intestinal obstruction and potentially perforation in very high intensity infections. Migrating adult worms may cause symptomatic occlusion of the biliary tract, appendicitis, or nasopharyngeal expulsion, particularly in infections involving a single female worm.