The Story of the Rift Valley Fever Virus Vaccine 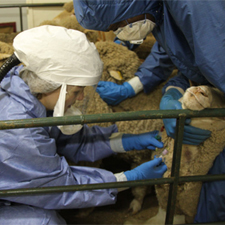 In late 1997, a disease outbreak began in East Africa. In three months, 90,000 people became sick and almost 500 people died. Many animals in the region also died, causing economic difficulties for the people who relied on these animals for milk, meat, and as a trading commodity. The loss of human lives and animals was devastating for the communities. The cause of this outbreak was the Rift Valley fever virus.

Rift Valley fever (RVF) is caused by a virus that is transmitted by mosquitoes. Since it was discovered in 1930, RVF virus has caused multiple outbreaks in Africa and the Middle East. The virus can cause severe disease in both animals and humans. People can be infected from the bite of a mosquito or through direct contact with the blood and tissues of infected animals.

Most people infected with the RVF virus do not have any signs of disease, but some people will become very sick. They can develop blindness, encephalitis (brain swelling), and hemorrhagic fever (unusual bleeding), and some die from the disease. RVF can also cause disease in many species of livestock, such as sheep, goats, cattle, and camels. Many infected animals, especially young animals, die from the disease. Almost all pregnant animals will miscarry if they are infected with the virus.

RVF outbreaks often occur in years of unusually heavy rainfall. These rains cause flooding, which provides a perfect environment for the infected mosquito eggs in the soil to hatch. If health officials knew that heavy rains were coming, they would have time to prevent RVF illnesses in animals and humans.

Researchers have discovered that these heavy rains are caused by changes in ocean temperature which affect weather patterns around the world. Scientists with the National Aeronautics and Space Administration (NASA) can use satellite images to monitor changes in ocean temperature. Health officials can then use this information to predict when outbreaks of RVF are likely to occur and take action to prevent them.

RVF is difficult to control because infected mosquito eggs can survive for years in the soil. Infected animals develop high levels of virus in their blood, making it easy for mosquitoes that bite these animals to then become infected with the virus. This chain of transmission must be broken to prevent disease in people and animals.

How do we break the chain of transmission? Vaccinating people is not an option because there is no RVF vaccine. Killing mosquitoes with pesticides is not a good option because it is time-consuming and exposes people to other health risks.

What does work, however, is to vaccinate animals against RVF. By preventing RVF in animals, fewer humans will be infected from mosquitoes carrying the virus or from direct contact with a sick animal. Vaccinations also protect the animals that the people rely on for food and as a source of income.

CDC researchers have developed a vaccine. During early testing, all vaccinated animals were protected against the RVF virus. There were no negative side effects. The vaccine is also inexpensive to produce, and this makes it an affordable option for developing countries.

One Health in Action

When professionals from different disciplines work together to protect the health of people and animals, this is One Health in action. For example:

By collaborating effectively with individuals from many fields, public health professionals can prevent outbreaks of RVF and better protect the health of people.