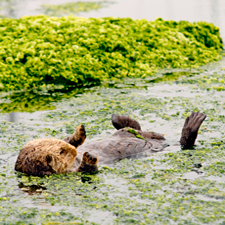 California scientists and veterinarians found themselves in the middle of a mystery in 2007. Over the span of a year, 11 dead or dying sea otters had been found around Monterey Bay, California. The sea otters’ gums had turned yellow and they had swollen livers, but when scientists and veterinarians tested for common diseases that can affect the liver, they didn’t find anything. They started exploring other possibilities and finally found a clue—a positive lab test revealed that the sea otters had died of something called microcystin. Microcystin is a toxin given off by a type of phytoplankton called cyanobacteria, also commonly known as “blue-green algae.”

But the mystery continued, because blue-green algae like to live in freshwater, not marine water where the sea otters live. How had the sea otters been poisoned? A One Health investigation team with scientists from the California Department of Fish and Wildlife (CDFW), U.S. Geological Survey (USGS), the California Department of Public Health (CDPH), the State Water Resources Control Board, and local universities and organizations came together to crack the case.

The team sampled water from freshwater and marine water sources along the central California coast to try to find the source of the toxin. Ultimately, the team found that the answer was in Pinto Lake – a freshwater lake that drained into a creek that flowed into the Pajaro River, which in turn flowed into the sea at Monterey Bay. The lake had recently been affected by a large harmful algal bloom (HAB)–a rapid growth of algae that can cause harm to animals, people, and the local ecology. The hypothesis was that otters had eaten shellfish that had concentrated the toxin. After months of hard work, the team had their answer.

Although blue-green algae are most commonly found in freshwater, the situation in Monterey Bay showed that their effects could reach a larger area than previously thought. The sea otter’s deaths, as well as several studies that indicate how our changing environment might increase HAB frequency and severity, demonstrate the need to collect more information on HABs and the illnesses that they may cause in people and animals throughout the United States. New data about HABs will help CDC and our partners better understand and prevent future poisonings.

CDC launched the One Health Harmful Algal Bloom System (OHHABS) in 2016, after more than 2 years of working closely with state and federal partners to design and test it. OHHABS is a voluntary reporting system that allows state and territorial public health agencies and their designated environmental health or animal health partners to report HABs—and illnesses caused by exposures to HABs—nationally. By using a One Health approach, OHHABS aims to share information between human and animal health agencies to improve our understanding of these environmental blooms to best protect health for all.

The Monterey Bay investigation used a One Health approach by bringing scientists from many different fields together to help solve the mystery of the sea otter die-off. HABs can have serious effects on the health of humans, animals, and our shared environment. Understanding and preventing HABs will require continued cooperation across different fields using an interdisciplinary One Health team approach. Fortunately, experts around the United States are hard at work employing a One Health approach to study these blooms and prevent their harmful effects in the future.