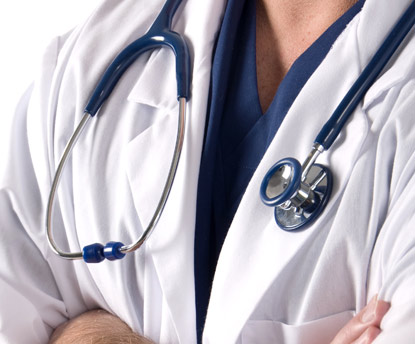 Epidemiologists at the Kansas Department of Health and Environment (KDHE) received a request from their counterparts in Wisconsin asking that they conduct syndromic surveillance to look for potential cases of lung injury. After identifying the first case in Kansas, KDHE issued a statewide health alert to clinicians summarizing the multistate outbreak. Case reports started to come in, but KDHE epidemiologists questioned whether some cases were being missed. They began comparing clinician-reported cases with syndromic surveillance results and refined syndromic queries to target the EVALI-risk population.

The use of syndromic data to identify potential cases and subsequent comparison with clinician-reported cases helped in two ways. First, by identifying potential cases, the emerging picture of EVALI was more accurate. Second, by asking facility clinicians and infection prevention staff for case records and explaining why the records were needed, Kansas raised facility awareness of the condition and improved case reporting for EVALI. Funding from the National Syndromic Surveillance Program supports the use of syndromic surveillance in improving the nation’s public health.

The U.S. outbreak of e-cigarette, or vaping, product use-associated lung injury (EVALI) has received major media attention ever since the Centers for Disease Control and Prevention (CDC) deployed a team of epidemiologists to investigate a cluster of teenagers and young adults in Wisconsin and Illinois presenting with unexplained, sudden onset lung injuries in August 2019. Given the popularity of e-cigarette, or vaping, product use among youth, combined with the severity of this lung injury, public health officials pushed to identify and prevent additional cases quickly. As the regional investigation unfolded, other states searched for potential cases in their emergency department data. With the need for timely data to understand what was happening in states, ESSENCE1 and syndromic inquiries took center stage.

On August 1, 2019, epidemiologists at the Kansas Department of Health and Environment (KDHE) received a request from their counterparts in Wisconsin asking that they query ESSENCE for potential cases of lung injury. After the first case in Kansas was identified on August 30, 2019, KDHE issued a statewide health alert to clinicians summarizing the multistate outbreak. This alert used initial syndromic surveillance numbers for respiratory syndrome with mention of e-cigarette, or vaping, product use to highlight the possibility of the outbreak reaching Kansas. After issuing a health alert, reports of cases started to come in, but KDHE epidemiologists questioned whether some cases were being missed.

After the second EVALI-reported death in Kansas, KHDE Secretary Dr. Lee Norman testified to Congress about what he recognized as “a public health emergency of considerable importance.” As heightened surveillance became more critical, there was an increased need to identify cases, investigate potential cases, and encourage clinician reporting. 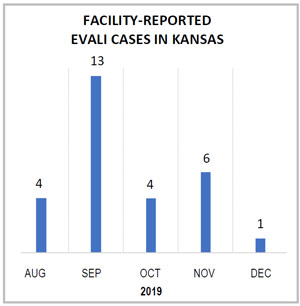 Shown here are EVALI cases reported to the Kansas Epidemiological Hotline via the electronic disease surveillance system, EpiTrax. Kansas epidemiologists noticed a sharp increase in provider reporting after the initial health alert was issued in August. Reported cases declined in October before increasing slightly in November after efforts were made to actively identify unreported cases.

During the last week of September 2019, the Kansas Syndromic Surveillance Program2 began using syndromic data to identify potential cases of EVALI. KDHE epidemiologists compared clinician-reported cases with ESSENCE query results, revealing that both queries—one based on vaping-related terms and one on severe lung injury—were insufficient for case finding. Consequently, they refined these syndromic queries to improve performance, balancing sensitivity with specificity. Sometimes, though, diagnoses were masked in emergency department visits by problems associated with co-occurring drug or alcohol use. Initially, KDHE epidemiologists excluded terms for drug use to decrease noise. But with the limited size of the Kansas population, epidemiologists later opted to include the terms, thereby increasing query sensitivity. They also refined the queries to exclude very young children and the elderly, making the queries more specific to the EVALI-risk population, limiting the follow-up workload, and improving timeliness.

In October 2019, nine records were identified using the method described above. After further review of the patients’ full medical records, three patients met the EVALI case definition, which prompted a full investigation. The use of syndromic surveillance to identify potential cases and subsequent comparison with records from the caregiving facility helped in two ways. First, by identifying potential cases, the emerging picture of EVALI was more accurate. Second, by asking facility clinicians and infection prevention staff for case records and explaining why the records were needed, KDHE helped raise facility awareness of the condition and improve provider reporting.

Periodic syndromic surveillance within the public health investigation provided important information to clinicians at the forefront of EVALI response efforts. Further investigation of any increase or decrease in provider reporting can ensure continued situational awareness during an extended outbreak. Kansas epidemiologists for the tobacco-use prevention program will continue using the established query to monitor for additional cases of EVALI. Should the need arise, Kansas is now prepared to conduct timely surveillance and active case finding for future public health problems using similar strategies.