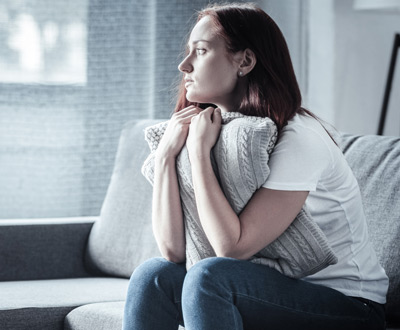 In Idaho, suicide is a top cause of death among teens and young adults, second only to accidental deaths. One Northern Idaho health district identified suicide as a top public health priority. While data on deaths from suicide were available, public health officials wanted to gain a better understanding of suicide attempts and suicidal thoughts to inform potential interventions.

Data from emergency department (ED) visits where people report on suicidal thoughts and suicide attempts are captured as part of syndromic surveillance. Local health officials analyzed these data over the course of a year to look at the demographics of those who went to the ED as a result of a suicide attempt or presented with thoughts of suicide. Demographics such as gender or age can provide a clearer picture of who is at risk. Understanding who is at risk can help with development of more targeted interventions.

Local health officials provided their findings to the Suicide Prevention Action Network in the district to use in planning. Funding from the National Syndromic Surveillance Program supports the use of syndromic surveillance in improving the nation’s public health.

In 2015, Idaho was among the top 10 states for suicides in the United States. Suicide as the cause of death for teens and young adults in Idaho was exceeded only by accidental deaths. On average, one suicide death occurred among all ages every day.1 Among the seven Idaho local public health districts, Panhandle Health District (PHD1) in northern Idaho had the highest suicide rate, at 28 deaths per 100,000 population. In 2014, the PHD1 Community Health Assessment identified suicide as a top public health priority.2

Information from coroners and vital statistics provides data on completed suicides—but not on attempts or ideation. Emergency department (ED) data on visits involving suicidal ideation and suicide attempts were anticipated to provide a more robust picture of suicide in PHD1 by allowing the PHD1 syndromic surveillance epidemiologist to examine demographics of attempted suicides and suicide ideation.

Data were examined for temporal trends and sex and age distribution. To prevent inadvertent disclosure of personal health information, results were aggregated with respect to geographic locations of facilities and patients, and ages grouped into categories (0–4 years, 5–17 years, 18–44 years, 45–64 years, and 65 or more years). These categories were derived from the ESSENCE software’s internal capability.

* Electronic Surveillance System for the Early Notification of Community-based Epidemics 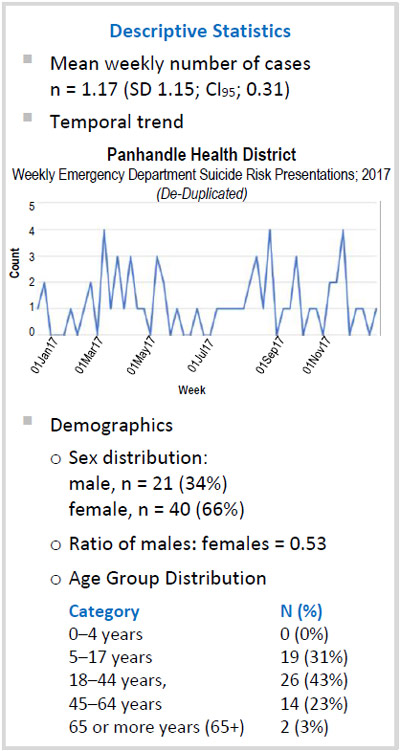 Sixty-one visits were identified by the query and line-by-line review of visit data. Zero to four (mean = 1.17) cases per week were detected. Most suicide-related ED visits clustered among the 18–44 year age group (43%), followed by the 5–17 year age group (31%). In this first year of surveillance, suicide-related ED visits were 1.9 times more frequent among females than males. It is unclear now what the significance of this ratio is, or if it will persist over time. An initial set of hypotheses includes whether females are more likely to be at risk or to seek help, or males are more likely to complete suicide. An identifiable temporal pattern of suicide attempt or ideation was not observed from January 1, 2017, through December 31, 2017. Additional years of data are needed to determine if lack of a temporal pattern is unusual or expected.

PHD1 provided a report to the Suicide Prevention Action Network in the Panhandle Health District for use in their planning process. Weekly monitoring and analysis of data will continue, and analysis will be expanded to include methods of suicide attempts (if identified) with a look at possible correlation of methods to sex and age.