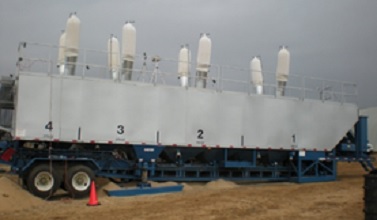 Researchers at the National Institute for Occupational Safety and Health (NIOSH) have developed and tested a prototype called the “mini-baghouse” that can protect oil and gas extraction workers by effectively controlling silica dust at hydraulic fracturing worksites. Research on the mini-baghouse will be presented November 4, 2015 at the American Public Health Association’s annual meeting in Chicago.

Silica is a human carcinogen, and exposure to silica is known to cause silicosis, a disabling, non-reversible, and sometimes fatal lung disease. Exposure to respirable crystalline silica at oil and gas extraction sites is a documented risk to workers. In a 2013 studyexternal icon, NIOSH researchers found that some workers who work around sand moving machinery were exposed to silica at levels that exceeded all relevant occupational health criteria.

The NIOSH mini-baghouse retrofit assembly was designed to control dust emissions from thief hatches on top of sand movers—a major source of silica dust. Working with private industry, NIOSH researchers field-tested the prototype, collecting nearly 200 air samples in 12 locations on and around a sand mover, both with and without the mini-baghouse. Results from the evaluation found that the mini-baghouse reduced the amount of airborne respirable crystalline silica by 79-99%.

Researchers also analyzed the dust collected by the mini-baghouse and determined that the particles captured were extremely fine (1-2 microns in diameter). This type of dust is highly respirable and can penetrate deep into the lungs. Researchers also determined the dust was freshly fractured quartz, which is a particularly hazardous form of respirable crystalline silica.

In early 2015, NIOSH researchers tested a new and improved 3rd generation mini-baghouse that features design enhancements including improved baghouse material and a dust-release coating. NIOSH is now seeking additional industry partners to help advance this novel, potentially life-saving technology and help bring it to market through a commercial licensing agreement.

NIOSH is the federal agency that conducts research and makes recommendations for preventing work-related injuries, illnesses, and deaths. For more information about NIOSH visit www.cdc.gov/niosh/.