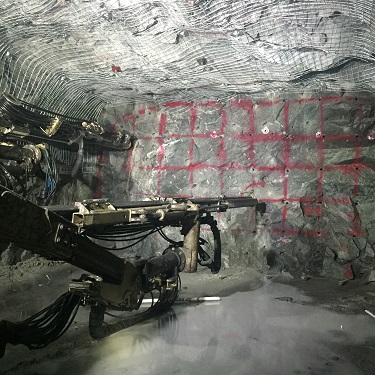 Drilling of a drift, with red paint showing a
typical spacing grid without perimeter control.

Mines can now reduce the risk of post-blast ground falls with the DRIFT software, which helps engineers to create more effective blast designs. DRIFT was developed by the National Institute for Occupational Safety and Health (NIOSH) Mining Program to help reduce the risk of ground falls, which remain a serious threat to the safety of miners.

Particularly in underground metal/nonmetal mines, controlled blasting is used to create entries, commonly referred to as drifts. Poor blast design can lead to loose or damaged rocks in the roof and at the ribs of drifts when the force of a blast extends beyond the target area. Scaling, excessive overbreak, and damage to supported ground all pose a risk of disabling injuries and fatalities to miners after blasting is completed.

“DRIFT is an invaluable tool for mines that want both more control over their blasting designs and a reduced risk of ground falls for workers,” said NIOSH Associate Director for Mining, Dr. Jessica Kogel. 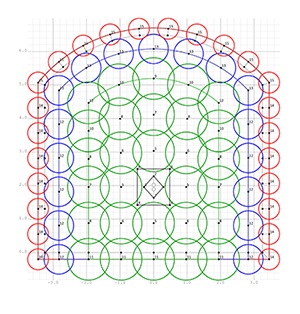 DRIFT enables engineers to create a conceptual blast design by coordinating perimeter and buffer rows for blasting. The software provides nine blast damage models to use and evaluate when developing designs. Application of these models produces damage calculations for each blasthole in a graphical format. The calculated damage can then be used to determine the spacing necessary for each row. Blast designs can be saved, revised, and printed along with the graphs and calculations. A manual design option—which allows users to input all variables—is also available.

When using DRIFT, NIOSH recommends field trials and refinements until design objectives are met for each entry before blasting is undertaken.

NIOSH is the federal institute that conducts research and makes recommendations for preventing work-related injuries, illnesses, and deaths. For more information about NIOSH, visit www.cdc.gov/niosh/.