NIOSH Researcher a Finalist for “Oscars” of Government Service 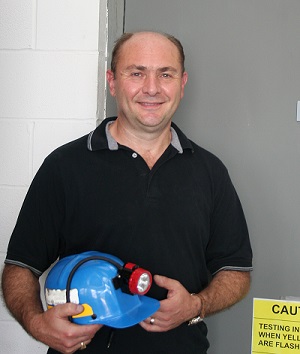 Washington, D.C. – National Institute for Occupational Safety and Health (NIOSH) researcher John Sammarco, Ph.D., is announced a finalist for a Service to America Medal, or Sammie, in honor of his decades of public service to improve the health and safety of mine workers. He has a 30-year government research career and is nominated in the Career Achievement category.

On May 8, all finalists were honored in Washington, D.C. as part of Public Service Recognition Week.

Sammarco is a principal research engineer at the NIOSH Mining Program, a research program within CDC dedicated to improving the health and safety of mine workers. An electrical engineer by training, Sammarco has focused his work on improving lighting conditions in underground mines, something that is consistently a challenge for subterranean workspaces and the workers who operate in them.

“Proper lighting is about more than just seeing things better,” Sammarco says. “It’s about the health effects that come with lighting, reducing fatigue, helping workers on shift work. One thing snowballs into another and I’m excited to tackle bigger and bigger problems.”

Poor lighting can lead to slip, trip and fall injuries because workers cannot see the hazards around them. It can also be a factor in injuries or fatalities caused by workers struck or pinned by moving equipment they don’t see or by machines operated by coworkers who can’t see fellow miners around them. According to data from 2008-2012, slips, trips and falls are the second leading accident class of nonfatal injuries at underground mines. During that same time period, 27 people died from being struck, pinned or otherwise entangled in equipment.

As part of a recent research project, Sammarco developed a much-improved light-emitting diode (LED) helmet cap lamp design that offers a more intense spot beam and overall broader light coverage than previous LED designs. Sammarco also used LEDs to develop a specific, machine-mounted area light that cuts glare, improves visibility and provides workers the light needed to see hazards, and he offered up those schematics freely to the equipment manufacturing industry and the public at large. Another area light will soon roll out for mining industry use, and Sammarco anticipates seeing more companies use his formative science to craft their own models.

In addition to the honor of this nomination, Sammarco has been awarded eight prestigious awards since 2011, including the 2016 Federal Engineer of the Year Agency Award from the National Society for Professional Engineers and the 2017 NIOSH Bullard-Sherwood Award for Research to Practice. Last year, Sammarco was named an ABET Fellow, an honor bestowed on select members of the worldwide, nonprofit, non-governmental professional organization who have shown extraordinary dedication to the accrediting body.

“John Sammarco is one of those government employees you dream of having on your team,” says Dana Willmer, Ph.D., his branch chief who nominated him for the honor. “He has such powerful vision to see where technology can step in—now or in a few years’ time—and make an enormous impact on worker health and safety. He’s generous with his time and talents, and mentors the rising generation of researchers. I can’t think of a more deserving individual.”

The Sammies are awarded annually by the Partnership for Public Service—a nonprofit organization dedicated to promoting and strengthening civil service—after a vigorous process that selects one winner in each of eight categories: Management Excellence, Science and Environment, National Security and International Affairs, Promising Innovations, Homeland Security and Law Enforcement, Career Achievement, People’s Choice Award and the Federal Employee of the Year.

Medal recipients will be announced October 2 during a gala at the Andrew W. Mellon Auditorium in Washington, D.C.

NIOSH is the federal institute that conducts research and makes recommendations for preventing work-related injuries, illnesses and deaths. For more information about NIOSH, its mission, and mining safety visit http://www.cdc.gov/niosh/.