Fifth Annual Stand-Down for Fall Safety: Building momentum for the next five years 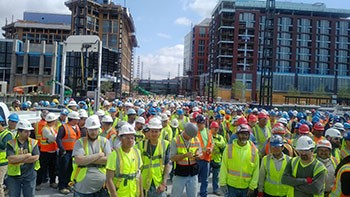 Workers across the nation are participating in the fifth National Safety Stand-Down to Prevent Falls in Construction, during the week of May 7-11. With falls on construction sites the leading cause of death in the industry, employers are encouraged to stop all work at some point during this week and speak directly to their workers about fall hazards through talks, demonstrations and training to reinforce the importance of proper fall prevention.

The National Safety Stand-Down is a combined effort by the Occupational Safety and Health Administration (OSHA), the National Institute for Occupational Safety and Health (NIOSH), and CPWR—The Center for Construction Research and Training, all working in collaboration with other partners. The Stand-Down grew out of the National Campaign to Prevent Falls in Construction initiated in 2012, reminding the nation throughout the years that fatal falls are entirely preventable. Now in its fifth year, the Stand-Down invites all construction contractors, employers, site supervisors, foremans, health & safety professionals, workers, and intermediaries to pause for a moment and join an increasingly successful effort that helps promote safety on the job.

In 2016, falls accounted for 37% of the work-related deaths suffered by construction workers. Employers have an opportunity to change that.

“The Stand-Down has touched so many lives since its creation because all of us in construction know the hazards,” said Dean McKenzie, OSHA Director of Construction. “Many of us have experienced the consequences of falls or know someone who has.  So, we encourage everyone to take this opportunity and redouble efforts to make sure all workers go home to their families every night.”

Over the last five years, thousands of companies have participated in the Stand-Down, reaching millions of workers across all 50 states and internationally. Since the kick-off of the very first Stand-Down, over 7.5 million people have participated across the nation. Employers, both large and small business owners, were initially motivated by an invitation from OSHA, NIOSH and CPWR to participate. After participating in the Stand-Down for several years, their motivations have shifted to a deeper organizational commitment to safety and maintained their participation levels, changing the very culture of the workplace.

“As the National Safety Stand-Down to Prevent Falls in Construction approaches its fifth year, the commitment from partners, employers and workers to invest in fall prevention is something to celebrate, and adds real value for those who are at the highest risk for falls,” said NIOSH Director John Howard, M.D. “Stand-down operations have gained traction, and it is important to use this momentum to further promote a positive work culture and emphasize worker safety at all times.”

Additional work remains to be done and more participants are needed. By joining the campaign and taking part in the national effort to prevent falls in construction, employers and workers become part of something larger.

“We know from extensive interviews with participants that the Stand-Down is gaining traction because it works,” said CPWR Executive Director Chris Trahan Cain. “Companies who participate in the Stand-Down report not only an improvement in their fall prevention activities and programs, but also fewer falls on their jobsites, enhanced relationships with OSHA, NIOSH, and CPWR, and improved capacity for addressing safety issues other than falls.”

The Stand-Down offers a unique, voluntary opportunity for employers to speak openly to their workers about fall hazards. To guide the efforts, OSHA has developed the official National Safety Stand-Down web siteexternal icon for conducting successful stand-downs across all fifty states. Access to free training and education resources in English and Spanish, and a personalized certificate of participation, are available.

Preparation for next week’s Stand-Down is well underway. To conduct a successful Stand-Down, activities can include:

NIOSH is the federal institute that conducts research and makes recommendations for preventing work-related injuries, illnesses, and deaths. For more information about NIOSH, its mission, and construction safety visit http://www.cdc.gov/niosh/.