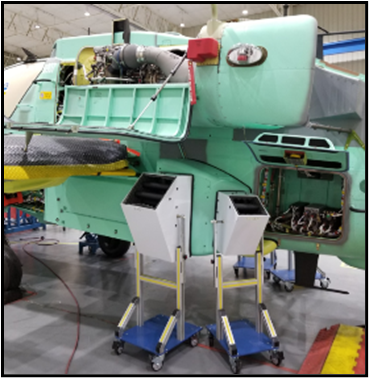 This year’s award for innovation in hearing loss prevention goes to Vertical Lift, AH-64 Apache Helicopter of the Boeing Company in Mesa, Arizona. The award will be presented live on February 26, 2021 at 3pm EST as part of the 45th annual NHCA conferenceexternal icon happening virtually for the first time this year.

The Boeing Mesa Site’s main purpose is the assembly, integration, and testing of rotorcraft. This includes the AH-64E Apache Helicopter, a combat-proven aircraft used by the US Army and other customers around the globe. The Apache’s environmental control system (ECS) is an air conditioning system used to keep electronics and the cabin cool, but four ducted fans or exhaust outlets on the sides of Apache run very fast to move air across the condenser. The fans are very loud, with high pitched noise levels that range from 84 to 104 dBA while work is being performed, according to Mesa Production workers. Noise over 85 dBA can impact workers in many ways and lead to permanent hearing loss. Hearing protection is required, but it makes communication between crew members difficult. 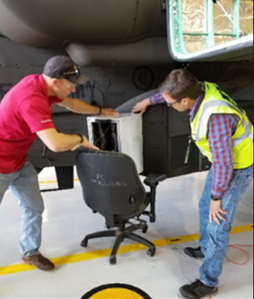 Production employees and in-house engineers at the Boeing Mesa site worked together to develop a noise suppression kit or “hush kit” to reduce noise levels generated when workers need to test the Apache helicopters. The kit consists of a baffled box with sound absorbing foam which is rolled and situated against the exhaust outlet. This cost-effective solution reduced noise levels by 50- 72% to 85 dB or less when workers are five feet from the source.

“Although the AH-64 Hush Kit does not relieve individuals from using hearing protection, it is simple in design and makes life a lot more enjoyable working around an energized AH-64, greatly reducing the noise and comfort levels on and around the aircraft. And it’s helped with my tinnitus that the AH-64 ECS had previously aggravated,” said Stuart A. Lange, an Apache production flight tester.

The Mesa site crew plans to build at least 10 additional “hush kits” and generate customer awareness of their innovation. They hope that winning the Safe-In-Sound award will help in communicating with other teams for future innovations and inspire employees to become engaged and take action on matters of workplace safety.

“As demonstrated by some of the previous Safe-in-Sound award recipients, this year’s winner showcases the success of an intervention that resulted from the active involvement of workers and in-house expertise,” said NIOSH senior research audiologist and director of the Safe-in-Sound award Thais Morata, PhD. “With appropriate tools, facilitation, resources and encouragement, workers identified the problem and helped develop a cost-effective noise control solution.”

NIOSH is the federal institute that conducts research and makes recommendations for preventing work-related injuries, illnesses, and deaths. For more information about NIOSH visit www.cdc.gov/niosh.