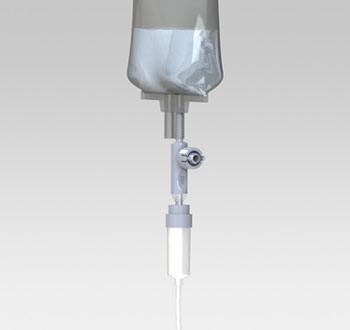 CSTD bag or infusion adapter attached to an IV bag.

NIOSH defines a Closed System Drug-Transfer Device (CSTD) as “a drug transfer device that mechanically prohibits the transfer of environmental contaminants into the system and the escape of the hazardous drug or vapor concentrations outside the system” [NIOSH 2004]. Currently, CSTDs generally follow one of two design concepts, using either a physical barrier or an air-cleaning technology to prevent the escape of hazardous drugs into the work environment. When appropriately designed and used, CSTDs offer enhanced protection against potentially hazardous exposures to healthcare workers during the compounding and administration of hazardous drugs.

NIOSH recommends healthcare workers use a CSTD throughout the hazardous drug-handling chain, from pharmaceutical compounding to patient dose administration [NIOSH 2004]. While all CSTDs may not be equally protective, research shows that CSTD use can reduce hazardous drug contamination [Vyas 2013]. CSTDs should not be the only means of worker protection. They should be used as part of a hazardous drug safety program and used in conjunction with other engineering controls [NIOSH 2004].

As CSTD designs and available models changed, NIOSH and its industry partners realized the need for an independent testing method for CSTD performance.

The following is information on NIOSH CSTD research activities and includes links to early draft protocols, other associated documents, and public comments. Also provided is an update on the research status of the most-recent NIOSH draft CSTD test protocol. This is a unified test protocol for both air-cleaning and barrier type CSTDs. Check back for more on this continuing NIOSH research project and other relevant CSTD information.

NIOSH scientists developed this protocol with input from registered pharmacists experienced with CSTD use. The pharmacists performed the protocol’s prescribed compounding and administration tasks for five commercially available CSTDs with 70% isopropyl alcohol (IPA) as the challenge agent. They also tested a negative control condition without a CSTD. The tests were conducted in an environmental test chamber, and a gas analyzer was used to detect vapor concentrations of escaped IPA during the tasks.

This protocol had several potential applications including that it could be used by:

The protocol was posted for public comment at www.regulations.govexternal icon (CDC-2015-0075) and NIOSH Docket Number 288. The original draft plus submitted public comments can be found at https://www.cdc.gov/niosh/docket/archive/docket288.html.

NIOSH’s Air-Cleaning CSTD Protocol
After receiving public comments following the original draft protocol, NIOSH sought stakeholder input to develop a performance test protocol for CSTDs that use air-cleaning technology. The original request for comments can be found in this document: Federal Register Notice 2016-00827.

NIOSH’s Unified CSTD Test Protocol
As the public submitted comments on the development of an air-cleaning type CSTD test protocol, NIOSH began investigating a unified CSTD test protocol which could be used to evaluate both air-cleaning and barrier-type CSTDs. NIOSH published an early draft of a unified test protocol, “A Performance Test Protocol for Closed System Transfer Devices Used During Pharmacy Compounding and Administration of Hazardous Drugs,” in September 2016 and requested public comment.

Q1: In what situations can the initial Draft CSTD protocol be used?

Q2: Recently, I have seen claims about CSTDs that have already “passed” the Unified CSTD test protocol applicable to both barrier and air-cleaning types of CSTDs. Is that possible?

Response: NIOSH is aware of articles and advertisements reporting CSTD performance results that state they are based on NIOSH’s draft Unified test protocol (CDC-2016-0090, Docket Number NIOSH–288-A, September 15, 2016). However, a Unified test protocol has not been finalized; it is incomplete and many key components are being addressed, such as selection of evaluation surrogate(s), the associated surrogate concentrations, sampling and analytical methods, and even the test chamber design. In addition, NIOSH does not anticipate publishing pass/fail criteria as part of the final protocol. Such criteria will depend upon the protocol’s specific application. Just like the first protocol however, NIOSH may incorporate guidance that assists protocol users in determining their own pass/fail performance metrics.

Q3: Can NIOSH provide a progress update on what has been done since the last public update in October 2019?

Response: NIOSH has been continuing to evaluate several key components of the unified test protocol for both barrier-type and air-cleaning CSTDs. NIOSH is evaluating propylene glycol methyl ether (PGME) as a potential surrogate for testing both with and without the presence of a volatile diluent. Regarding sampling and analytical methods, NIOSH is investigating the use of Fourier-transform infrared spectroscopy (FTIR) (Date of update 05/19/21).