UPDATE
Terminology Clarification: This page uses the term ‘aerial lifts’ as an overarching term to capture multiple types of lifts, such as scissor lifts and boom lifts. Please note both OSHA and ANSI standards vary for different types of lifts. 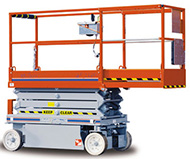 NIOSH has completed several physical tests in a laboratory setting to evaluate the responses of an aerial lift under different ANSI and OSHA, as well as lift manufacturer recommended, safe operating conditions and limits. Before this took place, the scheduled laboratory testing, as well as other scenarios, were tested in a virtual computer environment. This allowed NIOSH researchers to identify how the lift would respond to different loading and input forces before the aforementioned testing took place, and also allowed them to determine if some testing could be too hazardous to complete in the lab (such as a lift tip over).

The videos shown below are from the simulated environment and were completed using the MSC ADAMS multibody dynamic software. This software focuses on dynamics responses and is physics based, thus closely mimicking how the aerial lift would respond in real world testing scenarios.

Curb Impact With Operator: Test showing impact of the scissor lift at its maximum height with a worker operating the unit. Upon impact the worker becomes unstable due to the stop.

Curb Impact: A lift at maximum height was tested against the ANSI A.92-2006 standard 4.8.4.1 Curb Test which states: A dynamic stability test shall be performed on the maximum slope for which the aerial platform is rated by the manufacturer up to and including maximum travel height. The platform shall carry a test load whose center of gravity is located 6 inches (0.15m) above the platform floor and distributed over the leading half of the platform and equal to 1.33 times the rated work load. The machine shall be driven at its maximum attainable speed for that configuration into a fixed curb high enough to stop the machine.

Manikin Drop: Simulation shows a misuse scenario in which a worker has tied off to the top rail of the scissor lift with a 6 foot lanyard. ANSI A.92 4.13.5 Anchorage(s) for Personal Fall Protection states: Aerial platforms designed to allow use with the guardrail system or sections of the guardrail system removed shall have anchorage(s) for personal fall protection conforming to the following requirements: (1) The location of the anchorage(s) shall be identified and the number of anchorages shall equal or exceed the number of rated occupants, (2) More than one occupant may attach to a single anchorage if the anchorage is rated for more than one person, (3) When provided, each anchorage shall be capable of withstanding a static force of 3,600 lb. (16,000 N) for each person allowed by the manufacturer without reaching ultimate strength. The strength requirement shall only apply to the anchorage(s) and their attachment to the aerial platform, and (4) The anchorage(s) shall be positioned to minimize lanyard slack.

Pothole Tip Over: Simulation shows a lift entering a depression that was larger than the ANSI A.92 standard 4.8.4.2 Depression test which required that a “pothole protection” device be engaged, states: A dynamic stability test shall be performed on the maximum slope for which the aerial platform is rated by the manufacturer up to and including maximum travel height. The platform shall carry a test load(s) whose center of gravity is located 6 inches (0.15m) above the platform floor(s) and distributed over the leading half of the platform(s) and equal to the rated work load. The machine shall be driven into a 24 inch (0.60m) square hole with a vertical drop of 4 inches (0.10m) at its maximum attainable forward speed for that configuration with one front wheel aligned perpendicular to the edge of the test hole. The test shall also be performed at the maximum attainable reverse speed for that configuration with one rear wheel aligned perpendicular to an edge of the test hole. In both the forward and reverse tests the steer wheels shall be parallel with the length of the machine.

Resonance: Simulation video shows a scenario in which a push/pull type of force is put upon the top rail of the lift while at its maximum height and loaded according to the A.92 standard. This force is oscillated to try and achieve instability of the lift such as if a worker were pushing/pulling on an external object. The findings were that the platform moved enough that a worker’s postural stability could be compromised.

Tilting: Video shows a fully loaded platform that was raised to maximum height at which point the slope of the ground base for the lift began to affect the stability of the lift; it began to tip over. The base was continually sloped until the lift became unstable and fell over. The lift passed the A.92 standard 4.8.3 for static load on a test slope which states: The aerial platform shall be tested on a slope 5 degrees greater than the slope for which it is rated by the manufacturer. The test shall be conducted: (1) While sustaining static vertical load equal to 1.33 times the rated work load of the platform applied to the platform floor surface at a location 12 inches (0.30m) inboard from the railing or floor transition, or on the platform centerline, whichever places the center of gravity of the load closest to the guardrail. (See Figure 2C and 2D on page 38.) (2) With no load on the platform. When intended configurations include multiple platform floor zones with individual rated work loads, each platform floor zone shall be loaded, based on its rating and the above requirements.

Wind Force: This video shows a fully loaded scissor lift at maximum height with a large box attached to the platform in a vertical plane. The wind speed was increased and the lift became unstable and tipped over. ANSI A.92 indicates that an aerial lift operator should not carry objects larger than the platform and the lift should not be operated in adverse weather conditions.