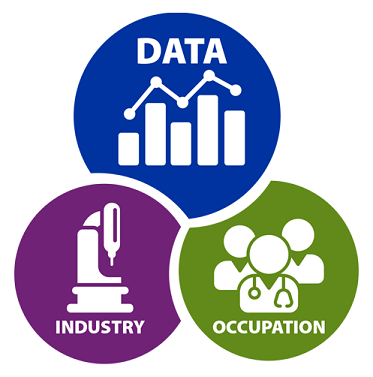 NIOCCS is a web-based software tool designed to translate industry and occupation (I&O) text to standardized I&O codes. It is used by occupational researchers, federal government agencies, state health departments and other organizations that collect and/or evaluate information using I&O. Its purpose is to provide a tool that reduces the high cost of manually coding I&O information while simultaneously improving uniformity of the codes.

NIOCCS is available free of charge and requires only internet access and a web browser for use. Users are required to register for a NIOCCS account if they wish to upload files of records for coding.

NIOCCS is available free of charge and requires only internet access and a web browser for use.  Many features of the system do not require a NIOCCS user account, such as Single Record Coding and the Census Industry and Occupation Alphabetical Index Lookup.  To perform coding of an entire file of records, a user account is required.

The diagram and steps below outline the process for using NIOCCS to code a file of records.

The NIOCCS industry and occupation (I&O) coding process is based upon the U.S. Census Bureau I&O Alphabetical Indexes supplemented with special codes developed by CDC/NIOSH for non-paid workers, non-workers, and the military (see NIOSH I&O coding documentation for more information).

The Census Alphabetical Index of Industries and Occupations lists industry and occupation titles used most often in the economy.  These indexes were developed by the U.S. Census Bureau for use in classifying a respondents industry and occupation as reported in Census Bureau demographic surveys.  These indexes list over 21,000 industry and 31,000 occupation titles in alphabetical order.  Each title has been assigned a Census Industry Code or Census Occupation Code.  Additionally, the associated North American Industry Classification System (NAICS) code or Standard Occupational Classification (SOC) code is also provided for each title.  For more detailed information about the Census Alphabetical Indexes, go to the U.S. Census Bureau website at:  https://www.census.gov/topics/employment/industry-occupation/guidance/indexes.htmlexternal icon

NIOCCS codes input I&O narratives, or NAICS codes instead of industry narratives, to Census I&O codes for the user specified target Census I&O Classification year.  Once coded, the NAICS and SOC codes associated with the Census code in the alphabetic index are included in the output results.

A high level view of the NIOCCS autocoding process is illustrated in the diagram below. Click on the diagram boxes for details of each process.

Standardized I&O narrative inputs are used by the NIOCCS candidate generation process to produce lists of candidate lines from their respective alphabetic indexes.

For inputs using NAICS codes rather than industry narratives, the input NAICS codes are validated and automatically crosswalked to the equivalent NAICS codes for the specified NAICS published year. The resulting crosswalked NAICS codes serve as the industry candidate lines in this form of I&O input.

Codes in the Census Alphabetical Indexes sometimes have restriction rules associated with them.  These rules are used to ensure occupation codes selected for a given industry are valid; and vice versa for industry codes.

If a single remaining I&O pair has the highest remaining pair score, then the autocoder selects that I&O pair.

If more than one of the remaining I&O pairs share the highest remaining score, then tiebreakers will be used where possible to select one the these highest scoring I&O pairs.

Tiebreaker #2:  Bureau of Labor Statistics (BLS) occupation employment totals for each pair’s NAICS/SOC combination are examined. I&O pairs with employment totals that occur much more frequently than others among the best scoring pairs may be selected under some circumstances.

I&O inputs with an I&O pair selected are autocoded. Otherwise, I&O candidate lines and I&O pairs are saved for review and possible selection during manual coding using the computer-assisted coding features of the system.

All selected industry lines are paired with all selected occupation lines, and the pairs are scored by combining their industry line score and their occupation line score. The highest scoring pairs are the “MAIL DELIVERY” and “TRUCK DRIVER” pairs. Restrictions are applied in the highest scoring pairs, and pairs associated with “TRUCK DRIVER” occupations lines that are for drivers of semi-trucks are eliminated because their industry restriction does not include the “MAIL DELIVERY” industry line’s industry code.

The autocoder selects all occupation lines containing “DRIVER”. All lines containing more words than just “DRIVER”, such as “TRUCK DRIVER” are penalized. There are several “DRIVER” occupation lines in the occupation index, and these lines receive the highest score.  Similar to “TRUCK DRIVER” in example #1, the “DRIVER” lines are for different types of drivers, including drivers of semi-trucks, drivers of light trucks used for delivery, and drivers of taxicabs. These “DRIVER” lines differ from each other by the occupation codes they categorize and by their industry restrictions.

Once restrictions are applied, only 3 pairs remain. There isn’t enough information for the autocoder to select between beer manufacturing, beer wholesale and beer retail. Therefore, the I&O narrative inputs are not autocoded, and the selected I&O index lines and I&O pairs are saved for review and possible selection during manual coding using the computer-assisted coding features of NIOCCS.

Baseline performance measures for NIOCCS autocoding are based on accuracy rates of the data that is autocoded by the system.  The accuracy threshold for NIOCCS is 10% or less error rate found in autocoded records.  NIOCCS accuracy rates are continually monitored for all files submitted by NIOSH to ensure the accuracy threshold is met.  For NIOSH V3.0, accuracy was tested using large sets of records that were coded and verified by NIOSH trained I&O coders.

Production rates are determined by calculating the percent of records coded automatically by NIOCCS. It is important to note that the quality of data input for coding can result in very different autocoding production rates. Using the benchmarks set for coding accuracy, the average NIOCCS production rates for autocoding over time are shown below.  These percentages are based on internal NIOSH data submissions to NIOCCS using the High Confidence Level option in Versions 1.0 and 2.0.

Coding results will vary and depend upon overall quality of the source data.  Structured and detailed data sources will have higher accuracy and production rates than data sources with long and complex text, unintelligible text, or insufficient information.

NIOCCS uses only the industry and occupation text to assign codes. Records that contain employer name and/or job duties will not code at the same rate of accuracy as records containing only industry and occupation. This is because the additional pieces of information (employer and job duties) can conflict and/or provide more detailed information that could alter the I&O codes assigned. Including this information can be helpful however when using the computer-assisted coding module to ensure that appropriate codes are assigned manually.

User internet bandwidth will significantly affect the interactivity of the computer-assisted coding.
The auto-coding process may take a significant amount of time when the volume of the data to be coded is significantly large. The turnaround time for autocoding may also depend on the traffic in the queue of coding jobs.

Upload file size is currently (as of December 2017) limited to 30MB. The number of records this equates to will vary depending on how many of the optional fields on the input file format are used. For files that use the slim file format (ID, Industry Occupation), it equates to approximately 300,000 records.  It is recommended however to limit file submissions to no more than 100,000 records at a time otherwise the performance of the computer-assisted coding user interface will be diminished.

NIOCCS is a tool used to code Industry and Occupation. NIOCCS will autocode most of the records, but the remaining will require manual coding, using the computer-assisted features of this system.

We provide I&O coding training classes a few times a year.  See our Training and Consultation page for more information.

For comments, questions, or problems using NIOCCS, send an email to NIOCCS@cdc.gov