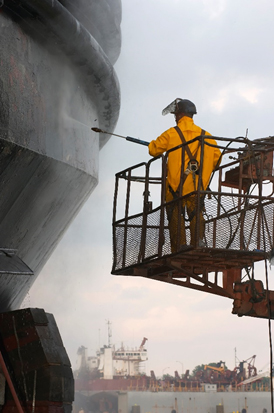 A worker pressure washes a vessel prior to repair. Photo by: GlenJ. Thinkstock Plus.

Shipyard workers are involved in the manufacture, repair, maintenance, and dismantling of boats and ships. The work involves activities such as welding and cutting steel, machining, plumbing, electrical work, rigging, painting, cleaning and removal of paint and other coverings, and cleanup of chemical and fuel residues.

There are a variety of workplace hazards found in shipyards. These include chemical hazards such as exposure to asbestos, welding fumes, and a variety of paints, solvents, and fuels. There are also physical hazards such as noise exposure, extreme temperatures, vibration, awkward body positions, and the risk of musculoskeletal injuries. Hot work, confined space entry, exposure to hazardous air, and work done at height all increase the risk of injury. Shipyard workers may work above water while a vessel is docked, introducing a fall hazard that may lead to drowning.

Chronic illness is also a concern for long term shipyard workers. Respiratory illness caused by fume and smoke inhalation and exposure to heavy metals, such as lead, are of particular concern in shipyard workers. Excess cancer morbidity has been detected in several groups of shipyard workers, especially cancers of the respiratory system,1-4 with welders appearing to be at particular risk.5 Another study found an increased risk of leukemia in electricians and welders working in a naval nuclear shipyard.6

There are approximately 165,000 workers 7 employed in shipyards in the U.S., spread across 26 states bordering coastal and inland waters. Between 2011 and 2017, there were at least 45 fatal accidents (4.0 per 100,000) among shipyard workers,8 higher than the rate for all U.S. workers. There were an estimated 61,600 nonfatal injuries/illnesses during the same period (5,370 per 100,000), nearly twice  the rate for all U.S. workers, and one of the highest injury/illness rate among maritime workers.9