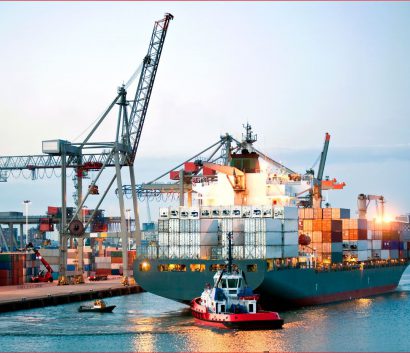 Maritime work environments are dynamic, with a wide variety of hazards. Image credit: iStock/Getty Images Plus

Marine terminals are points of transfer for cargo loading and unloading as it is transferred from ships to rail and trucks. Loading and unloading of ships requires a variety of loading equipment, knowledge of techniques for lifting and stowing cargo, and the proper handling of hazardous materials. There are more than 3,700 marine terminals and 1,400 inter-modal connections in the United States. The cargo moved through U.S. marine terminals contributes more than $500 billion to the U.S. GDP and 99% of the volume of overseas trade enters or leaves the U.S. by ship.1

Marine terminals are dynamic environments with high vehicle traffic including a variety of powered industrial equipment, semi-trucks, and passenger vehicles. Longshoring work involves strenuous, physical labor. The hazards of the work include subjection to extreme temperatures, heavy lifting, repetitive motions, work in awkward postures, chemical exposures, work in enclosed spaces, and working around dangerous machinery. In addition, longshoremen work moving containers and other heavy bulk loads with the potential to cause serious injury or death if a mistake is made.

Workers in marine terminals and port operations have higher fatality, injury and illness rates than other workers in the U.S. In 2017 there were approximately 98,000 workers in marine terminal and port operations in the U.S., many of them employed in longshoring work.2 From 2011–2017 fatal injuries occurred at an annual rate of 15.9 per 100,000 workers,3 a rate  five times that of the U.S. workforce overall. In the same period, there were also an average of 4,916 nonfatal injuries/illnesses per 100,000 workers each year,4 nearly double that of the U.S. workforce overall.