On May 7, 1998, a 43-year-old male Fire Suppression Technician (the victim), who had 20 years of experience with the fire department, was involved in a maze training exercise, and experienced difficulty; however, he completed the required evolution. The victim had gone on duty for a 24-hour shift at 1145 hours on May 6, 1998, and the maze training was scheduled for 0800 hours on May 7, 1998. During the exercise, the victim hit his head twice, once at the bottom of a segment that has descending steps, and once on a wooden panel slide-door. The victim was questioned by the instructor on both occasions if he was alright and if he wanted to finish the evolution. The victim stated he was alright and wanted to complete the evolution. The victim completed the maze evolution and later that day he became ill and was taken to the emergency room by his wife. The victim was hospitalized later that month for seizures, subsequently released from the hospital, remained under a doctor’s care, (but was not released for duty) and died in January 1999.

NIOSH investigators conclude that, to minimize the chances of similar occurrences, fire departments should:

On May 7, 1998, several veteran fire fighters were involved in a maze training evolution at a local Army training facility when one of the fire fighters, a Fire Suppression Technician (the victim), experienced trouble in the maze, but managed to complete the evolution. The victim in this incident complained of a sore back after completing the maze evolution, and was taken to the hospital emergency room later that day by his wife, complaining of head and back injury, and nausea. However, he was not hospitalized until May 29, 1998, when a grand mal seizure was sustained. The victim remained under a doctor’s care, (but was not released for duty) and died on January 22, 1999.

The fire department requires maze training for all new recruits, and on a periodic basis for veteran fire fighters. The maze (see maze diagram), built in the early 1980s, was designed to present realistic conditions that a fire fighter may encounter during emergency conditions, and it requires acute mental and physical conditioning to complete. The maze is constructed of plywood, painted black to create a dark environment, and presents the following problems/obstacles: a tunnel entrance (27-inches high by 35-inches wide), narrow passages, inclines, one-way doors, dead ends, sudden drops, steep-uneven stairs (down), negotiation of tight turns, difficult passages, and a ladder (see maze diagram). All maze candidates are given a briefing by the maze instructor prior to beginning the evolution, and are informed on how to traverse difficult parts of the maze.

On March 30 and 31, 1999, an investigation of this incident was conducted by the NIOSH Senior Fire Fighter Investigator and a Captain with the Operations Bureau, Long Beach Fire Department, Long Beach, California. NIOSH received requests to conduct this investigation from the International Association of Fire Fighters (IAFF), the Mayor of the City, and the Chief of the Fire Department. The primary purpose of the investigation was to evaluate the circumstances of this incident and provide recommendations regarding the safety of the maze training evolution. Meetings and interviews were conducted with the Chief of the Fire Department, the Chief of Training, the Chief of Safety, an attorney with the City Attorney’s Office, the President of the Local IAFF Union, the President of the Mexican/American Fire Fighters International Association (MAFFIA), officers and fire fighters that were in maze training the day of the incident, and fire fighters that had worked with the victim. A site visit was conducted of the training maze and photographs of the interior and exterior were taken. During the site visit to the maze, and at our request, a Lieutenant Instructor donned full protective clothing and an SCBA and traversed the maze, allowing us to photograph him at various locations, to demonstrate the difficulties that may be encountered. The fire department provided extensive information and recommendations for maze training.

Information provided by the fire department indicates that between 1982 and March 1999, approximately 900 fire fighters have completed maze training, with less than 5 fire fighters sustaining a lost time injury due to sprains and strains.

On May 7, 1998, at 0800 hours, Pumper 23 reported to the “situation maze” building for training. At approximately 0930 hours, the four-member crew (Lieutenant, Fire Suppression Technician (the victim), and two firefighters) entered the foyer of the maze building for a briefing. The victim was assigned to Pumper 21 but was taking this training as make-up training with Pumper 23 crew. He was due to finish his 24-hour shift at 1145 hours. All four fire fighters had been through the maze at least once before. The briefing consisted of going over the following ten Mandatory Safety Rules with the instructor. The rules are taken directly from the “Situation Maze” training manual:

The fire fighters are then ushered into the “instructor’s corridor”. This provides the fire fighters with a lighted view of the maze from the top (the instructor’s perspective). Advice on how to proceed through the maze was given and questions were answered. All crews are advised to review the “situation maze guide” that is issued to every station several shifts prior to participating in the maze. There are two instructors inside the maze during the evolution (always a one-on-one). The two instructors are in two separate geographic areas of the maze (the instructor’s walkway is dimly lit by small red lights). They took turns monitoring each fire fighter – depending on his location, observing each fire fighter through openings or hinged sections of the maze that could be opened. As they accompanied each fire fighter through the maze, they were in constant contact, either through surveillance or verbal communication (the instructor can easily follow the fire fighters by the sounds made in the tunnels and by the SCBA). Approximately halfway through the maze, in Segment 7 (see diagram), the victim bumped his head on the ½-inch plywood wall at the bottom of the incline. The instructor asked him, Are you O.K.? He received no response, however he heard the victim continue through the maze, now entering Segment 8. The victim then turned to the right and started head-first down Segment 8 on his hands and knees. Upon reaching the end of Segment 8, he bumped his head against the ½-inch plywood sliding door. The instructor placed his hand on the victim and asked once again, Are you O.K.? This time the victim responded, “yes.” The instructor then asked, Do you want to continue?, and the victim replied, “yes”. He proceeded through the maze, which included correctly coming back through Segments 7 and 8 , and finished the maze without any further problems. Upon exiting the maze the victim was assisted in taking off his SCBA. When asked how he felt, he responded, “My shoulder and back ache.” This was a common complaint from fire fighters completing the maze evolution. He then stated that he had used less than half of his air. A few minutes later, the crew of Pumper 23 returned to the station. The shift change took place at 1145 hours, and the fire fighters went home. Later that day, the victim had his wife (a certified paramedic) take him to the emergency room. He complained of headache, backache, nausea, and dizziness. The emergency room physician examined him and took an x-ray of his cervical spine. The x-ray showed no fractures or abnormalities. The attending physician advised the victim to see his own physician the following day and to schedule a “CAT-Scan.” The next day the victim made an office visit to a chiropractor. Subsequent visits to the same office took place once a week for a total of three visits. Sometime after the third week he suffered a seizure. After being transported to the hospital and stabilized, he was seen by a neurologist. A diagnosis of fractured 4th, 5th, and 6th thoracic vertebrae, a respiratory infection and sepsis was made. He was seen by a neurologist approximately once a month for the 5 five months. Early on the morning of January 19, 1999, while eating at home, he suffered a seizure, aspirated and went into cardiac arrest. His wife began CPR and called 911. The fire department responded and initiated Basic Life Support. Shortly thereafter the paramedics arrived and performed Advanced Life Support. They transported the victim to the nearest emergency room where they were able to regain a heartbeat. He was transferred to the intensive care unit where he expired 2 days later.

According to the certifying physician, the immediate cause of death was cardiopulmonary arrest leading to anoxic brain injury. Underlying causes were aspiration secondary to seizure, and seizure disorder secondary to head injury (May 1998).

Recommendation #1: Fire departments should consider scheduling fire fighters for maze training at times other than at the completion of a 24-hour shift.

Discussion: The profession of a fire fighter is inherently dangerous, not only on the fireground, but the drillground as well. It is physically demanding and requires the firefighter to be mentally alert at all times. Often the fire fighter must react quickly, without hesitation, to avoid injury. Fire fighters completing a 24-hour shift may not be in the best mental and physical condition to complete an exhausting evolution such as the situation maze.

Recommendation #2: Fire departments should use a pre-screening questionnaire to determine a fire fighter’s physical and mental status prior to undertaking maze training.

Discussion: Fire fighters who are taking medications (prescription or over-the-counter) which could possibly compromise their safety or the safety of others, especially in emergency situations, e.g., fireground or emergency rescue operations, drills and training operations, that are physically demanding, like the situation maze, should consider refraining from those operations. The following questionnaire could contain, but not be limited to the following questions:

Recommendation #3: Fire departments should de-emphasize time as a factor for completion of the maze evolution and retraining for unsuccessful attempts.

Discussion: Training instructors should emphasize the positive side of training and the need for such training, e.g., responding to emergency situations and the need for mental and physical discipline. The training maze is a mentally and physically demanding evolution and it is conceivable that some veteran fire fighters are under peer pressure to successfully complete the evolution. Instructors should encourage successful completion of the maze, but not stress time limitations and possible retraining for unsuccessful fire fighters.

Recommendation #4: Fire departments should evaluate the rungs of the ladder in the maze – recommend the distance from the wall to the rungs be increased to allow a safe footing when climbing.

Discussion: During the site visit to the maze, it appeared the ladder could present a problem, i.e., the rungs of the fixed ladder were close to the wall, thereby, not allowing enough room for the candidates to establish a safe footing on each rung. The rungs should be of sufficient distance from the wall to allow for safe footing. 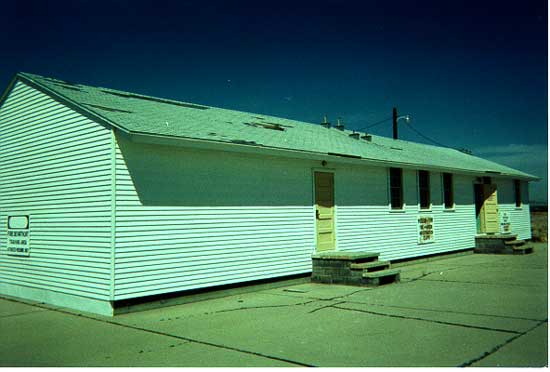 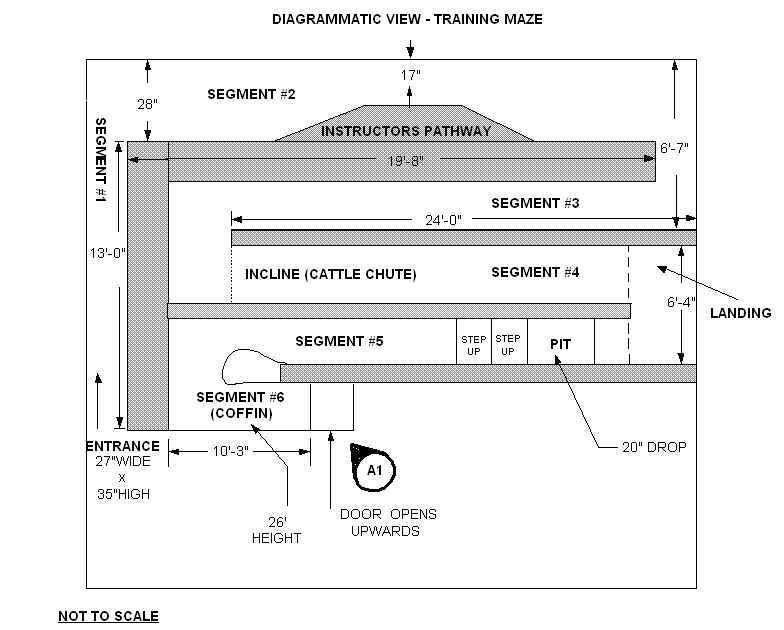 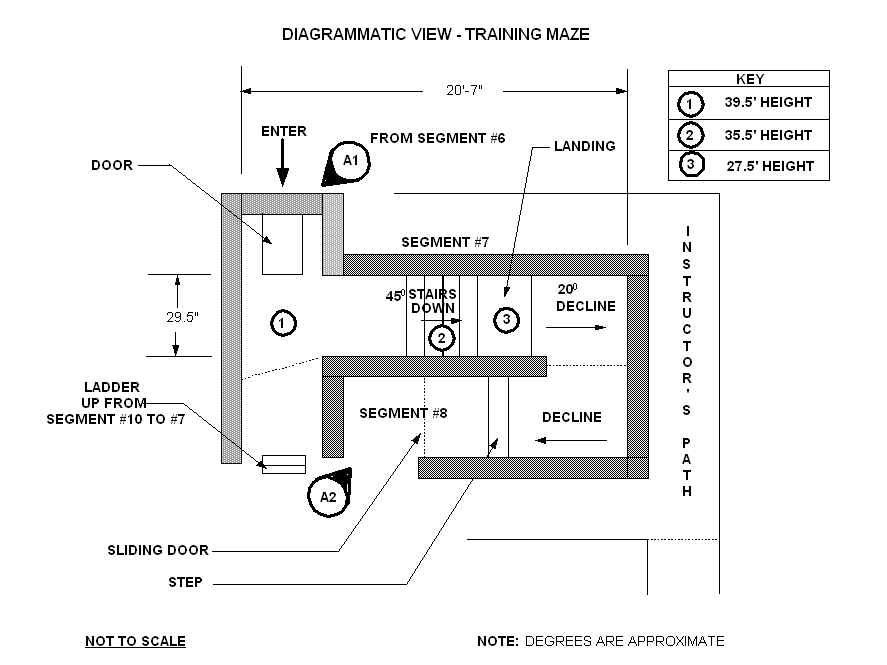 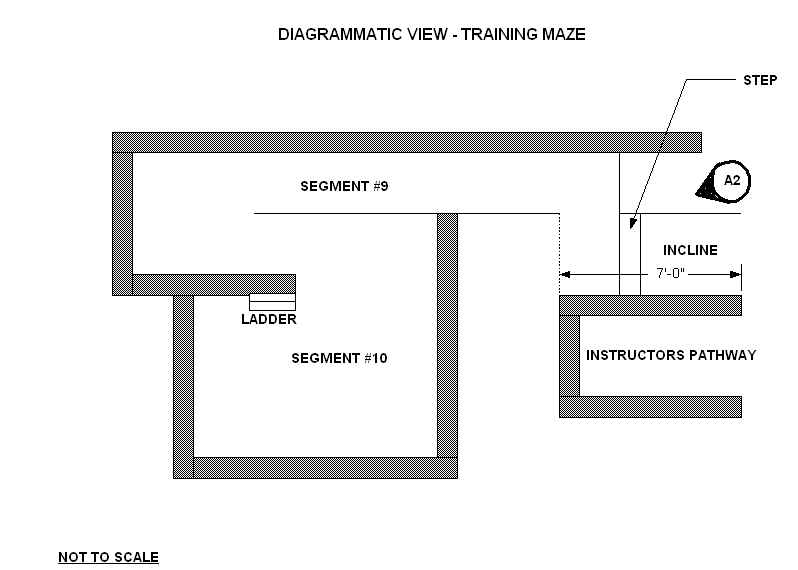