On August 29, 1998, two male volunteer fire fighters, a 35-year-old (Victim #1) and a 21-year-old (Victim #2), died of smoke inhalation while performing separate tasks during a fire at a commercial building (strip mall). Victim #1 was the nozzle man during an interior attack on one of the five stores comprising the commercial building, while Victim #2 was attempting to ventilate the roof of the same store when the roof collapsed. The two fire fighters were members of a volunteer engine company who responded to the fire at 0102 hours. The Chief and Assistant Chief arrived on scene at 0104 hours. The Chief assumed the duties as the Incident Commander (IC) and reported fire in the storage room in the rear of one of the stores. Within minutes, the IC called for additional backup and a neighboring volunteer fire department responded. Victim #2 and a fire fighter were assigned to ventilate the roof, while Victim #1 and a fire fighter and the Chief from a neighboring department started an interior attack on the same store. After about 25 minutes on the fire scene, the roof collapsed, trapping Victim #1 inside the store. The Chief and fire fighter who were with Victim #1 escaped. At the same time, but unknown to all other personnel at the scene, Victim #2 had fallen through the roof inside the same store and was also trapped. Although an attempt was made to locate Victim #1, who was 15 feet inside the front doorway and not wearing a PASS device, fire fighters could not locate him. Also, both fire departments had exhausted their breathing air supply and could not make any more rescue attempts until additional bottles of breathing air arrived. About 0150 hours, Victim #2 was discovered missing. At 0330 hours, after additional bottles of breathing air arrived, further rescue attempts were made and Victim #1 was located and removed from the structure. Victim #2 was located and removed during overhaul of the building around 0600 hours. NIOSH investigators concluded that, to minimize similar incidents, fire departments should:

Additionally, owners of commercial buildings should

On August 29, 1998, two male volunteer fire fighters, a 35-year-old (Victim #1) and a 21-year-old (Victim #2), died of smoke inhalation while fighting a fire at a commercial building (strip mall). At approximately 0056 hours, a fire department comprised of two engines, was dispatched to a fire at a strip mall consisting of five separate stores. About 15 minutes into the fire, Victim #2 was directed to the roof of one of the stores by the IC to ventilate the building while another fire fighter stood on the ladder. The fire fighter standing on the ladder was removed and given a duty elsewhere. At an undetermined time, Victim #2 fell through the roof and was later found dead. Approximately 25 minutes into the fire, Victim #1, a fire fighter, and Chief from a neighboring volunteer department entered the structure through the front door of the same store being ventilated to attack the fire. A few minutes after they were inside the structure, the roof collapsed, trapping Victim #1. The Chief and fire fighter escaped with minor injuries. An attempt was made to rescue Victim #1, which exhausted the fire department’s breathing air supply. Further rescue attempts could not be made until additional bottles of breathing air arrived. (While they attempted to rescue Victim #1, the fire department did not realize that Victim #2 had fallen through the roof). The fire departments then attempted to extinguish the fire by using a local utility company’s bucket truck, putting heavy amounts of water on it. At about 0330 hours, Victim #1 was located and removed. During overhaul of the building, at about 0600 hours, Victim #2 was located and removed.

On September 16, 1998, two Safety and Occupational Health Specialists from NIOSH investigated the incident. A meeting was conducted with members of the fire department, including the Chief, Assistant Chief, Truck Captain, and the remaining fire fighters who responded to the fire. A site visit was conducted, photographs of the incident site were taken, and an estimated time line of the incident was developed.

The fire department involved in the incident is comprised of 23 volunteer members and serves a population of 1,750 people in a geographic area of 10 square miles. No training is required to become a volunteer fire fighter in this State; however, the State does provide two in-house courses to the department each year. The training is designed to cover personal safety, SCBA/Rescue, everyday fire, LP-Gas tactics & live fire drills, structural fire attack, arson detection for the fire, apparatus operation and foam response. Victim #1 had 3 years of experience and Victim #2 had 4 years of experience. The State provides all applicable training for the department.

Although four volunteer fire departments were involved in this incident, only those directly involved up to the time of the fatal incidents are mentioned in this report.

The site of the incident was a one-story, commercial building with a brick front exterior and concrete block sides and back. The building consisted of five individual stores with common walls. The roof of the store where the fire occurred was about 30 feet wide, consisted of 2-inch x 10-inch wood joists, and was covered with plywood sheathing and asphalt material (tar). The back wall of the building had been extended several feet for an addition (the ceiling consisted of wooden roof trusses made of 2-inch x 4-inch wooden studs). A partial parapet wall located in the front of the building extended partially down each dividing wall on the store roofs. A drop ceiling was installed with 2-foot by 2-foot tin tiles which were nailed to 1-inch by 4-inch wood runners. The building also included a one-story, attached addition in the rear of the building which was being used for storage. This storage room had been constructed of concrete block and had a wooden, pitched roof which was covered with asphalt roofing material. None of the stores, including the storage room, was equipped with smoke alarms or sprinkler systems.

According to the medical examiner, the cause of death for both victims was smoke inhalation.

Recommendation #1: Fire departments should use defensive firefighting tactics when they do not have adequate apparatus, equipment and training .1

Discussion: A trend in the fire service is that some smaller, combination part-paid and volunteer fire companies are adopting the aggressive firefighting tactics of larger, paid departments. Some volunteer departments are switching from large diameter defensive hose to smaller diameter interior firefighter hose. They are switching from outside attack to aggressive interior attack, and accessing on roofs above fire and performing other dangerous tactics. Some of these smaller fire departments do not have the training, equipment and back-up personnel to safely accomplish these dangerous tactics.

Recommendation #2 Fire departments should ensure that accountability for all personnel at the fire scene is maintained.2,3

Discussion: Accountability on the fire ground is paramount and may be accomplished by several methods. It is the responsibility of every officer to account for every fire fighter assigned to his or her company and relay this information to Incident Command (IC). A fire fighter should communicate with the supervising officer by portable radio to ensure accountability and indicate completion of assignments and duties. One of the most important aids for accountability at a fire is the Incident Command System (ICS). As a fire escalates and additional fire companies respond, communication assists the IC with accounting for all fire fighter companies at the fire, at the staging area, and at rehabilitation. The IC did not have the ability to identify where each fire fighter was on the fireground. In this incident, the IC directed Victim # 1 to enter the building with the fire fighter and Chief from the back-up department, but since the interior attack crew was not equipped with a portable radio, there was no way of determining when the crew encountered trouble. At the time when Victim #1 was discovered missing, the IC did not realize that Victim # 2 was also missing. With an accountability system in place, the IC may readily identify the location of all fire fighters on the fire ground. Additionally, the IC would be able to initiate rescue within minutes of realizing a fire fighter is missing.

Discussion: An ICS should be defined and documented in writing, describing standardized guidelines for each situation, including routine and unusual incidents. The system should establish roles and responsibilities for all personnel involved. It should ensure personnel accountability and safety, and should provide a well-coordinated approach to all emergency activities. All fire department personnel should be thoroughly trained on this system and receive periodic refresher training and all training should be documented. Moreover, an ICS becomes more difficult when several fire departments respond to the same incident; therefore, a type of unified command system may have to be established. The unified command system can be used to coordinate command of the incident when several departments arrive on the scene. If an ICS had been implemented, these fatalities might not of occured.

Discussion: Many safety precautions should be taken to ensure fire fighters’ safety when conducting vertical ventilation, including, but not limited to, conducting pre-incident planning and inspections to identify buildings with wooden trusses or weakened roofs. At least two fire fighters should be on the roof to ensure personal safety, and the ranking fire fighter on the roof should be in constant communication with the IC by utilizing a portable radio. At the time Victim #2 started to vent the roof, another fire fighter was on the ladder. However, when the fire fighter on the ladder was removed, Victim #2 continued the ventilation without another person on the ladder. Victim #2 did not have a portable radio to notify the IC of his condition and location. Additionally, the fire department did not have any SOPs for ventilation.

Recommendation #6: Fire departments should ensure that Rapid Intervention Teams be established and in position immediately upon arrival at the fire scene.6,7

Discussion: A Rapid Intervention Team should be positioned to respond to every major fire. The team should report to the officer in command and remain at the command post until an intervention is required to rescue a fire fighter(s). The Rapid Intervention Team should have all the tools necessary to complete the job, e.g., a search rope, rescue rope, first-aid kit, back-up air, and a resuscitator for use if a fire fighter becomes injured. The fire department’s rescue attempts were confined due to limited back-up air.

Recommendation #7: Fire departments should strictly enforce the wearing and use of PASS devices when fire fighters are involved in fire fighting, rescue, and other hazardous duties.6

Discussion: The PASS device is a small electronic device worn by fire fighters which will emit a loud and distinctive audible alarm if fire fighters becomes motionless for more than 30 seconds. Fire fighters can also activate the alarm manually if needed. Neither of the victims was equipped with a PASS device. A PASS device would have assisted the fire fighters attempting to locate Victim #1, who was only 15 feet inside the store.

Discussion: Sufficient SCBAs should be available at the incident to provide one unit for each member who might be exposed to respiratory hazards. Reserve cylinders or an on-scene refill capability should be available to provide a reserve air supply. The fire department did not have a sufficient amount of reserve air supply and the location of the air refill was not on the scene. Therefore, the fire department could not perform rescue attempts until additional units arrived.

Recommendation #9: Owners of commercial buildings should ensure that smoke alarms and sprinkler systems are installed and operable.8

Discussion: Fire detection and automatic suppression are extremely important in the control of aggressive fires in buildings and remain the most dependable form of fixed fire protection. If these buildings had been equipped with smoke detectors and an automatic sprinkler system, it may have controlled the spread of the fire. 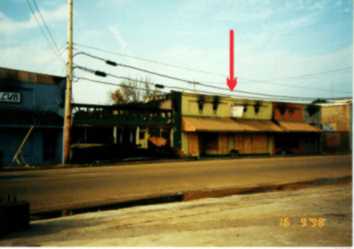