On April 9, 1998, 20 fire fighters from a volunteer fire department responded to a propane tank fire located at a turkey farm about 2.5 miles from the fire department. Upon arrival at the fire scene a decision was made to water down the buildings adjacent to the propane tank and allow the tank to burn itself out since the tank was venting. Some of the fire fighters positioned themselves between the burning propane tank and the turkey sheds and were watering down the buildings as the remaining fire fighters performed other tasks, e.g., pulling hose and operating pumps.

Additionally, owners and users of propane tanks should: 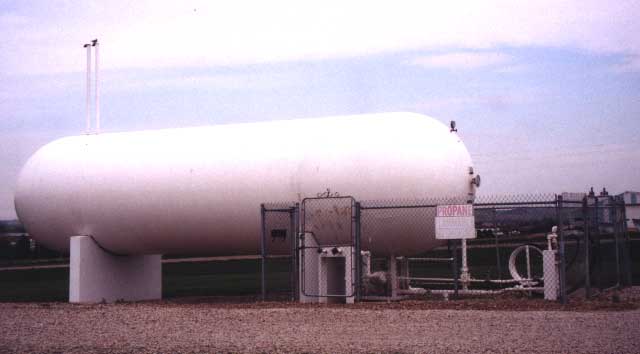 (similar to tank which exploded).

On April 10, 1998, the United States Fire Administration notified NIOSH of the deaths. On April 15, 1998, two Safety and Occupational Health Specialists, Richard Braddee and Frank Washenitz, traveled to Iowa to conduct an investigation of this incident. Meetings were held with the Iowa State Fire Marshal, the 1st and 2nd assistant chiefs of the fire department involved in the incident, the State OSHA inspectors, representatives from the U.S. Chemical Safety and Hazard Investigation Board, and the local police department. Copies of photographs and measurements of the incident site were obtained along with the medical examiner and police department reports, and a site visit was conducted.

The volunteer fire department involved in the incident serves a population of 850 in a geographic area of 100 square miles, and is comprised of approximately 25 volunteer fire fighters. The fire department provides all new fire fighters with 24 hours of mandatory training. The training is designed to cover personal safety, forcible entry, ventilation, fire apparatus, ladders, self-contained breathing apparatus, hose loads, streams, and special hazards. The victims had 15 and 16 years fire of fighting experience, respectively.

On April 9, 1998, at 2311 hours, a call came into the fire department regarding a turkey barn fire at a turkey farm about 2.5 miles from the department. The Chief in the command car #1190, and 19 fire fighters in Pumpers #1193 and #1194, Tanker #1195, Emergency Van #1196, and two private vehicles were dispatched to the scene. En route to the scene the Chief advised the command center that the fire involved a large propane tank and not a turkey barn. All the fire fighters arrived on the fire scene between 2314 and 2317 hours. At about 2305 hours two people riding a 4-wheel, off-road vehicle struck one of the two fixed metal pipes between the propane tank and the two vaporizers (a device other than a container that receives LP-Gas [Liquefied Petroleum-Gas] in liquid form and adds sufficient heat to convert the liquid to a gaseous state), breaking one pipe off completely. As the liquid propane spewed from the pipe the operator of the 4-wheel, off-road vehicle drove away to call 911. The propane vapors, which have a vapor density of 1.53 and are thus 1½ times heavier than air, spread along the ground and were eventually ignited by the pilot flame at the vaporizers. Burning propane vapors spread throughout the area and began to impinge on the tank, causing the pressure relief valve to activate and send burning propane flames high into the air.

Upon arrival at the fire scene an assessment by the Chief was made of the burning tank. Fire had engulfed the propane tank and it was venting burning propane vapors via two pressure relief vent pipes located on top of the tank. Also, an extremely loud noise similar to a jet engine was being emitted by the tank’s pressure relief vent pipes. The tank was manufactured in 1964 and the tank’s shell was constructed of 3/4-inch carbon steel. The tank was 42 feet, 2 inches long, with an inside diameter of 106 inches and an 18,000 – gallon capacity, and it rested on two concrete supports/saddles. The tank was cylindrical and contained about 10,000 gallons of liquid propane. The tank had been fitted with two internal spring-type pressure relief valves which would vent to the atmosphere via two 2-inch-diameter pressure relief vent pipes when the internal tank pressure reached a set limit. The tank also had a fixed metal piping system between the tank and two vaporizers located on the ground about 35 feet away. The piping was 3/4-inches in diameter, positioned about 36 inches above the ground, was unprotected and had not been fitted with an excess flow valve.

After seeing the flames and hearing the high-pitched shrill being emitted by pressure relief vent pipes located on the top west section of the tank, a decision was made to allow the tank to burn itself out and to try to save the adjacent buildings by watering them down. The fire fighters positioned themselves in various areas in a semicircle north, northeast and northwest of the tank (see Figure). The two victims, whose location was about 105 feet away from the tank and on the northwest side of a building used to house turkeys, began to water down the building. At 2328 a Boiling Liquid Expanding Vapor Explosion (BLEVE) occurred. The BLEVE ripped the tank into four parts, each flying in a different direction. One part of the tank traveled in a northwest direction toward the two victims, striking them and killing them instantly. Six other fire fighters and a deputy sheriff received varying degrees of burns and assorted injuries.

The cause of death was listed by the medical examiner as massive trauma to all systems.

Discussion: Information contained in the North American Emergency Response Guidebook (NAERG),1 the National Propane Gas Association (NPGA),4 the International Fire Service Training Association (IFSTA),5 and the National Fire Protection Association (NFPA),6 contain guidelines for controlling Fire Involving Tanks, LP-Gas Fire Control, Suppressing Class “B” Fires, and Recommended Practice for Responding to Hazardous Materials Incidents, respectively. As these guidelines are comprehensive and expansive, they are not reflected here in their entirety. An example of the NAERG guidelines for controlling fire involving propane tanks include, but are not limited to the following: (1) fight fire from maximum distance or use unmanned hose holders or monitor nozzles, (2) cool containers with flooding quantities of water until well after fire is out, (3) do not direct water at source of leak or safety devices; icing may occur, (4) withdraw immediately in case of rising sound from venting safety devices or discoloration of tank, (5) always stay away from the ends of tanks, and (6) for massive fire, use unmanned hose holders or monitor nozzles; if this is impossible, withdraw from area and let fire burn. For additional information see REFERENCE section at the end of this report.

Recommendation # 3: All fire fighters should be educated to the many dangers associated with a BLEVE.

Discussion: Dangers associated with a BLEVE include, but are not limited to the following: (1) the fire ball can engulf and burn fire fighters operating near a burning tank when a BLEVE occurs, (2) metal parts of the tank can travel hundreds of feet and strike and critically injure fire fighters after a BLEVE, (3) a trail of burning liquid propane can douse and burn fire fighters, and (4) the shock wave, air blast, or flying metal tank parts created by a BLEVE can collapse buildings onto fire fighters or blow fire fighters out of windows or off roofs.3

Additionally, owners and users of propane tanks should:

Recommendation #4: Ensure that aboveground external piping is protected against physical damage via fencing or some other means of protection.

Discussion: Unprotected aboveground piping is subject to damage from a variety of sources (e.g., machinery, vehicles, people, animals, etc.). NFPA 58 (Standard for Storage and Handling of Liquefied Petroleum Gases) 3-2.8.77 states “Aboveground piping shall be supported and protected against physical damage.” Property or tank owners should ensure that bulk propane tank piping is protected against damage by fencing or some other means to prevent accidental contact and physical damage.

Discussion: NFPA 58 (Standard for Storage and Handling of Liquefied Petroleum Gases) 3-4.10(c)8 states “Excess-flow valves complying with 2-3.3.3(b) shall be installed in the container outlet supply line, downstream of each shutoff valve, and at any point in the piping system where the pipe size is reduced. An excess-flow valve is a device that can be installed into piping and is designed to close when the liquid or vapor passing through it exceeds a prescribed flow rate as determined by pressure drop. Also, an emergency shutoff valve is a shutoff valve installed in the piping system that incorporates thermal and manual means of closing that also provides for a remote means of closing. In this instance, an excess-flow valve or emergency shutoff valve may have prevented an excess of liquid propane from spilling, and thus, prevented the initial ignition of the propane. 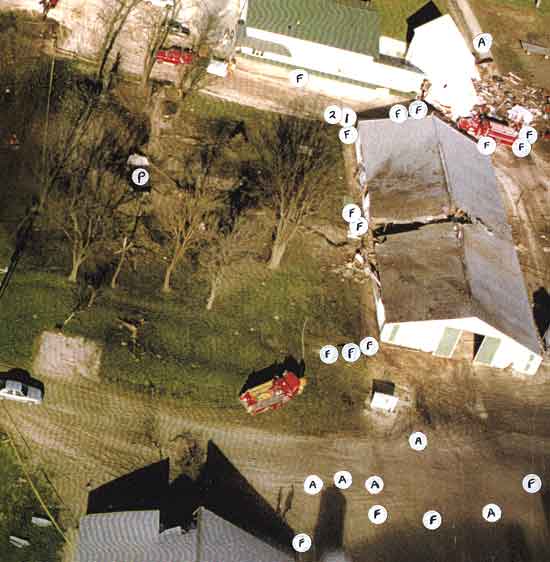 F — Position of other fire fighters

A — Position of apparatus.