On December 18, 1997, a 70-year-old male dairy farmer (the victim) died after being pinned between the bucket and frame of a skid steer loader (the loader). The victim and his son worked together throughout the morning of the incident, doing routine farm chores. At 11:15, the victim finished cleaning the barn with the loader. He drove the loader behind a machine shed in the farmyard to remove a part from an old manure spreader, using the loader bucket to lift an edge of the spreader. Apparently, the victim lowered the safety bars, exited the loader with the bucket in the raised position, then stood in front of the loader frame to operate the bucket control handle. The bucket came down and pinned the victim against the frame of the loader (See figures). After the victim’s son had completed the morning barn chores, he waited about 15 minutes for his father to return to the barn with the loader. He then went outside and followed the sound of the loader idling behind the shed. He saw the victim pinned by the bucket, and climbed into the cab to raise the bucket. The son ran to the house and yelled to his mother to call 911. He ran back to the incident scene, and positioned the victim on the ground. His mother arrived at the scene, followed by sheriff’s deputy and emergency responders within two minutes. The responders initiated CPR and continued until the ambulance arrived a few minutes later. The victim was transported to the hospital, where he was pronounced dead. The FACE investigator concluded that, to prevent similar occurrences, farmers and other skid steer loader operators should:

On December 18, 1997, a 70-year-old male dairy farmer died after being pinned between the bucket and frame of a skid steer loader. The Wisconsin FACE field investigator was notified by the Area OSHA office, on December 19, 1997. On March 3, 1998, the field investigator visited the farm and met with the victim’s wife and son. The FACE investigator also obtained the death certificate, the coroner’s and sheriff’s reports, and a newspaper description of the incident.

The farmer and his son primarily acquired farm safety information and training from equipment dealers, agricultural periodicals, radio and television programs, and from talking with other local farmers at community events. Although safety information was available at farm trade shows, the farmers’ attention was focused on the production aspects of the show. The farm office had books, brochures, videos, periodicals and equipment manuals containing farm safety information. The victim received specific information and training about safe skid steer loader operation from the equipment dealer when he purchased the equipment, eight years before the incident.

In over 50 years of farming, the victim had incurred injuries that resulted in time off from work, including falls, lacerations and cumulative trauma to his knees and ankles. About one year before the incident, the victim had reconstructive knee surgery, followed by ankle surgery three months later. He was able to resume daily farming activities within weeks of each surgery, and had modified his activities to adjust to decreased flexibility.

The dairy farm property included a farmyard with dairy barn, silos, and feed and equipment storage buildings, with 320 acres of crop fields surrounding the farmyard and farmhouse. The victim began working as a farmer after he purchased the farm about 52 years ago.

The farmer bought the Case Uni Loader skid steer loader new from an equipment dealer eight years before the incident. It was equipped with a seatbelt, and an interlock system which required two restraint bars to be brought down over the seat area and the engine running before the hydraulic lift system would operate the bucket. The farmer selected this model in part because the interlock system did not require the operator to sit on the seat for the hydraulic system to work. Although the victim occasionally reported discomfort in his knee and ankle, he could enter and exit the loader without assistance. At the time of the incident, the victim was wearing a brace on his right knee. His son reported the victim usually wore the seatbelt when operating the loader.

On the day of the incident, the victim and his son completed most of their usual morning farm chores by 11:15. The victim had been using the skidsteer to clean the barn, while the son spread fresh bedding in the cleaned areas. After cleaning the barn, the victim drove the loader behind a machine shed in the farmyard and was using the bucket to lift an edge of an old manure spreader. The event was unwitnessed, but it appears that the victim started the loader after lowering the seat bars, then exited the loader with the bucket in the raised position. He stood in front of the skidsteer frame on the right side to operate the control handle. The bucket came down and pinned the victim against the frame of the loader (See figures). Meanwhile, the victim’s son completed the morning barn chores and waited about 15 minutes for his father to return to the barn. When the victim did not return to the barn soon after the last trip with the loader, his son stepped outside to find him. He heard the loader motor idling, and followed the sound around the back of the machine shed. He saw the victim pinned by the bucket, and climbed into the cab to raise the bucket. The son ran to the house and yelled to his mother to call 911. After running back to the incident scene, he positioned the victim on the ground. His mother arrived at the scene, followed by sheriff’s deputy and emergency responders within two minutes. The responders initiated CPR and continued until the ambulance arrived a few minutes later. The victim was transported to the hospital, where he was pronounced dead.

After the incident, the hydraulic lift arm system was checked and found to be in good working condition.

The coroner’s report listed the cause of death as traumatic asphyxia.

Recommendation #1: Farmers and other skid steer loader operators should remain in the operator’s cab while operating the loader.

Discussion: Skid steer loaders are designed and manufactured to be operated from the operator’s cab. Safety devices, such as safety bars, seat belts, metal cage sides and rollover protection structures (ROPS) are all intended to protect the operator from injury while seated in the cab. In this case, the victim exited the cab and operated the hydraulic arm controls from outside. The bucket came down and pinned the victim against the frame. The incident would have been prevented if he had remained in the loader cab.

Recommendation #2: Farmers and other skid steer loader operators should operate the loader with the seat belt fastened and restraint bars down in place.

Discussion: Seat belts and interlocked restraint bars are intended to protect skid steer loader operators from serious injury caused by jolts, overturns and being pinned by the equipment. The victim in this incident defeated the restraint bar system by exiting the cab after the restraint bars had been lowered, allowing the hydraulic arm controls to be operated. When the machine was purchased eight years before the incident, loaders were available with seat sensor systems that locked the lift arm and tilt functions when the operator left the seat. Correct use of a seat belt, restraint bars, and a safety interlock seat sensor system would have prevented this incident.

Recommendation #3: Farmers and farm workers with functional limitations caused by illness or injury should seek and use the services of organizations and agencies that provide technical assistance and/or adaptive equipment to agricultural workers with disabling conditions.

Discussion: Farm machinery, including skid steer loaders, is designed and manufactured for use by individuals with full functional capacity. Physically disabling conditions, such as illness or injury, can impair a farm worker’s ability to operate a machine safely when carrying out his or her work duties. Technical assistance in designing and fitting adaptive equipment is available from agricultural safety specialists, including agricultural engineers, state vocational rehabilitation counselors, agricultural equipment and supply manufacturers, and Extension programs that serve people with physical disabilities. This incident might have been prevented if the skid steer loader had been adapted to permit easier and more comfortable entry and exit of the operator’s cab.

Discussion: Farmers incorporate new methods and machines, such as skid steer loaders, into their work sites to reduce manual labor effort and increase production. Reliable farm safety information is available from expert resources, such as extension agents, university agricultural engineering departments, farm insurance agents, and occupational safety research groups to assist farmers in safely adapting the new technology to their unique needs. The information must be repeated and offered through multiple channels to reach the full intended audience. The reports of farm safety focus groups reveal farmers’ interest in the details of injury-causing incidents in their state, as well as timely information about preventing similar incidents on their farm. They are more likely to heed the information if a financial incentive is also attached. Information from a variety of sources must give a consistent message. 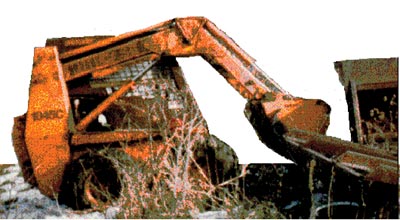 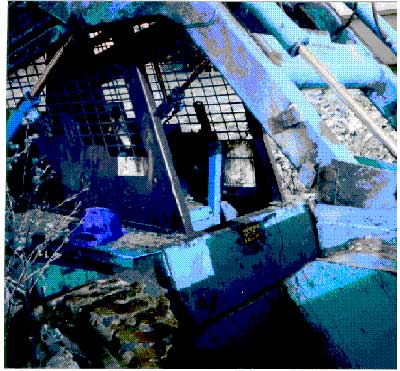 Staff members of the FACE Project of the Wisconsin Division of Health, Bureau of Public Health, do FACE investigations when a work-related fatal fall or machine-related death is reported. The goal of these investigations is to prevent fatal work injuries in the future by studying: the working environment, the worker, the task the worker was performing, the tools the worker was using, the energy exchange resulting in fatal injury and the role of management in controlling how these factors interact.