A 30-year-old construction crew chief for a sign installation crew died after falling 30 feet from a billboard catwalk that was not equipped with standard guardrails. The victim and three co-workers were installing a new vinyl sign cover on an existing billboard. The crew was on the upper catwalk approximately 30 feet high, preparing to unfold the new vinyl sign down the front of the south side of the billboard. A gust of wind caught the vinyl sign as it was unfolded and threw it back onto the crew. The crew members were wearing harnesses with lanyards, but only one crew member was tied off. He had tied off to the billboard structural members. The victim was not tied off and the vinyl sign knocked him off balance. He fell from the catwalk into the billboard metal structure and onto the ground below.

On February 5, 1999, a 30-year old male construction crew chief died of injuries received when he fell 30 feet from a billboard platform into the billboard metal structure and onto the ground. On February 8, 1999, the FACE investigator visited the incident site and met with the Operations Manager of the employer. The FACE investigator also obtained the OSHA citations, the death certificate, and the medical examiner report.

The employer was an outdoor advertising company which had been in business for 19 years, and currently employed 27 workers. At the time of the incident, two of the four workers at the site were crew chiefs and they were responsible for safety at the worksite. The employer had a written safety and health program and safety policies that addressed the fall hazard and had a safety manual specific to outdoor advertising. The fall protection policy was not enforced. Employees were required to sign a written statement that they had read and understood the manual. The victim was 30 years old, had worked for the company for six years, and had been a chief for 14 months. This was the company’s first fatality.

At 1:30 p.m. on February 5, 1999, four employees were installing a new vinyl sign cover on a large billboard. The metal billboard was 14 feet tall by 48 feet wide; it was approximately 30 feet high at the top, and was facing south directly into the wind. The workers were working from an unguarded catwalk located inside and at the top of the billboard. The catwalk was 12 inches wide and ran the entire length of the billboard. The 4-man crew was on the 30-foot high catwalk unfolding the new vinyl sign in windy conditions; the vinyl sign reportedly weighed over 100 pounds. The crew members were wearing harnesses with lanyards but no lifeline component (horizontal cable) had been installed to which they could connect their lanyards. One crewman tied off to the billboard structure. After the crew rolled out the vinyl sign, they ran a pipe through it, and then strapped the sign to the catwalk. While standing on the catwalk, they began to throw the vinyl sign over the south face of the billboard. A strong gust of wind caught the sign as it unfolded, throwing it back on the men. The winds that day averaged 15.7 mph, with gusts to 32.1 mph from the south. When the wind struck the vinyl sign, the victim, who was not tied off, was thrown off balance and fell 30 feet to the ground, striking the billboard metal structure during the fall. The other workers did not fall. One of them was tied off and the other two were able to cling to the billboard structure. The victim’s co-workers called 911 and the police and emergency medical services (EMS) arrived at the site within five minutes. EMS personnel pronounced the victim dead at the scene.

Reportedly, at least one similar incident of a sign blowing back on the workers had occurred in the past, but no one had fallen previously. Earlier that day, the crew had installed two signs without incident in locations where the wind was not blowing directly at the sign.

The medical examiner listed multiple injuries as the cause of death.

Recommendation #1: Employers should ensure that all exposed sides of catwalks/platforms are guarded by standard railings with toeboards.

Discussion: At the time of the incident, the crew was installing a vinyl sign on an existing billboard structure. The workers were working from an unguarded catwalk located inside and at the top of the billboard. The upper catwalk was 30 feet high and 12 inches wide. The catwalk should have been guarded by a standard railing 42 inches high with toeboards on all sides (except at the entrance to the opening) with the passage through the railing either provided with a swinging gate or other safety system.

Discussion: Employer policy written in the safety manual was to use a personal fall arrest system (harness, lanyard, and anchor point). Some signs had horizontal cables to use as lifelines (anchor points) for personal fall arrest systems and some did not. The employer needs to provide these horizontal cables on all of their signs and then reinforce with their workers the need to tie off to them every time they are working at elevations. Although the company provided special hooks as an alternative anchor point with which to tie off to the structure, three of the four crew members were not using them at the time of the incident.

Recommendation #3: Employers should implement routine inspections of the worksite to identify and correct potential hazards.

Discussion: The victim was knocked off balance when the wind blew against the vinyl sign, causing the sign to strike the victim. Proper use of fall protection and fall arrest equipment as stipulated in the employer’s safety manual may have prevented or arrested the fall. Regular inspections of the work site and observation of work habits can provide incentives for workers to follow established safe work procedures. Disciplinary action should be used when employees do not follow the company’s safety policies and procedures. Such inspections also provide safety managers with opportunities to detect unsafe procedures and conditions such as misuse or nonuse of fall protection systems or the lack of proper anchor points. High gusting winds increased the fall hazard and had this safety concern been recognized, workers may have been instructed to postpone the work until conditions improved. 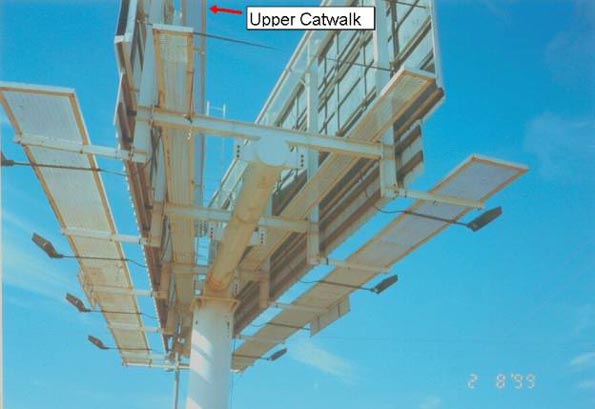