Farmer Died When He Was Crushed Within a Hay Baler

A 73-year old farmer died on May 2, 2001 from injuries received when he was crushed within a hay baler. OKFACE investigators concluded that to prevent similar occurrences, employers should:

A 73-year old farmer died on May 2, 2001 from injuries received when he was crushed within a hay baler. The decedent had been a farmer/rancher for many years. OKFACE investigators reviewed the death certificate, medical examiner’s report, and newspaper articles on the incident. OKFACE investigators also interviewed three responding police officers, a police detective, and two subject matter experts on the implement involved in the incident.

At the time of the incident, the victim had been operating a farm tractor that was pulling a hay baler. The hay baler, manufactured no later than 1982, was unavailable to OKFACE investigators for inspection. OKFACE investigators identified no objective evidence that the farm operation had a formal safety program.

The temperature at the time of the incident was approximately 70-75°F, and the wind was out of the north-northeast at an average speed of 20 mph with gusts up to 36 mph. There had not been any measurable precipitation for at least 10 days. The decedent was operating a tractor (similar to the one shown in Figure 1), to which was connected a large round hay baler (similar to the one shown in Figure 2). His plan was to bale hay that had been cut on a 25-acre alfalfa field located along a state highway approximately two miles north of a nearby city. The hay baler was equipped with hydraulic cylinders, which were connected to the tractor’s hydraulic system. These hydraulic cylinders operated the rear gate and the bale tying mechanism. The farmer was a widower and operated the farm by himself. His last contact with a family member occurred two days before he was found dead.

On the day of the incident, a passerby sighted the tractor and baler in the field. He noted that the equipment had not moved since an earlier sighting and contacted the decedent’s daughter, who went to the scene. Upon discovering the decedent’s body, his daughter signaled a passing police officer who summoned emergency responders by radio. Fire department personnel responded quickly and extricated the decedent from the baler. The Medical Examiner arrived less than two hours afterward and pronounced the victim dead at the scene. It was estimated that the farmer had become entrapped in the baler earlier in the day and may have been dead for five hours or longer before being discovered at approximately 3:30 p.m.

There were no eyewitnesses to the incident. Physical evidence indicated the victim had begun baling the hay that morning and had completed six bales before experiencing an undetermined difficulty. He ejected a seventh partial bale and climbed down from the tractor, leaving the vehicle’s motor running, the power take-off (PTO) engaged, and the hydraulically operated rear gate in the open or “up” position. He then walked to the back of the baler (similar to the one shown in Figure 3) and was standing beneath the elevated gate when apparently the gate suddenly descended, crushing him between the belt rollers (which are connected to the gate on each end by stabilizer bars) and the floor of the baler. The tractor ran out of fuel and was not running at the time the farmer’s body was discovered. The key was found in the “on” position, and the PTO control was engaged. One of the large flat belts on the baler had been cut by a sharp object and was partially lying on the ground beneath the baler. 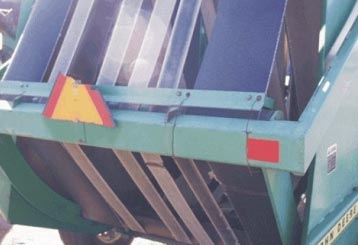 The Medical Examiner listed the immediate cause of death as multiple trauma.

Discussion: Failure to observe warnings and follow safe work procedures recommended by the equipment manufacturer was the underlying cause of the fatal incident. Evidence at the scene indicated the decedent engaged the tractor’s hydraulic system to open the hay baler’s rear gate then approached the back of the machine without first setting a manual support bar (Figure 4) in place. The support bar is designed to hinge down onto the extended hydraulic cylinder to prevent compression of the cylinder and closure of the gate. By failing to set the support bar, the operator relied on the tractor and implement hydraulic systems to hold the heavy gate open. Use of the support bar may have prevented the fatal incident. 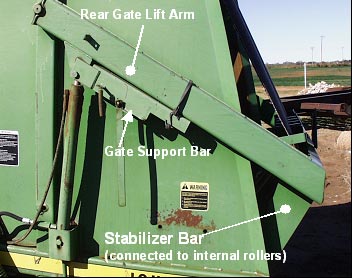 Figure 4. Side view of the rear gate lift arm

A factory-installed decal on the hay baler clearly relates the hazard presented by moving parts and instructs the operator to “disengage PTO and shut off engine” to avoid being pulled into the machine. With the tractor turned off and the PTO disconnected, the operator would have had to use the support bar to keep the baler’s rear gate open while he was in the hazard area. Failure to follow the warnings and reliance on the operating hydraulic systems to hold the gate exposed the operator to the hazard of moving parts.

Recommendation #2: Employers should familiarize themselves and their employees with farm safety documents and training materials.

Discussion: Small family farms frequently have no formal safety program or written safety procedures. The information to promote farm safety and health is available from many sources and in a variety of media. Safety training is a critical component of an effective farm safety program, whether or not the program has been formally developed, and the farm owner must ensure that all workers, including family members and part-time or occasional employees, participate in quality safety training that promotes safe job performance on the farm. Manufacturers produce operating manuals for equipment such as the tractor and hay baler involved in this incident. These manuals are critical sources of safety information on the operation of such equipment and should be read and then kept where they are available for future reference.

Additional resources for documents and training videos include:

The Oklahoma Fatality Assessment and Control Evaluation (OKFACE) is an occupational fatality surveillance project to determine the epidemiology of all fatal work-related injuries and identify and recommend prevention strategies. FACE is a research program of the National Institute for Occupational Safety and Health (NIOSH), Division of Safety Research.

These fatality investigations serve to prevent fatal work-related injuries in the future by studying the work environment, the worker, the task the worker was performing, the tools the worker was using, the energy exchange resulting in injury, and the role of management in controlling how these factors interact.