A 51-year old farm worker died on March 9, 2001 from injuries received when he was run over by the farm tractor he was operating. FACE investigators concluded that to prevent similar occurrences, employers should: 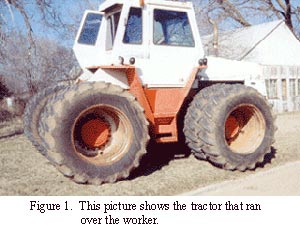 A 51-year old farm worker died on March 9, 2001 from injuries received when he was run over by the tractor he was operating. The deceased had worked on a farm owned by his son for approximately five years. FACE investigators reviewed the death certificate, the medical examiner’s report, and newspaper articles on the incident. While conducting the site survey on July 30, 2001, investigators interviewed two witnesses and two officers with the county sheriff’s department who responded to the incident. FACE investigators also interviewed three experts on the type of tractor involved in the incident.

The worker who died in the incident was the only employee of the family farm owned by his son. He was a welder and performed a variety of tasks other than operating farm equipment. At the time of the incident the victim had been operating, and was subsequently run over by, a Case-IH model 2470 four-wheel drive farm tractor. The tractor, manufactured in the late 1970s, was in need of some repairs but was generally in good operating condition at the time. FACE investigators identified no objective evidence that the farm operation had a formal safety program.

The temperature at the time of the incident was approximately 53° F, the average wind speed was 8 mph, and there had been no precipitation. The deceased was reportedly preparing a Case-IH model 2470 four-wheel drive tractor (Figure 1) for spring crop activities and, in doing so, drove the tractor to a service station in a small community nearby. The service station was located on the north side of a state highway in a rural town. The station had fuel pumps on the west side and the south side of the store. The deceased arrived at the station at approximately 3:00 in the afternoon and positioned the tractor near the west pumps (Figure 2). He filled the tank with diesel, and then drove the tractor around to the pumps at the front of the station to check and adjust the tire pressure in each of the four sets of dual wheels. The worker did not shut off the tractor motor at any time while he was at the station. While the driver was checking the tire pressure, the service station manager went to the south side of the pumps and positioned himself between the pumps and the tractor to record the pump readings.

After checking and adjusting the tire pressure, the driver climbed into the cab and started to drive the tractor away from the station. With the transmission shifted to a high gear, the tractor died when the driver released the clutch. Because a key had previously been broken off in the ignition switch and the switch had not been repaired, the driver used a jump-start method to start the tractor. He climbed down out of the cab without first ensuring that the transmission was shifted into neutral and walked around in front of the tractor. He used a screwdriver to create an electrical short between the tractor’s battery and starter, an operation that required the worker to position himself directly in front of the inner right front wheel while reaching into the engine compartment (Figure 3). The motor fired immediately when the screwdriver shorted the starter to the battery. 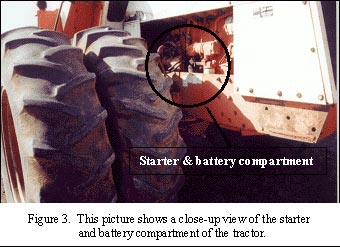 After a delay of approximately one second during which the vehicle’s hydraulic pressure increased to operating level, the tractor lurched forward, running over the driver and proceeding in an easterly direction away from the fuel pumps. The sudden movement of the tractor knocked down the service station manager, who had been leaning against one of the tractor tires while he was recording the pump readings. A service station attendant saw the tractor veering toward the highway and fearing that the vehicle would enter the roadway, ran after the tractor. While the tractor was still moving, he jumped onto the vehicle, climbed into the cab, and popped the clutch to shut down the motor just before it reached the roadway. The tractor came to rest approximately 100 feet from the fuel pumps where it had been started.

Local volunteer emergency responders arrived at the scene within six minutes, but the driver could not be revived. The County Undersheriff arrived about fifteen minutes after the incident occurred, and the Deputy Sheriff arrived five minutes later. The body was removed at approximately 4:05 p.m., about thirty-five minutes after the incident, and transported to a funeral home in a nearby town where it was viewed by the Medical Examiner.

The Medical Examiner listed the immediate cause of death as multiple head and trunk injuries.

Recommendation #1: Employers should maintain tractors and similar farm equipment in safe operating condition, including any original safety-related features and any retrofits designed and recommended by equipment manufacturers.

Discussion: Although the tractor was generally in good condition, FACE investigators identified two significant equipment hazards, the correction of either one of which may have prevented the incident. First, a key had been broken off in the starter switch, requiring the operator to use an alternative method to start the tractor. Replacement of the switch would have allowed the operator to start the tractor from within the cab. Second, by jump-starting the tractor, the operator by-passed the transmission/ignition interlock, a manufacturer-designed safety feature that required the transmission to be in neutral for the ignition switch to engage the motor. The manufacturer had designed a shroud to cover the components, thereby discouraging the practice. This retrofit was available but had either been removed or was never installed on the tractor involved in this incident.

Recommendation #2: Employers should familiarize themselves and their employees with farm safety documents and training and follow safe operating procedures in the operation of tractors and other farm equipment.

Discussion: Small family farms may not have a formal safety program or written safety procedures; however, the information to promote farm safety and health is available from many sources and in a variety of media. Safety training is a critical component of an effective farm safety program, whether or not the program has been formally developed, and the farm owner must ensure that all workers, including family members and part-time or occasional employees, participate in quality safety training that promotes safe job performance on the farm. Manufacturers and operating manuals for equipment such as the Case-IH tractor involved in this incident are critical sources of safety information on the operation of such equipment. Employers should maintain equipment manuals and manufacturer safety information for future reference. Additional resources for documents and training videos include the following:

Recommendation #3: Employers should periodically monitor and evaluate employee conformance with safe operating procedures and provide re-training and corrective action as necessary when the procedures are not followed.

Discussion: The victim in this incident had reportedly worked for the family farm operation for approximately five years and had operated the tractor on numerous occasions prior to the date of the incident. However, the victim did not follow safe operating procedures, particularly those recommended by the manufacturer, at the time of the incident. FACE investigators identified no objective evidence that employee conformance with safety work procedures was reviewed at any time prior to the incident. Regulations that apply to similar equipment but do not apply to family farm operations require employers to conduct refresher training on equipment operation, including an evaluation of the training’s effectiveness, whenever a performance deficiency is identified, an incident or near-miss incident occurs, or workplace conditions change. These requirements also mandate a performance evaluation at least once every three years. Although the requirements do not specifically apply to this particular situation, their importance to the reduction of risk is apparent; therefore, conformance with such requirements would be a reasonable objective for operators of family farms.