On October 15th, 2002, a 28-year-old farm employee was involved in a fatal tractor-trailer rollover. The employee was using a tractor-trailer to transport liquid manure from an on-farm manure storage pit to a field location for spreading when the incident occurred. At the time of the incident, the victim was still on the roadway between the farm and field location and was attempting to make a 90 degree turn in the road when the tractor-trailer rolled over, coming to rest on the driver’s side. The victim was trapped partially in the cab of the manure truck, and as the window had been open, the victim’s head was outside and underneath the door of the truck. The owner of the farm was at the accident location, and immediately called for help. The emergency squad arrived within eight minutes; the victim was pronounced dead at the scene by the coroner.

A referral call from a dairy farm producers trade organization notified a New York FACE investigator of an agricultural related fatality. The incident involved a 28-year-old, Caucasian male dairy farm employee who was transporting liquid manure from the farm to a field location utilizing a tractor-trailer manure spreader.

The victim had worked at this farm for approximately one year and had considerable experience operating this particular tractor-trailer. The dairy farm milks approximately 500 cows and tills approximately 1,100 acres of cropland. In addition to the owner and his wife, who both work fulltime on the farm, they employ six full-time employees. Four of the employees work in the barn with the dairy herd, while the other two employees work mainly with the field crop production and machinery. The family-owned farm has been in the family for five generations at this location.

A site visit was made to the farm location on January 15th, 2003 by a NY FACE investigator. The incident site was inspected along with the equipment involved in the overturn. NY FACE staff also reviewed news media reports, the police report, and the death certificate.

On October 15th, 2002, the 28-year-old farm worker was transporting liquid manure from the on-farm manure storage pit to the crop fields utilizing a tractor-trailer manure spreader. The tractor-trailer was a 1995 Freightliner FLD120 tractor pulling a 1979 liquid bulk tank. The Freightliner was a conventional cab without a sleeper, and the 9,000-gallon trailer tank had been previously used as a liquid fuel transport tank. The tank trailer had been modified in the back with the addition of a liquid manure spreader-type system, which broadcast the liquid manure from inside the tank onto the field as it was operated across open land areas.

On this day, at approximately 3:35 PM, the employee was taking his seventh load of manure out from the farm to spread in the field location. He had traveled approximately one-quarter mile down the dirt road by the farm and was at a 90-degree bend in the road requiring a left-hand turn (Photo 1). As the employee approached the turn, the farm owner was travelling toward the same turn in an on-coming pick-up truck. The tractor-trailer driver swung wide to the right-hand side as he made the left-hand turn. The farm owner stated that as he passed the tractor-trailer he looked back in his rearview mirror and noted that the side tractor-trailer wheels began to come up and the tractor-trailer subsequently overturned. The tractor-trailer had overturned off the right-hand side of the road, making a 270-degree rollover and coming to rest on the driver’s side (Photo 2). 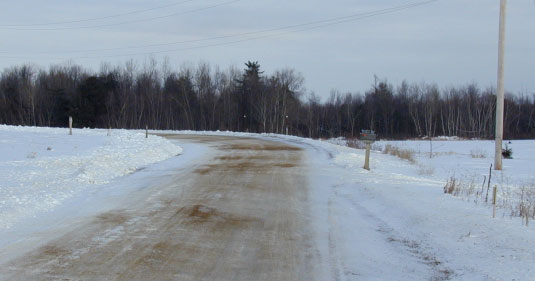 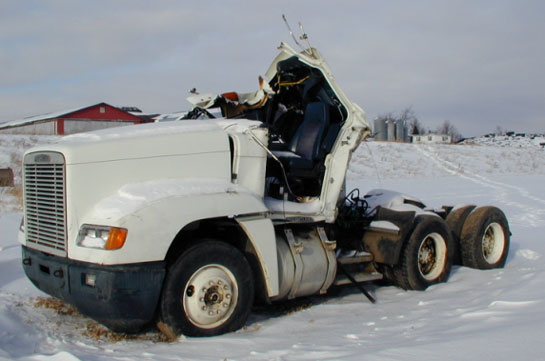 The farm owner immediately went to the scene, simultaneously calling 911 on his cell phone activating the local emergency system. The farm owner then got on his handheld two-way radio and called the employees at the farm and told them to bring two tractors and equipment to help with the righting of the tractor-trailer. Meanwhile the farmer could see that the driver was trapped in the cab of the manure truck, and that the driver’s side window had been open; it appeared that the driver’s head was outside and underneath the door of the truck. The driver’s body was upside down with his feet sticking up in the air since the cab was on its side. The driver yelled to the farm owner to help him get out of the vehicle, and the farmer told him that he had help on the way and he would have him out shortly.

The follow-up autopsy ruled that the driver had died from positional asphyxiation, which would indicate that while he was trapped in this position it was not a crushing injury that caused his death but rather the restriction from normal breathing.

In reconstructing the incident, it was discovered that the standard practice on this farm was to not fill the tractor-trailer entirely full of manure. The tractor-trailer was routinely filled approximately 2/3 to 3/4 full, due to the concern of having too much weight in the tank for effective spreading of the manure. On the day of the incident, the victim did not fill the tank entirely, however the exact amount the tank contained on this particular load is unknown. It was learned that the driver had completed six loads of transport and spreading and was hurrying to complete his seventh load since the forecast of cold weather for the next day was less advantageous for performing this kind of work. The worker wanted to spread as much manure as possible thereby lowering the amount of manure that would be in the manure storage tank on the farm for the wintertime. Often in inclement weather, farms are unable to spread manure and have to build up the manure storage until the mid-winter or spring when they can again get into their fields for distribution. Two days prior to the incident the farm had just finished chopping haylage for the year and had covered the bunker silo on the morning of the incident.

It is believed that as the employee drove the tractor-trailer down the narrow two-lane dirt road, his normal custom was to cut across the lane and stay on the left-hand side of the turn as he proceeded through this 90-degree turn. At the time of the incident, since another vehicle was coming toward him, he needed to stay on the right side. He was travelling an estimated 30 MPH at the time of the incident and as he entered the turn, the tractor went around the turn and the rear end of the trailer tank swung out to the right and off of the roadway. As it left the normal track of the roadway it caused the tank to begin to roll over, affecting the tractor and rolling the entire tractor-trailer unit over, coming to rest on the driver’s side, after completing 270 degrees of roll.

On the embankment, the road sloped down at approximately 30-degrees, with loose gravel in this portion. It is believed that as the right side trailer tank wheels began going down over this gravel area that it caused the liquid manure to shift, helping to create the rollover due to added momentum provided by the load shifting within the tank. This particular 9,000-gallon tank was divided into five separate sections with internal baffles separating the tank front to back. The internal baffles had an approximate 12-inch diameter hole cut in the bottom of each one to allow the liquid to travel from the front section back through the midsections to the rear section where it would be discharged through the spreading system. The baffles provided protection against liquid sloshing forward and backward and divided the load into five equal segments within the tank. They did not, however, prevent side-to-side movement of the liquid within those cells.

On the day of the incident the State Police responded to the scene with a tractor-trailer incident reconstruction team. The team reconstructed the path and dynamics of the vehicle in relation to the roadway. They also thoroughly inspected both the tractor and the trailer and found them both to be in proper working/safety condition. The State Police listed the main cause of this incident to be driver inexperience.

The cause of death was listed on the death certificate as positional asphyxiation.

Recommendation #1: Tractor-trailers should be driven at operating speeds appropriate for roadway conditions.

Discussion: In this scenario, the tractor-trailer was traveling at an excessive rate of speed for the given road conditions. Since the road was a small two-lane dirt road with an acute 90 degree left hand turn, the tractor-trailer was traveling at too great a speed to safely negotiate the left-hand turn. The only route that would allow the vehicle to successfully make the left-hand turn at that speed was by crossing over into the on-coming lane during the turn. Since a vehicle was approaching in the on-coming lane the tractor-trailer had to remain in its own lane during the turn.

Recommendation #2: Liquid trailer tanks should be filled to capacity to ensure safe transport given the nature of the internal material and the road conditions.

Discussion: In this scenario the 9,000 gallon trailer had been partially filled with between 6,000-7,000 gallons of liquid manure. This represents between 40,000-50,000 pounds of material. This tank contained baffles that divided the tank from front to back. These prevented forward to back movement of the manure but did not prevent sideways movement of the manure. Since the tank was only partially filled, and due to the type of baffles, the liquid was allowed to shift to the side during the turn. This caused the center of gravity to shift to the right adding to the right-hand side momentum of the vehicle during the turn.

Discussion: In addition to the CDL, drivers operating liquid trailer tanks require additional training and certification. In this incident, the victim did not have either a CDL or the additional training related to the liquid tank. The employer believed that the driver did have the necessary training and licensing. Driver inexperience may have contributed to poor judgment during roadway travel. The required training associated with the CDL may have provided additional knowledge to the operator regarding safe driving practices.

Recommendation #4: Employees should provide a copy of their CDL to their employer that can be retained in personnel records.

Discussion: In this instance, the employer initially hired the victim with the understanding that he possessed a valid CDL. Employers should make a practice of copying and retaining the employee’s CDL and other certifications in the employee personnel file. This would ensure that licensing information is available in the event of incident.

The Fatality Assessment and Control (FACE) program is one of many workplace health and safety programs administered by the New York State Department of Health (NYS DOH). It is a research program designed to identify and study fatal occupational injuries. Under a cooperative agreement with the National Institute for Occupational Safety and Health (NIOSH), the NYS DOH FACE program collects information on occupational fatalities in New York State (excluding New York City) and targets specific types of fatalities for evaluation. NYS FACE investigators evaluate information from multiple sources. Findings are summarized in narrative reports that include recommendations for preventing similar events in the future. These recommendations are distributed to employers, workers, and other organizations interested in promoting workplace safety. The FACE program does not determine fault or legal liability associated with a fatal incident. Names of employers, victims and/or witnesses are not included in written investigative reports or other databases to protect the confidentiality of those who voluntarily participate in the program.