On August 31st, 2002, an 84-year-old part-time farmer died as a result of being run over by a brush hog being pulled behind a tractor. The farmer had been mowing a sloped field of hay at the time of the incident. As he was mowing down the slope he fell forward and off of the tractor. Although the tractor did not hit him, the attached brush hog ran over him, dragging him in the process. The tractor and brush hog then continued down the slope, and stopped upon running into a pick-up truck parked in the farmyard. A neighbor later noticed the tractor and went to see what had happened. Upon discovering the farmer, the neighbor returned home to have his wife call 911. The emergency squad and sheriff’s department responded to the scene within approximately 10 minutes. Upon inspection, the county sheriffs notified the coroner who responded to the scene and pronounced the victim dead at the location.

New York State Fatality Assessment and Control Evaluation (NY FACE) investigators concluded that to help prevent similar incidents from occurring in the future, farmers performing this type of work should:

The New York State FACE program learned of the agricultural-related fatality through news media reports. The article was sent to the FACE program by the New York Center for Agricultural Medicine and Health (NYCAMH). The fatality involved an 84-year-old Caucasian male part-time farmer who was cutting a hay field at the time of the incident. The victim was operating a brush hog behind a small utility tractor when he fell from the tractor and was inadvertently run over by the machinery.

A NY FACE investigator visited the farm location on February 12th, 2003. The investigator also met with the county sheriff’s department personnel who had responded to the scene on the day of the incident. Additionally, NY FACE staff reviewed the sheriff department’s incident report as well as the death certificate.

The elderly farmer had lived at this location his entire life. He had farmed part-time throughout his life in addition to having a fulltime job off of the farm during his pre-retirement years. The farmer had retired from his off-farm job 20 years prior to the incident and at the time of the incident only worked around his small farmstead. The farmer had sold off pieces of property and had approximately 50 acres remaining that he worked. The farmer lived by himself; his wife had passed away 2½ years prior. He had no relatives that lived in the area, and was entirely self-sufficient.

On August 31st, 2002, at approximately 3:00 PM, the elderly farmer was cutting grass in a field behind his residence. The field was approximately ten acres, rectangular, and had a 27-degree declining slope with the longer axis running up and down the slope. The victim’s house was located at the bottom end of the field near the roadway. The farmer was utilizing a 1945 Ford 8N tractor with a five-foot brush hog mower attached to three-point hitch arms. (Photo 1). The brush hog mower was PTO driven. Both the brush hog, which was newer and in excellent condition, and the tractor were well maintained and in good working condition. The tractor had tires that appeared new, and the general maintenance of the tractor looked to be excellent. The farmer was cutting the hay in the field with the brush hog, not intending to bale it, but simply wanting to cut it to a lower height so that the field would be able to winter over in better condition. The farmer was traveling up and down the slope of the field and had cut approximately half of the field at the time of the incident. 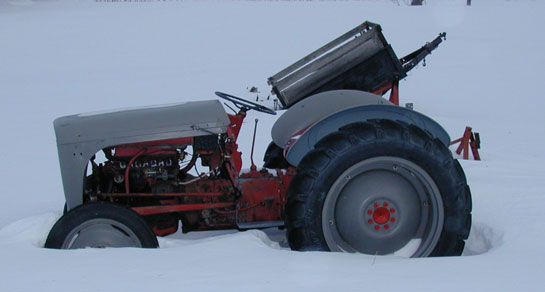 In reconstructing the incident, it is evident from both the areas that had been cut in the field and the path of the tractor, that the farmer had mowed up the slope parallel to his previous paths. He had then turned around at the top of the field and was traveling down the slope of the field when he fell forward and to the left side of the steering wheel. He fell just forward of the left side foot platform and his body traveled underneath the tractor without being run over by the left rear tire of the tractor. As the tractor and mower continued down the slope he was then struck by the 5-foot brush hog mower. Based on evidence at the scene and measurements taken by the county sheriff’s department, the victim was dragged for approximately 100 feet down the field before the brush hog mower traveled completely over his body and allowed him to come to rest in the field. The tractor and mower continued down the slope, eventually running into the back of a parked pick-up truck behind the farmer’s house.

Approximately a half-hour after the incident, a neighbor of the farmer noticed that the tractor was against the back of the pick-up truck. He went over to the farmer’s house and noticed the tractor running against the back of the truck. The tractor was in neutral at that time. The neighbor turned off the engine of the tractor and then looked for the farmer. He noticed something lying in the field and walked up the field until he was approximately halfway to the farmer. As he got closer he noticed that it was indeed the farmer, and that he had suffered severe and probably fatal injuries. The neighbor ran back to his own house and told his wife to call 911. The neighbor’s wife called and reported the incident. The emergency squad and sheriff’s department responded to the scene within approximately 10 minutes.

Upon inspection, the county sheriffs notified the coroner who responded to the scene and pronounced the victim dead at the location.

It should be noted that the week prior to the incident, the local ambulance had responded to the farmer’s location due to a fainting spell the farmer experienced while operating the same tractor. It is possible that on the day of the incident the elderly farmer had another fainting spell and was either trying to dismount from the tractor or simply fainted and fell forward during the fainting spell. The sheriff’s investigation team noted that a piece of the farmer’s left lower pant leg was caught on clutch pedal of the tractor. This would indicate that during the fall, the clutch pedal entangled itself in the lower pant cuff of the victim and tore the material away as he fell off of the tractor.

As bulky clothing and complicated controls can contribute to driver entanglement when operating machinery, it is important to note that on the day of the incident the weather was warm and sunny, and the victim was not wearing excessive clothing. He had a light shirt on and a pair of work pants, but did not have on any additional jackets or over pants. The farmer was also very familiar with this tractor, having operated it for many years; the controls of this tractor are relatively simple and it is not believed that the complexity of the controls of the tractor contributed to the event occurring.

The cause of death was listed on the death certificate as multiple traumatic sharp and blunt force injuries.

Recommendation #1: All farm tractors should be equipped with rollover protective structures (ROPS) and a seatbelt. [Note: Owners of older model tractors should contact their county extension agent, equipment dealer, or equipment manufacturer to determine if retrofit ROPS and operator restraint systems are available for their equipment. Such systems should be installed by the manufacturer or an authorized dealer.]

Discussion: Preventing death and serious injury to tractor operators during rollovers requires the use of ROPS and a seat belt. ROPS can either be a two-post, a four-post, or a design that is incorporated into an approved ROPS cab. The rollover protective structure is designed to protect the operator in the event of an overturn. A seatbelt is part of this ROPS system, which ensures that the operator remains in the zone of protection in the event of an overturn. OSHA regulations require that all tractors built after October 25, 1976 and used by employees of a farm that employs 11 or more must be equipped with ROPS and a seat belt. In New York, many older tractors (pre-1976) are in use on family farms and are used by the farm owner or used on farms that have less than 11 employees and therefore do not fall under OSHA regulations. Given the steep slopes and environmental conditions that deteriorate field roads in New York, all farmers should voluntarily have their older tractors retrofitted with a properly designed, manufactured, and installed ROPS and seat belt. If this tractor had a ROPS and seatbelt in place the farmer may have been restrained in the operator position on the seat, even if he was unconscious. This would have helped to prevent him from falling off of the tractor.

Discussion: Medical conditions that may cause fainting spells or blackouts can have serious consequences to operators of farm machinery. As one week prior to the incident, it is known that the farmer had experienced a fainting episode while operating this tractor, it is believed that the farmer may have had a blackout or spell of unconsciousness while operating the tractor on the day of the incident. This may have contributed to the farmer falling from the machinery and inadvertently being run-over by the attached brush hog.

Discussion: A worker’s ability to perform job tasks may be affected by individual conditions such as general health, reaction time, and/or flexibility. These conditions should be considered when assigning tasks that involve physical strengths or agility. While the victim enjoyed this kind of work and had done it for many years, the blackout incident during the prior week should have been an indicator to refrain from tractor operation until his medical condition could have been accurately diagnosed and treated.

The Fatality Assessment and Control (FACE) program is one of many workplace health and safety programs administered by the New York State Department of Health (NYS DOH). It is a research program designed to identify and study fatal occupational injuries. Under a cooperative agreement with the National Institute for Occupational Safety and Health (NIOSH), the NYS DOH FACE program collects information on occupational fatalities in New York State (excluding New York City) and targets specific types of fatalities for evaluation. NYS FACE investigators evaluate information from multiple sources. Findings are summarized in narrative reports that include recommendations for preventing similar events in the future. These recommendations are distributed to employers, workers, and other organizations interested in promoting workplace safety. The FACE program does not determine fault or legal liability associated with a fatal incident. Names of employers, victims and/or witnesses are not included in written investigative reports or other databases to protect the confidentiality of those who voluntarily participate in the program.