On Tuesday, April 16th, 2002, a 72-year-old part-time farmer died as a result of a tractor overturn. The victim had been brush-hogging the outer edge of a pasture when the tractor was driven onto an embankment that gave way, causing the tractor to roll over. The tractor rolled down the embankment, crushing the operator during the initial 180 degrees of rolling. His brother, who heard the crashing sound of the tractor rolling down the embankment, discovered the victim soon after and had someone call the emergency squad, which responded within minutes. The county coroner was called and pronounced the victim dead at the scene.

New York State Fatality Assessment and Control Evaluation (FACE) investigators concluded that to prevent similar incidents from occurring in the future, the following recommendations should be followed:

The New York State FACE program received notification of an agricultural related fatality through a newspaper article. This incident involved a 72-year-old male farm worker who was operating a tractor with a brush-hog attached to a three-point hitch. He was cutting a pasture near an embankment when the overturn occurred resulting in fatal injuries.

An investigation was conducted by a FACE investigator, who is an agricultural engineer. A site visit was conducted on Thursday, July 25th, 2002, with a visit to the location of the incident and additional discussion with the State Police investigators. Prior to the site visit, information was collected from media reports, visitation with the attending coroner and through reading the investigation reports of the New York State Police.

The victim had been involved in agricultural work his entire life, owning his own dairy farm the majority of his lifetime. After he sold his dairy farm, he continued to work part-time for neighboring farmers and for the past year had been employed as a part-time worker on a nearby small dairy farm.

On Tuesday, April 16th, 2002, the part-time farm worker was brush-hogging pastureland located a few miles from the main farm in an effort to keep the weeds down in this pasture area. On this particular day he was brush-hogging utilizing a 1970 Massey Ferguson 175 tractor with a six-foot woods brush-hog on the back to cut down the taller weeds on the outskirts of the pasture land.

At approximately 1:00 pm, the farm worker was brush-hogging up a side hill at the edge of the pasture and had made one pass up a farm lane to the top of the hill and returned to the bottom. He then turned around and was brush-hogging an adjacent six foot wide path next to the original pass. As he neared the top of the slope, he attempted to turn the tractor around in a loop configuration to return down the hill. As he turned to the right, the right side of his tractor came dangerously close to a thirty-five foot drop embankment that descended at a 75 degree angle (see Photo 1). This embankment had been created by erosion from the nearby stream that was located at the bottom of the embankment. Over time the stream had eroded the steep bank, resulting in the bank being cut back in towards the pasture slope. There was no vegetation growing on this cut-away embankment, and in fact the erosion had caused the embankment to be cut back underneath the overhang of the vegetation at the top. As the tractor’s right front tire passed over the overhang, the overhang gave way allowing the soil to crumble down the embankment. The right front of the tractor fell down over the embankment pulling the tractor and brush-hog down in a forward and right roll direction. The tractor immediately rolled as it proceeded down this steep embankment and effected a complete 360 degree turn, rolling over on its right side, crushing the operator, and then continuing to roll until it ended right side up in the streambed itself. 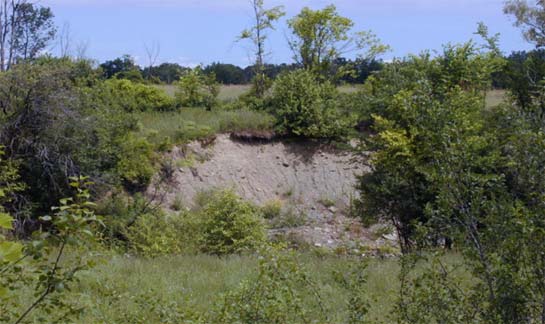 The tractor operator was crushed in the initial 180 degree overturn, and as the tractor continued to roll, the operator was left on the embankment with his body sliding down the steep embankment, coming to rest at the bottom near the creek. The tractor’s impact in the streambed caused both the right front and the right rear wheels to break off of the hubs of the axles.

The cause of death was reported by the Coroner as massive crushing injuries to the chest and upper body region.

Recommendation #1: Equip all tractors with rollover protective structures (ROPS) and a seatbelt.
[Note: Owners of older model tractors should contact their county extension agent, equipment dealer, or equipment manufacturer to determine if retrofit ROPS and operator restraint systems are available for their equipment. Such systems should be installed by the manufacturer or an authorized dealer.]

Discussion: Preventing death and serious injury to tractor operators during rollovers requires the use of ROPS and a seat belt. ROPS can either be a two-post, a four-post, or a design that is incorporated into an approved ROPS cab. The rollover protective structure is designed to protect the operator in the event of an overturn. A seatbelt is part of this ROPS system, which ensures that the operator remains in the zone of protection in the event of an overturn. OSHA regulations require that all tractors built after October 25, 1976 and used by employees of a farm which employs 11 or more must be equipped with ROPS and a seat belt. In New York, many older tractors (pre-1976) are in use on family farms and are used by the farm owner or used on farms that have less than 11 employees and therefore do not fall under OSHA regulations. Given the steep slopes and environmental conditions that deteriorate field roads in New York, all farmers should voluntarily have their older tractors retrofit with a properly designed, manufactured, and installed ROPS and seat belt. If the tractor involved in this incident had been fitted with a ROP and seat belt, and the seat belt had been in use, this fatality might have been prevented. Retrofit ROPS kits are available for the type of tractor involved in this incident.

Recommendation #2: Evaluate the terrain prior to beginning an operation with a tractor, and mark hidden hazards for visibility.

Discussion: In this scenario the worker did not fully recognize the hazards of the bank and the safe turning area in relation to the steep embankment. If he had inspected this area on foot prior to operation of the tractor within this area he would have seen the unsafe area before driving into that region.

Recommendation #3: Workers should be given age appropriate tasks.

Discussion: Reaction times due to advanced age may have contributed to a slower reaction in operating the tractor in this hazardous location (Kenney 1982).