Truck Driver Run Over by Trash Compactor at Municipal Landfill

On February 20, 2002, a 35 year-old male truck driver (the victim) sustained fatal injuries as a result of being run over by a mobile landfill compactor at a local municipal landfill. The victim, a truck driver for a municipal solid waste (MSW) trucking company, was delivering a load of refuse to the landfill at approximately 2:00 p.m. He pulled his semi-truck up to a working face, where landfill employees were operating two landfill compactors and a bulldozer, and started unloading. At approximately 2:20 p.m., one of the landfill compactors backed up along the driver’s side of the victim’s truck to get sand from a sand pile. The back up alarm on the compactor was working properly and the operator stated that he looked through both the rear and side mirrors before he began backing up but did not see the victim in his path. When the compactor curved away from the victim’s truck, the other compactor operator saw the victim lying on the ground next to his semi-truck waving his hands for help. It appeared that the victim had been struck by the compactor as he was putting a broom into his truck following unloading. The victim suffered massive crushing wounds to his left torso (pelvic area) and left leg. Paramedics were summoned immediately and responded within minutes. The victim was treated at the scene before being transported by helicopter to a hospital trauma center where he died six days later.

On February 20, 2002, at approximately 2:00 p.m., a 35 year-old male truck driver (the victim), who was employed by a municipal solid waste (MSW) trucking company, sustained fatal injuries as a result of being run over by a mobile landfill compactor at a municipal landfill. New York FACE (NY FACE) investigators learned of the incident on February 27, 2002 from an area office of the Occupational Safety and Health Administration (OSHA). On March 5, 2002, NY FACE investigators traveled to the incident site, where they examined the landfill compactor that was involved in the incident, observed the landfill daily operation, and reviewed the company’s written safety programs. During their site visit, NY FACE investigators interviewed the landfill’s environmental engineer, who was in charge of the company’s safety and health programs as well as the superintendent of daily operation. The landfill compactor operator who was involved in the accident and another compactor operator who was present at the time of the incident were also interviewed. The owner of the MSW trucking company that employed the victim and one of the company’s drivers were interviewed several days later. NY FACE staff also reviewed reports from the state police homicide investigator who investigated the incident.

The landfill where the incident occurred had been in business for more than 40 years. It had an average annual employment of 90 and received up to 8,000 tons of waste daily, equivalent to 300 truckloads. The landfill had employed an environmental engineer to be in charge of the company’s safety and health programs. A management safety committee held monthly committee meetings. The landfill had developed written policies for delivering waste and task-specific safe work procedures for the landfill covering operation. Crew safety meetings were held weekly. All landfill employees were required to wear steel-toed safety shoes while working at the landfill. Only some of the landfill employees were required to wear high visibility orange vests.

On the day of the incident, it was cloudy, with the temperature around 50 degrees F. The victim was wearing an earth-tone Carhart suit; he was not wearing a high visibility orange vest. According to the trucking company, the victim delivered his load to the landfill at about 2:00 p.m. He was directed by one of the compactor operators to pull up to a working face where the refuse would be unloaded. Before he reached the discharging point, the victim stopped the truck, got out of the cab and walked to the rear of the trailer to open and secure the trailer door. At the discharge point, the victim parked his truck, facing north, four feet away and parallel to the west (left) of another semi-truck that was unloading at the same time. Two landfill compactors (LP1 and LP2) and a bulldozer, which were operated by landfill employees, were spreading, crushing, and compacting the waste (mixed with sand) at the same working face. 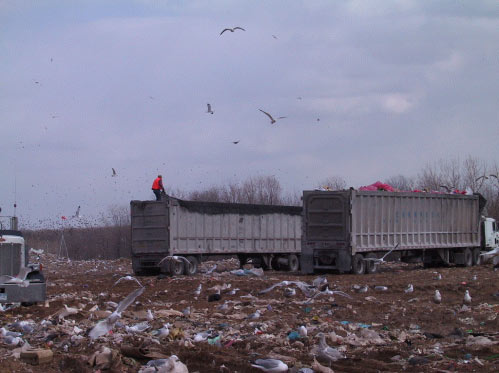 Each landfill compactor used at the time of the incident was about 30 feet long and 15 feet wide and weighed about 100,000 lbs. (Photo 2). It was an articulated vehicle with a front plow to push and spread the waste and sand, and with two sets of double metal wheels to crush and compact the waste. Each metal wheel was six feet in diameter and had 28 evenly staggered triangular metal cleats that were eight inches in height (Photo 3). The compactor moved at a speed of five to six miles per hour. The vehicle had an audible backup alarm, a rearview mirror in the cab and four side mirrors, two on each side. 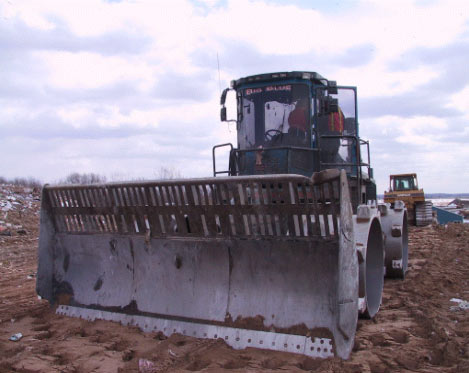 At the time of the incident, the landfill did not have a specific written procedure to coordinate the work of the landfill equipment operators with that of the delivery drivers who often walked in the operator’s blind spot at a working face. 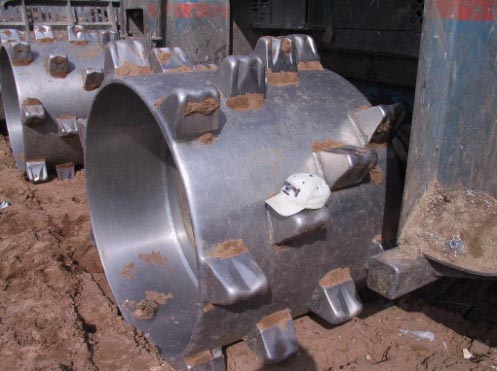 At the working face, as soon as the truck was in the unloading position, the decedent started the hydraulic pump for the walking floor system to begin unloading. Both semi-trucks were left idling while unloading. Meanwhile, both landfill compactors were at the rear (south) of the semi-trucks, pushing and spreading the waste. The victim remained inside the cab until the trailer was half-unloaded. He then got out of the cab to get a broom that was stored on the platform behind the cab and climbed into the trailer through a ladder located in-between the cab and the trailer to sweep and clean the trailer.

Just prior to the incident, LP1 moved to the left (southwest) side of the victim’s truck and LP2 remained at the rear (south) of the two trucks (see Figure 1). At approximately 2:20 p.m. the trailer was completely unloaded and swept. The LP2 operator stated that he saw the driver jump off the rear of the trailer and walk along the west side of the trailer toward the cab carrying his broom. At the same time, LP1 was backing up next to the victim’s truck to get sand from a sand pile located at the left (west) side of the trucks. According to the landfill company representative, the back up alarm of LP1 was working properly at the time of the incident. The LP1 operator stated that he looked through both the back and side mirrors before backing up, and did not see the victim in his path. When LP1 curved to the left (west), away from the side of the victim’s truck, to approach the sand pile, the LP2 operator, whose view of the victim was temporarily blocked by LP1, saw the victim lying on the ground next to his semi-truck, waving his hands. The LP2 operator radioed the LP1 operator to check on the victim. The LP1 operator stopped the compactor immediately and ran over to the victim, who was lying on his back approximately five feet from the driver’s side of the truck next to the platform behind the cab, with his broom lying next to him. The victim had massive crushing wounds on his left torso (pelvic area) and left leg. It appeared that at the time of the incident, the victim was walking to the front of the truck to put the broom back when he was struck by the LP1 compactor as it was backing up. The LP1 operator immediately radioed the landfill superintendent for daily operations and summoned the local emergency rescue crew, who arrived within minutes. The victim was transported by helicopter to a hospital trauma center 50 miles away, where he died six days later as a result of the injuries. 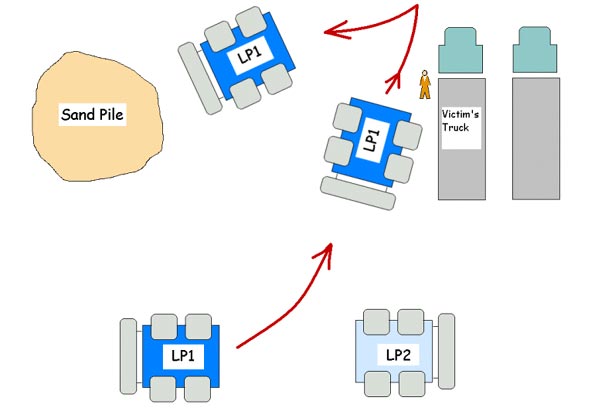 The cause of death was listed on the death certificate as injuries with complications.

Recommendation #1: Landfill employers should develop a landfill traffic control plan that can be used to coordinate the movements of personnel on foot, landfill mobile equipment and delivery trucks on a working face or on any other landfill operations that involve multiple mobile equipment.

Discussion: The traffic control plan should include management, safety, hazard assessment and control elements, and schematic diagrams that depict the movement of landfill workers, delivery truck drivers, and all other vehicles and mobile equipment on a working face. The following elements may be included in the plan:

Recommendation #2: Landfill employers should develop and enforce a policy that requires delivery drivers to remain in the truck cab during unloading.

Discussion: Landfill compactors are often operated in close proximity to the delivery trucks at a working face during unloading. The space between a moving landfill compactor and an unloading truck can be as close as five feet. Given that the operator’s blind spot extends to 35 feet behind the compactor, a driver is at great risk of being run over if he exits his truck. Therefore, he should remain inside the cab during unloading. In order to eliminate or reduce the hazard, the unloading procedure should be modified and the following steps should be considered:

Recommendation #3: Landfill employers should consider using additional safety devices for landfill equipment, to warn drivers when someone is in their blind spot.

Discussion: A variety of devices are available for use on vehicles to identify and alert operators to the presence of objects or individuals in the blind spots behind a vehicle:

Recommendation #4: Landfill employers should develop and enforce a policy that requires all landfill employees, delivery drivers and visitors to wear high visibility safety vests while they are on landfill property.

Discussion: Landfills should require that all landfill employees, delivery drivers and visitors wear high visibility safety vests while they are on landfill property. The delivery companies should require their drivers to wear the vests during delivery. The high visibility safety vests are much easier to spot than brown, navy or black uniforms in the earth-tone background of a landfill.

Discussion: MSW trucking company employers should develop, implement and enforce a comprehensive health and safety program. The program should begin with an analysis of hazards associated with all specific tasks that employees are required to perform and the implementation of controls for those hazards. Employers should ensure that all drivers are trained to recognize and avoid hazardous work conditions and environments in a landfill. Truck drivers should be instructed by their employers to be sure that they have a clear understanding of who is authorized to direct traffic on a working face at the landfill. Drivers should also be instructed to strictly follow the standard unloading procedure at the landfill. This procedure should reinforce the requirement that drivers remain in the truck cab during unloading.