On December 24, 1999, a 39-year-old municipal utility worker was killed when he fell from a hopper while trying to unclog a sludge conveyor chute. The incident occurred in the dryer area of a sewage treatment plant where sewage sludge is dried to a powder. The damp powdered sludge was being conveyed out of the dryer and into a hopper that directed it down through a fabric tube (sock) to a large Dumpster. Due to the freezing temperatures that morning, the sludge had clogged the sock and backed up into the screw conveyor. A co-worker lifted the victim up to the hopper on a forklift where he stepped onto the hopper and tried to clear the clog with a shovel handle. After working on the machine for several minutes, the co-worker heard the victim yell before he fell from the hopper and struck his head against the side of the Dumpster. NJDHSS FACE investigators recommend the following safety guidelines for preventing future incidents:

On December 27, 1999, FACE staff received a newspaper article regarding the death of a municipal utility worker in a work-related fall. As this incident involved a public employee (a NJ FACE focus area), a FACE investigator contacted the employer and arranged an investigation that was conducted on January 10, 2000. During the site visit FACE investigators spoke with company representatives, observed and photographed the incident site, and interviewed a witness. Additional information was obtained from the New Jersey Department of Labor, Office of Public Employees Safety, the police report, and medical examiner’s reports.

The employer was a municipal utility authority (MUA) that treated wastewater for six municipalities. Established as a sewage authority in 1947, the MUA evolved over the years as the laws changed, eventually collecting waste from the surrounding communities. The plant had the capacity to process 5 million gallons of sewage each day and was processing 3.5 million gallons at the time of the incident. Fifty unionized employees worked at the plant, with six employees on duty at the time of the incident.

Sewage sludge is the term for the solid wastes that have been separated from household sewage. In this process, sewage was piped to the plant from the surrounding towns and passed through a grit screen to remove larger inorganic wastes. The sewage was then sent through primary and secondary treatments, with the liquid sludge separated into a holding tank. A thickening tank and filter press removed water from the sludge until it was composed of 24% solids, at which point it was passed through a dryer that dried and sterilized the sludge, rendering it to 90-98% solids. The powdered sludge was blown into a storage silo or conveyed into Dumpsters and sent to a landfill for disposal. The remaining liquids were filtered, chlorinated, and released into a nearby stream. Besides sewage, the plant also processed landfill leachates and nonhazardous digester wastes. This particular process is done in only four other plants in the United States

The incident occurred outdoors at a loading dock near the plant’s sludge dryer. A screw conveyor moved the dried sludge from the dryer and out of the building to a loading dock. The conveyor ended at a hopper feeding a large flexible fabric chute (sock) that directed the flow of sludge into a Dumpster located below. The hopper measured about 30 by 30 inches and was approximately 13 feet off the ground and seven feet from building (see photo). All parts of the conveyor and hopper were enclosed, with a hinged door at the top of the hopper to allow access to the top of the sock. At full speed the process could fill a 23-yard Dumpster in about eight hours. Drying was a continuous process that took two to three hours to shut down, and the conveyors were run even as the workers unclogged jams in the sock and hopper

The incident occurred on Christmas Eve, December 24, 1999. That morning the weather was cold and windy, with temperatures reaching a low of 23° F. At 3:00 a.m. the victim’s co-worker arrived and started work at the carbon regeneration process. When the boilers for the process did not work, the co-worker shut down the machines and helped in other parts of the plant. The temperature in the dryer area was so cold that the sludge was thickening up and “torquing” the machine, so he closed all the doors in the area to keep the heat in. There was also a clog in the sludge conveyor sock, which was common in the cold weather since the damp powdered sludge thickens in contact with cold air. A plug backs up the flow of sludge to the hopper, causing excess sludge to be pushed out through the hinged panel on top of the hopper. The usual method of fixing this was to first clear the sock and then unclog the sludge that had backed up at the hopper, an operation that took about 20 minutes for the co-worker to complete.

At 7:00 a.m. the victim arrived and went to work at the sludge dryer. After a short time another plug formed in the sock so the victim and his co-worker went to unclog the machine. Using an all-terrain forklift with a pallet on the forks, the co-worker raised the victim to the edge of the Dumpster where he cleared the sock by beating on it with a shovel handle (a 40 inch-long, “D” grip handle without a shovel head). He was then raised up to the hopper where he stepped off the pallet and onto the machine. The co-worker was unable to see the victim as his view was blocked by the pallet on the forklift. Apparently the victim opened the hopper cover and started to unclog the jam with the shovel handle. He worked at this for about five minutes when the co-worker heard the victim yell and then saw him falling from the hopper. He landed on a canvas tarp covering the Dumpster and struck his head on the edge of the container. The co-worker immediately went into the plant laboratory for help and called 911 as the other workers went to the victim. EMS personnel arrived and found the victim unresponsive and not breathing. Resuscitation efforts were started but the victim was pronounced dead at the scene. The victim’s injuries included head injuries and a broken neck.

It is not known how the victim fell. The top of the hopper was sloped downward and not designed for a worker to stand on. In addition, the area between the hopper and the loading dock roof was low and crowded by the machine, making it difficult for the six-foot tall victim to stand or move. The hopper may also have been slippery from the moisture and cold temperatures. It was reported by the co-worker that the victim was wearing a half-mask dust respirator when he fell. 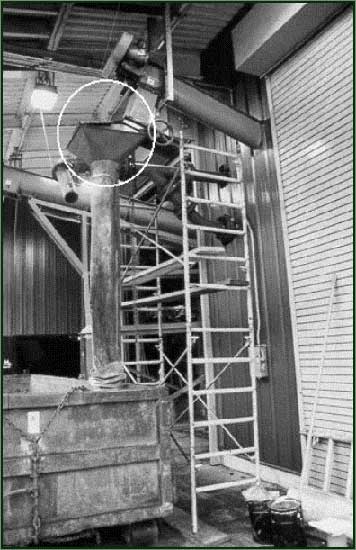 Recommendation #1: Employers must provide a suitable working platform or a personal fall protection system when employees are working at heights greater than six feet.

Discussion: The hopper and surrounding area were not designed for workers to stand on. In areas that require routine maintenance, FACE recommends that a catwalk or other permanent work platform be constructed to allow workers easy and safe access to the machinery. A mobile personnel lift is also acceptable for areas that need occasional access. For areas that cannot be protected with work platforms, an appropriate fall protection program must be developed. This system may use harnesses, lifelines, safety nets, or other means to protect the employee while working at heights greater than six feet. More information on fall protection systems is provided in the attached OSHA publication, Fall Protection in Construction.

Discussion: Immediately before the incident the victim rode to the top of the machine on a pallet set on the forks of a forklift. This is an extremely unsafe practice and a violation of the federal and state OSHA industrial truck standard 29 CFR 1910.178. A brief examination of the forklift by FACE also noted several maintenance problems including a broken control stem, missing seatbelt, and missing identification plate. FACE investigators recommend that the employer immediately repair the forklift and institute a training and safety program covering the proper use and maintenance of forklifts. More information can be found in the attached NIOSH Alert, Preventing Injuries and Deaths of Workers Who Operate or Work Near Forklifts.

Recommendation #3: Employers should develop written standard procedures for the operation and maintenance of the sludge dryer.

Discussion: There were no written procedures available for the operation and maintenance of the sludge dryer and conveyor. Given the limitations of the machine (it could not be easily shut down) and its tendency to jam, FACE recommends doing a Job Hazard Analysis (see Recommendation #4) to develop written procedures for the operation and maintenance of these machines. FACE also recommends contacting the manufacturer of the machine for advice in correcting the following problems found during the investigation:

Recommendation #4: Employers should conduct a job hazard analysis of all work activities with the participation of the workers.

Discussion: To prevent future incidents, FACE recommends that employer conduct a job hazard analysis of all employee work areas and job tasks. A job hazard analysis is a thorough review of the employee’s work activities and equipment use. Each task is closely examined with the employee for fall, electrical, chemical, or other hazards the worker may encounter. The results of the analysis can be used to design or modify the operating procedures for each area and for the design of a general written safety program. If employers are unable to do a proper job hazard analysis, they should consider hiring a qualified safety consultant. Further information on conducting a job hazard analysis is included in the attached OSHA publication, Job Hazard Analysis.

Discussion: The MUA did not have any training programs or standard operating procedures for the equipment and circumstances surrounding this incident. FACE recommends that employers emphasize worker safety by developing, implementing, and enforcing a comprehensive safety program to eliminate or reduce hazardous situations. Based on the results of a thorough job hazard analysis, this program should include, but not limited to, the identification and recognition of safety hazards and worker training in correcting or avoiding these hazards. The following sources of information may be helpful in developing a safety program and obtaining information on safety standards:

Federal OSHA will provide information on safety and health standards on request. OSHA has several offices in New Jersey that cover the following areas:

The NJ Safety Council provides a variety of courses on work-related safety. There is a charge for the seminars. Their address and telephone number is: NJ State Safety Council, 6 Commerce Drive, Cranford, NJ 07016, telephone (908) 272-7712

Information and publications on safety and health standards can be easily obtained over the Internet. Some useful sites include: