On October 23, 1999, a 26 year-old laborer was severely injured when he was crushed between the cross member of the boom lift-arms and the frame of a skid-steer loader. He died 18 days later. The worker had been standing in a crouched position on the cross member that connected the boom lift-arms, teaching a co-worker how to operate the machine. The co-worker sat on the operator’s seat with the safety bar pulled down, rendering the controls operable. The victim reached into the cab to demonstrate how to raise the boom, slipped, and was caught between the frame and the cross member as the boom lowered. NJ FACE investigators concluded that, to prevent similar incidents, the following safety guidelines should be followed:

FACE staff were informed about this work-related fatal injury on November 15, 1999 by the county medical examiner. The employer consented to participate in the FACE project and a site visit was conducted on February 1, 2000. The company owner was interviewed, the incident site and skid-steer loader were viewed, and photographs were taken. None of the victim’s co-workers were available for interview. Additional information was received from the county medical examiner’s reports, police report, and federal OSHA. The victim was employed by a landscaping company that also cut logs into firewood. The company had been in business for 10 years and had not had a previous serious injury. There were three employees plus the owner. Training was on-the-job; there was no formal training program. The site of the injury was a large field where their equipment was kept and firewood was stored until ready for delivery. The skid-steer loader involved in this incident was manufactured in 1983 and owned by the company for five years. The loader was fully operational and all safety features were intact and functioning. The company owner did his own machine maintenance. Please see page 6, Skid-Steer Loader illustration.

The deceased had worked for the company for 1½ years, left for the same length of time, and returned eight months prior to the incident. He was born in Mexico. According to the employer, he spoke Spanish and English and was the father of two children.

The company did landscaping from Monday through Friday. On Saturdays they cut logs into pieces suitable for firewood. Tree trimmers brought in sections of trees they had cut down, hauling them on flat bed trucks and dumping them in the lot. Workers used a log splitter and chain saw to cut the logs into firewood. They stacked the firewood in large piles for later delivery. The skid-steer loader was used to transport the logs to the log splitter. 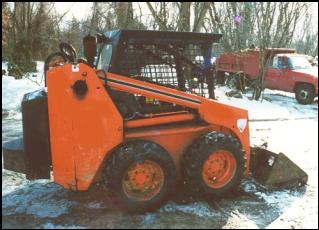 Work started at 8 a.m. on Saturday, with plans to work until 4 p.m. At the time of the incident, around noon, three workers were at the site; the employer was not present. The loader was in the open field with logs weighing about 500 pounds in the bucket.

The victim was operating the skid-steer loader and decided to teach his co-worker to operate it. His employer later stated that he had not authorized him to do so and had told him to allow no one else to operate the loader. The victim stopped the loader, exited, and told his co-worker to sit in the operator’s seat. With the bucket resting on the ground, the co-worker entered the machine by stepping over the boom lift-arms of the machine and onto the cross member behind the bucket, the normal means of entry to the skid-steer loader. The cross member functioned as a step and had a non-skid surface. The loader was manufactured with an interlocked control system that required that a safety bar be secured before operational controls could function. The co-worker sat on the operator’s seat with the safety bar pulled down in front of him, making the controls operable. The victim stood in a crouched position on the cross member at the front of the machine. Facing the operator, he explained which controls operated the loader and which ones maneuvered the boom. He leaned forward and reached into the cab to demonstrate how to operate the controls. 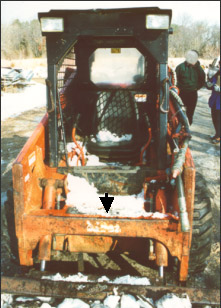 Reaching in, he activated the control to raise the boom. As the boom raised, he was also raised since the cross member on which he was standing was part of the lift-arm unit. This reportedly caused his head to hit the front of the cab roof, so he used the control to lower the boom. When he did this, he lost his balance. His feet slipped off the cross member, he fell forward, and the lower part of his torso was caught between the cross member and loader frame as the bucket lowered. His hand was reportedly on the control bringing the boom down. Probably in a panic, he was unable to move the control to raise the boom. His co-worker asked what to do and the victim told him to turn off the machine and then to turn it back on. The third worker, who had been splitting wood at the site, came to help. Although he did not know the machine well, with the victim’s instruction, he was able to raise the boom. The workers freed the victim from between the cross member and frame. One of the workers tried unsuccessfully to summon help from a passing motorist. He then ran to a nearby home and the resident called for assistance. Emergency services were summoned, arrived on site and transported the conscious victim to the nearest hospital. He was treated in the intensive care unit until he died 18 days later.

Recommendation # 1: Employers should conduct a job hazard analysis; policies and training should be implemented based upon the findings of the analysis.

Discussion: A job hazard analysis is a procedure used to review each job, identify potential hazards, and design actions and procedures to eliminate or control the hazards. Input from workers who usually perform the tasks is important. Of primary importance is the recognition that hazards exist. Company policies and training should be implemented based upon the findings of the job hazard analysis. An employer may need the assistance of a safety consultant if he is unable to conduct the analysis. A copy of the OSHA Job Hazard Analysis publication is included with this report.

Recommendation # 2: Employers should ensure that workers are trained to operate skid-steer loaders and other mobile equipment.

Discussion: The skid steer-loader in this incident was designed, configured and equipped with safety devices to protect workers from the hazards of inappropriate operation. The skid steer-loader was also equipped with skid-resistant surfaces on the boom cross member connecting the right and left side lift-arms. This surface was intended for use during safe boarding of the machine, not for use as support while the machine was in operation. The victim may have not realized that he was exposed to injury from nip points when activating the controls from outside the operator’s compartment or the potential for loss of balance due to machine motion. However, if he had been safely seated in the operator’s compartment or had not reached in to activate the controls, the injury would not have occurred.

Safety training starts by building an awareness of hazards and procedures and establishing rules so there is no guessing when problems arise. Training helps employees recognize a hazardous situation before it can lead to an injury. Training on the use of the skid-steer loader was on-the-job and should be expanded to involve both classroom training and hands-on experience with a demonstration of proficiency. Training should be conducted as part of an organized safety program by someone knowledgeable in the safe use of the machine and the work environment.

Training may be based on the OSHA standard for training in the use of powered industrial trucks (29 CFR 1910.178).

To eliminate instructor exposure to the hazards of moving equipment during training and demonstration, printed materials and videos could be used to explain the operating controls. Printed materials and videos are available from equipment manufacturers and distributors. Orientation sessions with the trainee seated in the operator’s cab with the bucket on the ground, and the engine not running, while the instructor points out the controls and explains their function would allow hands-on familiarization without exposure to machine movement. The trainee cold then be allowed to operate the machine while the instructor observes from safe distance. 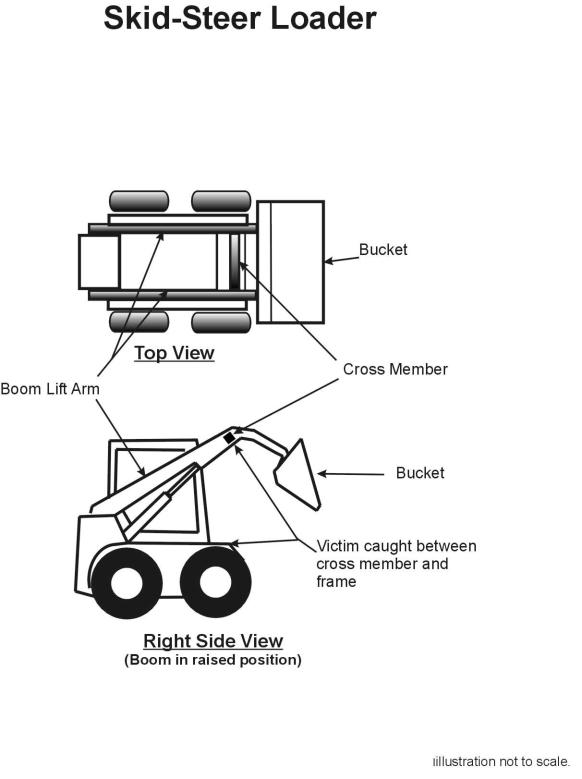 Staff of the New Jersey Department of Health and Senior Services, Occupational Health Service, perform FACE investigations when there is a report of a specific type of work-related fatal injury. The goal of the FACE project is to prevent occupational injuries by studying and identifying the risk factors that contribute to workplace fatalities, by recommending intervention strategies, and by disseminating information to employers and employees. All New Jersey FACE data are reported to NIOSH for trend analysis. All identifiers are removed from the FACE reports and other data to protect the confidentiality of those who participate in the program.