A 54 year-old male pressman fell approximately 41 inches from a printing press. He fell face first to a concrete floor and was taken to a hospital where he died later in the day from a heart attack.

The Nebraska Department of Labor (NDOL) investigator concluded that to prevent future similar occurrences, employers and employees should:

The goal of the workplace investigation is to prevent work-related deaths or injuries in the future by a study of the working environment, the worker, the task the worker was performing, the tools the worker was using, and the role of management in controlling how these factors interact.

This report is generated and distributed solely for the purpose of providing current, relevant education to the community on methods to prevent occupational injuries.

On March 13, 1995, a 54 year-old male pressman died from injuries sustained when he fell approximately 41 inches from a printing press to a concrete floor. The NDOL investigator went to the incident site with OSHA on the morning of March 14, 1995. Interviews were conducted with the employer and witnesses to the incident.

The employer is a large printing company which produces magazines as well as many other printed materials. The company has been in business for 75 years and employs 2,000 people. This was the first fatality in the history of the company. The Human Resources Manager also served as the Safety Manager. The company had a written safety program.

The victim, who had been employed by the company for 22 years, started his shift at 11:00 p.m. on March 12, 1995. He was in the process of preparing a printing press for operation. The particular press he was working on had problems with the paper in the webbing process. This is the process where the paper is threaded through the rollers on the press. The paper kept breaking and they had to keep rewebbing. At one point the paper wrapped around one of the rollers. The machine was made safe and the paper was removed. The victim was apparently climbing down from the press when the incident occurred at 12:30 a.m. on March 13, 1995. Another pressman stated it appeared the victim lost his balance when attempting to place one foot on a small platform on the left side of the press. (See figure 1) The victim had one foot on the second rung of the fixed ladder on the right side of the press and it appeared he was going to put his other foot on the step on the left side. Either he missed the step or his foot slipped off the step. He then fell face first to the concrete floor approximately 41″ from the ladder step. The victim’s co-workers immediately responded to the victim and called 911. The victim broke both his wrists in the fall but was alert and knew what was going on. When the EMT crew responded the victim got up and walked a couple of steps to the gurney. The victim was taken to the hospital where he had a couple of heart attacks later in the day and died at 9:14 p.m. 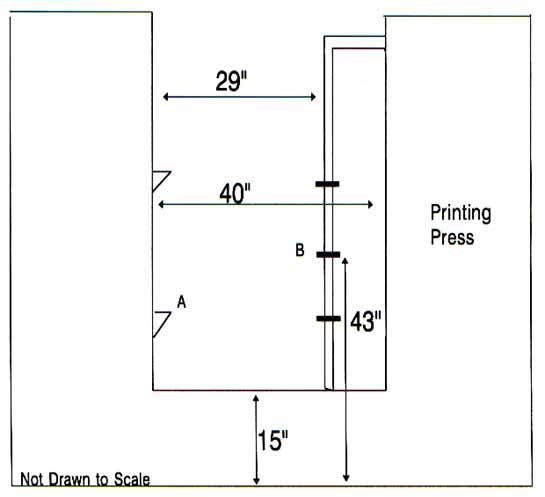 (A is the small platform referred to in report, B is second rung of ladder)

The investigation revealed the victim had been working on a smaller printing press for the past couple of years. The placement of the steps on the left side and right side on the smaller press have a vertical difference of approximately 6″. On the larger press, the one victim had only worked on a short time, the difference in the vertical placement of the second ladder rung and the step is approximately 13″. It is possible the victim was so used to the placement of the steps on the smaller printing press, that he put his foot where he thought the step was. Possibly when he shifted his weight to that foot and realized the step was not there he lost his balance and fell.

A co-worker stated the victim was wearing slick-soled tennis shoes at the time of the incident. This may have contributed to his fall.

The cause of death as listed on the death certificate was ventricular fibrillation.

Recommendation #1: Ensure workers are familiar with the difference in equipment that is similar but not identical, before working on other than their normal equipment.

Discussion: The victim had been working on a different, smaller printing press for the previous two years. The press he was working on when the incident occurred was larger than the one he was used to and the vertical distance between the steps on the left and right side of the press was greater on the incident press. It is possible the victim was used to the distance on the previous press he had worked on and misjudged his step. Workers must maintain situational awareness at all times and be familiar with the equipment they are working on. 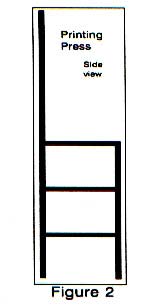 Discussion: The fixed ladder on the incident printing press had three rungs and a side rail which extended beyond the top rung only on the left side. (Figure 2) Had this ladder had a side rail on the right side also, the victim may have been able to arrest his fall, since this was the direction he was falling.

Recommendation #3: Consider requiring the use of non-skid soled shoes when work requires climbing on ladder/equipment.

Discussion: It is possible that with non-skid soled shoes the victim might have been able to get a grip on either the ladder rung, or the step and prevent his fall. It should be noted the employer had a policy which prohibited open-toed shoes and sandals in the workplace. With the inks and other slippery substances in a printing facility a policy for non-skid soled shoes should be considered.