The victim, a 42-year-old female, was killed when the top rung on the wooden ladder she was descending pulled free, causing her to fall approximately 40 feet. The victim and a co-worker climbed a ladder inside a storage warehouse to an overhead walkway to pre-plan some future cleaning work. They proceeded down the walkway for about half the building’s length, then went back to the access ladder. The co-worker climbed down first, approximately 20 feet to a small landing platform, then side-stepped to his right to the next ladder that would take him to the warehouse floor. As he did this, the victim started down the upper ladder. As she placed her left hand on the top rung, the left side pulled free from its supports, causing her to fall to the concrete floor below. The co-worker called emergency response. The victim was taken to a nearby hospital where she was pronounced dead.

The goal of the Fatality Assessment and Control Evaluation (FACE) workplace investigation is to prevent future work-related deaths or injuries, by a study of the working environment, the worker, the task the worker was performing, the tools the worker was using, and the role of management in controlling how these factors interact.

On June 2, 2004, a 42-year-old female warehouse manager died after falling approximately 40 feet inside a storage warehouse. The Nebraska Department of Labor received notice of the fatality the same day through local news media coverage. The Nebraska FACE Investigator met with the investigating OSHA Compliance Officer (COSHA), and company officials away from the incident site on June 3, 2004. The FACE investigator and COSHA officers visited the mishap site that same afternoon. Investigating law enforcement personnel were interviewed on June 8, 2004.

The victim’s employer is a storage company that owns three separate warehouses. These warehouses hold U. S. Government commodity powdered milk. The company has been in business since 1980. The incident warehouse was bought in the late 80s, exact date unknown. At the time of the incident the company employed 4 personnel.

The company has no history of previous employee fatalities. It does not have a written safety & health program.

Victim: The victim was a 42-year-old female. She had been employed by this company since April 1, 2003 as a Warehouse Manager. She normally worked 8 hours per day, five days per week, but that could vary depending on the schedule of trucks bringing in or taking out commodities. Work could be performed at any of the three warehouses, but she was manager at only the incident site. Normal work duties included loading and unloading of trucks carrying the powdered milk, sweeping and general cleanup inside the facility, and grounds maintenance outside. She was known as an employee that would “go above and beyond” in completing tasks.

Victim training: The victim had not received any formal safety & health training from the employer.

Co-worker: The co-worker was a 24-year-old male. He had been employed by the company for 6 months as a laborer. He and the victim worked together as a team to load and unload trucks and provide general upkeep at the incident warehouse. When needed, he operated the forklift that was located in the warehouse. He had been previously employed as a communications tower climber/laborer for three years.

Co-worker training: No formal safety & health training had been provided by the employer. He had previous forklift training, but had not had that training verified since hiring with the present employer.

The 130’ x 300’ warehouse was originally built to hold grain. It’s exact age is unknown. The company had owned it since the late 80s. When originally built, there was an overhead conveyor system used to move grain to various sections of the facility. This system was removed prior to the present owner purchasing the warehouse. Access to the overhead area was gained by either of two permanently installed offset fixed wooden ladders located at the east and west ends of the warehouse.

The ladders, built in two sections, were originally installed when the warehouse was constructed. The first section (lower) of the west ladder faced south, going from the warehouse floor up approximately 15 ½ feet to an 18” x 48” wooden landing platform. The second section (upper) faced west, and was offset to the left (south) approximately one foot, continuing upwards to a total height of approximately 34 ¾ feet. The rungs are 2 x 4’s nailed to the wall, with two nails on each side of the 2 x 4 rung securing it to the side rails. There are also 2 x 4’s used as spacers between the rungs.

At the top of the ladder, running across the overhead rafters, were wooden 2 x 6’s that were cleated together, creating a runway/walking surface running parallel to where the conveyor system used to be. It could not be determined during the investigation if this runway was once guarded by a standard rail system. These runway boards still contain grains of corn that get knocked to the warehouse floor by both birds and the vibration from a nearby train track.

To eliminate the continual cleanup of this grain, the victim and co-worker had talked about gaining access to the overhead runway to sweep the grain off. Neither had climbed the wooden ladders before. In an interview with the COSHA, the owner’s wife stated that approximately 10 minutes before the accident the victim called her at the owner’s home. She told her that she and the co-worker were going to take “care of some grain problems” by climbing up above the warehouse floor using the wooden ladders. The owner’s wife told her she didn’t need to do that, as it would probably make the owner mad. The victim laughed and said to “not tell him then” and hung up the phone. Neither the owner nor the co-worker heard the conversation. At approximately 2:30 p.m. the victim and co-worker climbed the ladder at the west end of the warehouse, gained access to the overhead runway, and walked about halfway down the length of the warehouse.

After looking the area over and discussing ways to remove the corn, they walked back to the wooden ladder they’d climbed up on. The co-worker descended first. On the way down the upper section, he told the victim he thought the top rung was loose. He said she verbally acknowledged this, and he continued on down. As he stepped from the landing platform onto the lower ladder section, he heard a “pop” and heard the victim call out his name. He looked to his left as the victim fell past him and attempted to grab her, but was unable to do so. The victim fell to the floor, landing on her right side with her head to the north and her feet to the south. The co-worker jumped from the landing to the floor and knelt by the victim to check on her condition. He ran outside and called 911 with his cell phone, then ran across the street to a private residence for additional help. Records showed the 911 call was made at 2:54 p.m.

Local emergency paramedics arrived and provided care for the victim who was still breathing but unresponsive. An ambulance from a nearby town arrived to transport the victim approximately 15 miles to the nearest hospital, but she died en-route.

Investigating authorities stated that the top rung had pulled completely away from the side rail on the left (south) side, and was only secured to the wall by the two nails on the right (north) side.

According to the death certificate, the cause of death was: Multiple head and internal injuries in 40’ fall.

Discussion: Employers should conduct a safety inspection when buildings are purchased to identify and correct safety hazards. The grain warehouse built before 1980 had been converted into a bulk materials dry storage warehouse. While an overhead conveyor system used to move grain to various sections of the facility had been removed before the building was purchased by the present owner/victim’s employer in late 1980, the rest of the system (fixed ladders at each end of the building and an overhead walkway that ran next to the conveyor) had not been removed. A safety inspection may have identified these ladders and the walkway as hazardous and they could have been removed, grated, or chained off so employees could not use them. If access to the ladders and overhead walkway are gated instead of the equipment being removed, safety training should be provided to alert workers about the potential fall hazards presented by the old ladders and walkway, and that the employer had placed gates around them so that they would not be used.

All ladders shall be maintained in a safe condition. All ladders shall be inspected regularly, with the intervals between inspections being determined by use and exposure. Neither the wooden ladders nor an aluminum ladder (see below) at the incident site had been inspected using prescribed federal safety standards (20 CFR 1910.26-27), which contain very specific requirements for both types
3Ref: Code of Federal Regulations, 1910 General Industry, para. 1910.27(f)

The landing platform for the offset wooden ladder did not conform to minimal federal standards. It must be not less than 24 inches in width and 30 inches in length.
2Ref: Code of Federal Regulations, 1910 General Industry, para. 1910.27(d)(2)(ii)

Aluminum ladder: This ladder is used to gain access to the tops of the pallets for inspection. It appears to be a section of an older extension ladder. Both ends of the aluminum ladder had the side rails twisted, and the base was missing any type of safety feet to prevent slippage on the floor surface. Remove this ladder from service and replace with one that meets federal safety standards.

Overhead runway: The overhead runway did not have any guard rails. Every runway shall be guarded by a standard railing (or the equivalent) on all open sides 4 feet or more above floor or ground level. Wherever tools, machine parts, or materials are likely to be used on the runway, a toe board shall also be provided on each exposed side.
Ref: Code of Federal Regulations, 1910 General Industry, para. 1910.23(c)(2)

Suggestion: During the interviews it was stated that access to the overhead areas was not necessary as a normal job task. For this reason, it is suggested that access to the east and west wooden offset ladders be restricted, either by signage or removal of the ladders themselves. If access is necessary, the use of a personal fall arrest system (harness/lanyard), scissors lift or bucket-type equipment is a much safer method.

Discussion: Although not required by Federal law, the State of Nebraska does require each company that carries Worker’s Compensation insurance on their employees to have a Safety Committee and an Effective Written Injury Prevention Program.

Nebraska’s Workplace Safety Consultation Program was brought about by Legislative Bill 757 (LB 757) in 1993. It mandated that employers: 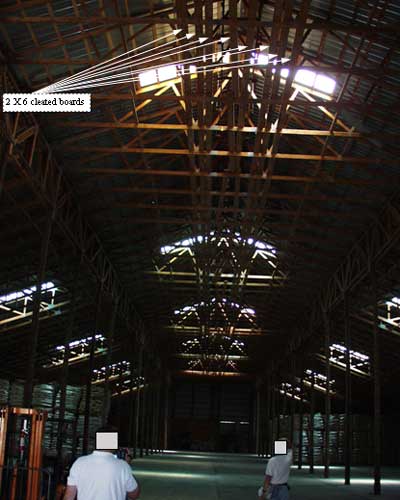 Inside of warehouse looking east. Arrows indicate overhead
2 x 6 boards used to walk along area where conveyor
originally was installed.