The victim and a co-worker were employees of a cleaning and painting company. Their employer had rented a four-wheel drive manlift for cleaning and painting the facility. The operator’s platform of the manlift was attached to the end of a telescopic boom and was surrounded by safety railings. An operator’s control panel was fastened to the top of the safety railing. While facing the control panel, the operator was able to drive the manlift forward and backward and change the position of the work platform.

The victim drove the manlift across the platform scale but he was not facing the direction it was moving. The platform was raised to a height where the top of the safety railing was a few inches below the bottom of the I-beam. As he drove the manlift, the safety railings of the manlift passed beneath the I-beam and the victim was pinned between the beam and the control panel. He was found by his co-worker who placed a call to emergency personnel. Rescue personnel arrived at the scene shortly after being notified. They removed the victim and pronounced him dead at the scene. MN FACE investigators concluded that, in order to reduce the likelihood of similar occurrences, the following guidelines should be followed:

On the day of the incident the victim and a coworker were working at a waste food processing plant. The plant used expired human food products such as dry cereal, baked and unbaked bread, cookies and other dough products and frozen pizza as the primary ingredients to produce an animal feed supplement. The plants end product or feed supplement which is known as “bakery meal” is used primarily as a swine and poultry feed supplement. The processing or production capacity of the plant is approximately 4000 tons per week.

At the time of the incident, the plant was not in production operation due to an explosion and fire that occurred several months earlier. Since the occurrence of the explosion and fire, the entire plant had been undergoing extensive refurbishing including the installation of some new processing equipment. Refurbishing activities also included the cleaning and repainting of large portions of the plant that sustained various levels of smoke and water damage.

The victim and a co-worker were the only workers at the facility on the day of the incident however the victim was working alone in the feed bay at the time. They were not employed by the company that owned the process plant but were employees of an out-of-state cleaning and painting company. The out-of-state company had been contracted to clean the facility and repaint portions of the plant. The painting company had rented the four-wheel drive manlift (Figure 1) to use while cleaning and painting the facility. The victim was also operating a high-pressure power wash from the manlift platform. He was washing the ceiling and walls of the feed bay plus the overhead conveyor located in the bay.

The platform of the manlift was only large enough for at most two workers, had a lift capacity of 500 pounds and was attached to the end of a telescopic boom. The platform was surrounded but safety railings and was accessible through a hinged gate that also served as part of the platform’s safety railings. An control panel was fastened to the top of the safety railing and allowed the operator to raise and lower the platform, extend and retract the telescopic boom, and drive the manlift forward and backward. The control panel consisted primarily of several two position toggle switches and a joy stick that were interconnected to a foot controlled switch on the floor of the manlift platform. The control panel’s switches and controls were disabled unless the operator depressed the foot controlled switch and held it in the down position. 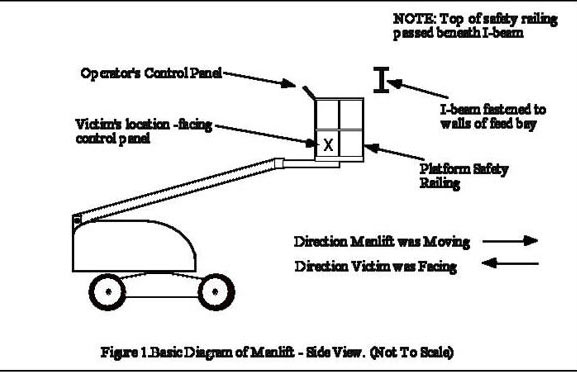 The manlift was positioned on the platform scale and was being backed away from the semi-truck entry door while the victim was facing toward the door. The manlift platform was raised to a height where the top rail of the safety railing was approximately 8-10 inches below the bottom edge of the large steel I-beam. It could not be determined if the victim was actually operating the power washer while he moved the manlift. As he moved the manlift toward the north end of the bay, he apparently was unaware of or forgot that the I-beam was behind him. The safety railings of the manlift passed beneath the I-beam and the victim was pinned between the beam and the operator’s control panel. The manlift stopped with the victim was pinned against the I-beam and he was discovered by his co-worker later in the day. The co-worker immediately placed a call to emergency personnel who arrived at the scene shortly after being notified. The removed the victim from where he was pinned and pronounced him dead at the scene.

The cause of death listed on the death certificate was traumatic asphyxia due to neck compression.

Recommendation #1: Employers should ensure that operators of mobile equipment face the direction of travel or have a coworker assist them while the equipment is moving.

Discussion: Whenever mobile equipment of any type is being moved in reverse, the risk of injury to the operator or coworkers is increased due to restricted visibility. In this incident, the manlift operator was moving the manlift in one direction while he was facing the opposite direction. In addition, he may have been focusing his attention on operating a power washer while the manlift was moving thus further distracting his attention from the safe movement of the manlift. Before moving mobile equipment, workers should always conduct a visual survey of the surrounding area to identify potentially hazardous structures and objects. If mobile equipment must be operated near hazardous structures and objects, a second worker should aid the operator by acting as a spotter to warn the operator of hazardous conditions. If a coworker is not available to act as a spotter, operator’s should conduct a thorough visual survey of the area before moving mobile equipment. If a spotter had assisted the victim in this case or if the victim had conducted a thorough visual inspection of the work area each time before moving the manlift, this fatality might have been prevented.

Discussion: Employers and workers should be aware of hazardous condition at workplaces and should take an active role to eliminate them or ensure that workers are aware of the hazards. Scheduled and unscheduled workplace safety inspections should be conducted by a trained safety person to ensure that job sites hazards are identified and discussed or eliminated whenever possible. In this incident, a safety inspection of the feed bay may have identified the fixed horizontal I-beam as a potential hazard for workers to avoid while working from elevated platforms such as the manlift being used by the victim. Although workplace safety inspections do not guarantee the prevention of occupational injuries, they may identify hazardous conditions that should be corrected or avoided. In addition, they demonstrate an employer’s commitment to the enforcement of established safety programs and to the prevention of worker injury.

Discussion: Employers should ensure that all employees are trained to recognize and avoid hazardous work conditions. A comprehensive safety program should address all aspects of safety related to specific tasks that employees are required to perform. OSHA Standard 1926.21(b)(2) requires employers to “instruct each employee in the recognition and avoidance of unsafe conditions and the regulations applicable to his work environment to control or eliminate any hazards or other exposure to illness or injury.” Safety rules, regulations, and procedures should include the recognition and elimination of hazards associated with tasks performed by employees.

Back to Minnesota FACE reports