On Tuesday, October 29, 2002, a 49-year old journeyman pipefitter was struck in the head by a 6-inch diameter grooved cap he was removing from the end of a pipe. The pipe had been pressurized to test its integrity and was still under 100 pounds of air pressure. The force of the blow from the cap striking him in the face knocked him backwards over the rail of the scissors lift that he was standing on to a concrete floor 14 feet below. When his co-worker, working on the lift immediately to the left of the victim, heard the noise, he looked to his right, but the victim was already on the floor below the lift. Figure 1 is a photograph of the pipes on which the men were working with the scissors lift (shown in the retracted position) below. The second pipe from the left is the pipe involved in the fatality. It was recessed into the wall opening from the force of the end cap exploding off of it.

Another co-worker who heard the noise came to assist and found the victim bleeding from the face and having difficulty breathing. EMS arrived shortly, treated the victim, and transported him to the emergency room of a local hospital. He died in the hospital eighteen hours later.

On Tuesday, October 29, 2002, a 49-year old journeyman pipefitter was struck in the head by a 6-inch diameter grooved cap he was removing from the end of a pipe. He died in the hospital 18 hours later. On October 30, 2002, MIFACE investigators were informed by the Michigan Occupational Safety and Health Act (MIOSHA) personnel who had received a report on their 24 hour-a-day hotline that a work-related fatal injury had occurred. On February 28, 2003, the MIFACE researcher interviewed the president of the company that employed the pipefitter. He described the events on the day of the fatality as they had been told to him by the pipefitter’s co-worker. He accompanied the researcher into the plant, showed her various parts used for blanking pipes and described their functions, and allowed her to photograph them. The company president also provided the author with photographs of the site where the fatality occurred, copies of the company’s newly developed pressure piping testing and lock out/tag out procedures, and copies of several pages of commercially available welded fittings, flanges, flange adapters, and couplings. During the course of writing the report, the medical examiner’s report, the autopsy, the responding police department’s report and photographs, and the MIOSHA citations were obtained.

The company for whom the pipefitter worked was a mechanical contracting company that installed systems that convey fluids. It had approximately 60 employees, 30 of whom had the same job title as the victim, journeyman pipefitter. The company had been in business for 53 years. The pipefitters were represented by a union. The company was subcontracted to do the work at the site of the fatality. They had been working there approximately six months.

The victim had been a pipefitter for 20 years. He was 49 years old. He had been working for this company for four years. He had not received specific training from his employer for the task he was doing at the time of the incident. His shift started at 7:00 a.m. and ended at 3:30 p.m. He had not been working overtime. The incident occurred at approximately 3:00 p.m. This employer had never had a fatality occur.

The vice-president of the company had primary responsibility for safety, and he reported to the president. He delegated safety responsibilities to the foreman at the jobsite. The vice-president and the site foremen had been trained in various aspects of safety including confined space entry and fall protection. Their training was gained through seminars, conferences, classes and on-the-job. The company had a written safety training program and held weekly safety meetings. Training was provided by the company, the manufacturers of the products they used, and consultants. They used toolbox talks from the Mechanical Contractors Association of America for portions of their training.

On Tuesday, October 29, 2002, at approximately 3:00 p.m., a 49 year-old journeyman pipefitter and his co-worker were standing side by side on a scissors lift preparing to remove 6-inch Victualic grooved end caps from two pipes in preparation for fitting an elbow between the two. They were not wearing fall arrest protection nor were they tied off, because of the type of scissors lift they were working from. The stability of the 30-inch wide scissors lift could have been compromised in the case of a shock load such as could occur with an arrested fall.

The pipes had been pressurized previously with air to 100 psi to test for leaks by the pipefitter. To pressurize the pipes, a test header apparatus was connected to a valve in each of the pipes. The apparatus consisted of a pressure gauge attached between lines connected to the valve on each pipe and a compressed air cylinder. The pipes were pressurized in a separate room approximately 50 feet from where the workers were working. After pressurizing the pipes to the desired psi, the valves were closed and the apparatus removed. Figure 2 shows the pipe valves in the closed position. 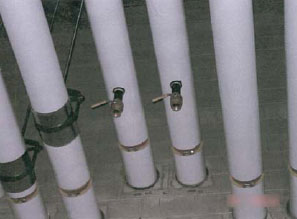 The victim would have been the person to depressurize them. As the pipefitter loosened the bolts on the coupling in front of him in preparation for removing the end cap, the 5-pound, 6-inch diameter cap exploded from the end of the pipe. It struck him in the face with sufficient force to push him over the rail of the scissors lift. He fell 14 feet to the concrete floor below onto his head. When his co-worker heard the noise, he turned to look, but the victim was already on the floor below the lift. Another worker heard the noise, came to investigate and found the victim bleeding profusely from the face and having difficulty breathing. EMS personnel arrived shortly, treated the victim at the site and transported him to a local hospital where emergency treatment was continued. He died eighteen hours later in the hospital.

Figure 1 is a photograph of the pipes on which the men were working with the scissors lift (shown in the retracted position) below. The second pipe from the left is the pipe involved in the fatality. It was recessed into the wall opening from the force of the end cap exploding off of it.

The cap that was used to blank the pipes was referred to by several names. It was called a grooved cap, or Vic cap, or grooved plug. These names describe a method of blanking a pipe that consists of bolting a coupling with a gasket in which the cap or plug is seated onto the end of the pipe. The two pipes on the right in Figure 1 are shown with an end cap attached. Figure 3 shows a coupling and a grooved cap retrofitted with a pressure relieving valve. The caps used at the time of the incident did not have pressure relieving valves.

The following safety changes were made before the MIFACE investigation:

The cause of death as stated on the autopsy summary was “head injuries received at approximately 2:45 p.m. on October 20, 2002, when he was struck by the suddenly released cap of a steam pipe from which he had removed the securing bolts, followed by a fall from an aerial lift platform to a concrete floor. There were numerous facial fractures and left-sided brain injuries. He survived approximately 18 hours in the hospital. No other serious injuries nor any sign of disease contributing to death were present either during hospitalization or a postmortem examination.” His heart, right lung, and kidneys were removed for organ donation.

MIFACE (Michigan Fatality and Control Evaluation), Michigan State University (MSU) Occupational & Environmental Medicine, 117 West Fee Hall, East Lansing, Michigan 48824-1315. This information is for educational purposes only. This MIFACE report becomes public property upon publication and may be printed verbatim with credit to MSU. The author of this report is affiliated with Wayne State University. Reprinting cannot be used to endorse or advertise a commercial product or company. All rights reserved. MSU is an affirmative-action, equal opportunity employer. 10/6/03 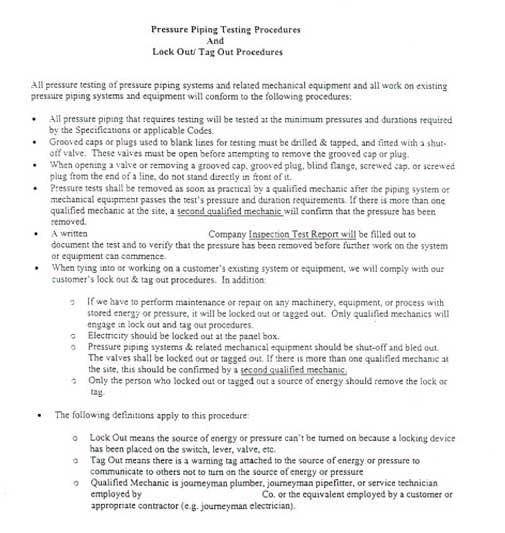 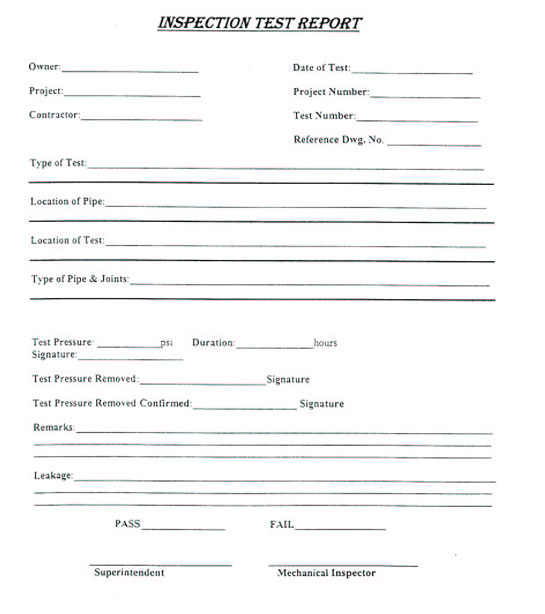