A 62-year-old male was killed when the tractor he was operating punctured an above ground gas line. He had recently moved to the area and was in the process of acquiring some land for farming. The land was overgrown with weeds and brush about 5 feet high. On a warm, clear afternoon he went out to clear the land with a tractor and rotary mower. Although the incident was unwitnessed, apparently he began mowing the field near a roadway and was likely on the third pass when the front of the tractor ran into an above ground valve of a natural gas pipeline (see Photographs 1 and 2) that was obscured by the overgrown brush. The 6-inch diameter steel pipe was punctured allowing natural gas to escape and causing an explosion that caught the tractor on fire and sent flames 40-50 feet into the air (see Photograph 3). By the time the first firefighters arrived on the scene, the fire had destroyed the tractor and had burned a 40-foot circle around it (see Photographs 4, 5, and 6). The victim’s body was found lying on the ground near the tractor, but rescue personnel could not reach him until the fire was contained almost an hour later. The coroner was called to the scene and pronounced the victim dead at 3:30 p.m. In order to prevent similar events from occurring, FACE investigators recommend to natural gas companies that:

On September 19, 1998, FACE investigators were informed of a 62-year-old male who was killed on September 17. A site visit was made on October 1. An interview was conducted with the deputy coroner who also accompanied the investigator to the site of the incident. Photographs and measurements were taken at the site. Copies of reports made by the coroner, medical examiner, and sheriff were obtained. Copies of two local newspapers with articles and photographs of the incident were obtained, as well as copies of additional photographs that were taken at the scene by reporters. A family member was contacted and interviewed by phone. This incident was investigated by the state’s Public Service Commission (PSC); a copy of their final report was obtained and the PSC investigator was interviewed by phone.

The victim had recently retired from an automobile manufacturing plant and moved to the area for family reasons. He had been involved in farming most of his life and was experienced in operating farming equipment. Both the Deutz tractor and Bush Hog rotary mower he used on the day of the incident were in good condition and had been acquired several years ago. According to family member, the victim was in generally good health.

The victim in this case was in the process of acquiring about 10 acres of land from a local plant to raise some cattle. The land, located near a well-traveled road in a rural area, was overgrown with weeds and brush about 5 feet high. A natural gas intrastate transmission pipeline ran parallel to the road and supplied gas for the plant; the 6-inch diameter steel pipe was buried approximately 36 inches underground. Located about 40 yards from the road was an above ground valve used to shut off the flow of gas in an emergency or to allow the line to be depressurized when conducting maintenance.

Photographs 1 and 2 show the aboveground valve that was struck in the fatal incident. (The tall pole present in the photographs was placed there after the incident occurred.) Measurements were taken at the site and are illustrated in Photograph 1: the highest point of the valve was 55 inches; the top of the straight section of pipe was 24 inches from the ground; and, the measurement along the ground at the outermost part of both ends of the pipe was 108 inches. Photographs 1 and 2 also illustrate where the tractor struck the valve.

Although the Public Service Commission (PSC) sets regulations for gas pipelines such as the one in this incident, the gas company that owns the line is responsible for maintenance and repairs. It was reported that an employee of the gas company trimmed the weeds around the valve about twice a month and this had been done during the week prior to the incident; however, it is unknown how much of the tall weeds were cleared away and there are no PSC regulations regarding the frequency of trimmings or the distance required to be cleared around such valves. According to the PSC, there are an estimated 8500 miles of intrastate and interstate transmission pipeline in the state, but the number of aboveground valves like the one in this incident is not known.

PSC regulations require that “line markers shall be placed and maintained along each section of a main and transmission line located above ground in an area accessible to the public” [Regulation 807 KAR 5:022, Section 14(5)(C)] and for buried pipelines, “a pipeline marker be placed at each crossing of a public road” [Regulation 807 KAR 5:022, Section 14(5)(a)1]. Although this aboveground valve was located on private property, and the pipeline did not cross a public road at this point, a line marker had reportedly been placed at that location. This was a commonly used marker made of durable yellow plastic, approximately 4½ feet tall (above ground), 4 inches wide and located about 1 foot from the valve. This marker was not present at the time of the FACE investigator’s visit; however, an orange pole approximately 7 feet tall had been placed there by the gas company after the incident occurred.

About 2 p.m. on a warm, clear afternoon, the victim began to clear the land for surveying using a Deutz tractor with an enclosed cab and a rotary mower attachment. He was working alone and the fatal incident was unwitnessed. The portion of the overgrown field that had been cleared during the incident indicated that he began mowing the section near the roadway and was likely on the third pass when the front of the tractor ran into the above ground natural gas line (Photographs 1 and 2) that was likely obscured by the tall weeds and brush. As shown in Photograph 1, a 2-inch cap on the pipe is used to depressurize the line; the impact caused that cap to break off causing the release of natural gas at approximately 65 psig (pounds per square inch gauge). Apparently the gas was ignited by the tractor’s engine causing an explosion that caught the tractor on fire and sent flames 40-50 feet in the air (see Photograph 3).

Rescue personnel were dispatched when the sheriff’s department received a call about the explosion at 2:36 p.m. By the time the first firefighters arrived on the scene, the fire had burned the tractor and had cleared a 40-foot circle around it. Volunteer firefighters from four other departments arrived on the scene to assist. Gas company officials shut off the pipeline at about 3:20 which nearly extinguished the flames. The victim’s body was found lying on the ground just in front of the melted left rear tire of the tractor, but rescue personnel could not approach him until the fire was contained almost an hour after the explosion. The coroner was called to the scene and pronounced the victim dead at 3:30 p.m. As shown in Photographs 4, 5 and 6, the tractor and rotary mower were destroyed by the fire.

Reportedly, when gas company personnel went to the site to check for damage and make repairs after the incident, they found the bottom section of the vertical yellow line marker that had been about 24 inches underground; the section above ground had been destroyed in the fire. It is not known whether the marker was not visible in the brush or if the victim had been looking in another direction as he approached the line and failed to steer clear of it.

As listed on the death certificate, cause of death was carbon monoxide intoxication due to smoke inhalation in a tractor fire.

Recommendation # 1: Aboveground pipes and valves need to be clearly visible at all times, regardless of location, for safety and emergency purposes.

Discussion: PSC regulations require that pipeline markers be placed and maintained along sections of line located above ground in areas accessible to the public [Regulation 807 KAR 5:022, Section 14(5)(C)] and, at each crossing of a public road for buried pipelines [Regulation 807 KAR 5:022, Section 14(5)(a)1]. In this case, this section of pipeline ran parallel to a well-traveled rural road and single line of railroad tracks, and the aboveground valve was located on private property; thus, according to these regulations a marker was not required to be placed there. However, for emergency purposes, as well as routine maintenance, the gas company needs to be able to find the aboveground valve quickly and easily, regardless of where the pipe is located. Identifying the aboveground portion with a marker or fence that is easily visible both in color and height would assist the gas company in locating the valve, as well as alert others to its existence to reduce the risk of accidental damage to the pipeline and to avoid injury. In this case, the marker was a dull yellow and it may not have been enough contrast from the surrounding weeds and brush to indicate the presence of the aboveground valve. Markers made in a bright neon color such as orange or pink would provide a starker contrast with the outside environment and be more visible. The victim in this case was unfamiliar with the land and it is likely that this fatal incident could have been avoided if a clearly visible marker had been there to alert him to stay clear of that area as he was mowing the field.

Recommendation # 2: Regulations should be considered for maintaining the area around above ground pipes and valves for visibility.

Discussion: There are no PSC regulations concerning the clearing of grass and weeds around an above ground valve. Reportedly, the weeds around the valve in this case were cut by the gas company about twice a month and it had been trimmed in the week prior to the incident. But in this case, because the pipe was in the middle of a field of weeds and brush that stood about 5 feet high, just trimming a small area around the valve may not have made it visible enough for someone to locate it easily and thus avoid it. Regulations should be considered for routinely checking and clearing the area around aboveground pipes and valves in a manner that leaves the area clearly visible and easy to locate.

Recommendation # 3: Aboveground sections of pipelines should be routinely checked for visibility and condition.

Discussion: Routine checks should be conducted on aboveground sections of pipelines to assess for visibility and condition of the pipe/valve as well as the line marker; damaged markers should be replaced, grass trimmed and pipe/valve repairs made accordingly. Performing routine checks and maintenance will reduce safety hazards and ensure the integrity of the pipeline.

Recommendation # 4: Obtain the deed or plat for the land to assess for possible hazards before beginning work on unfamiliar territory.

Discussion: In this case, the victim may not have been familiar enough with the layout of the new property to know of the hazard posed by the above ground gas valve. It is not known if he had checked the plat before mowing the overgrown field; however, to prevent similar incidents in the future, new landowners should take the time to check the deed or plat to identify potential hazards such as pipelines and power lines. In addition, doing a walking inspection on new land to become familiar with it before beginning work with machinery may help identify potential hazards, but in this case because the land was so overgrown with weeds this was not a likely option. 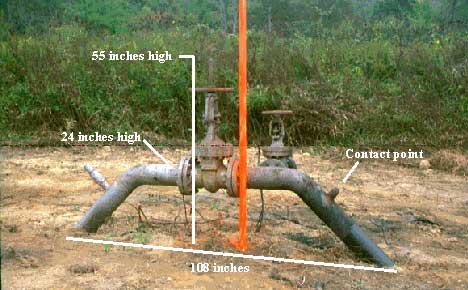 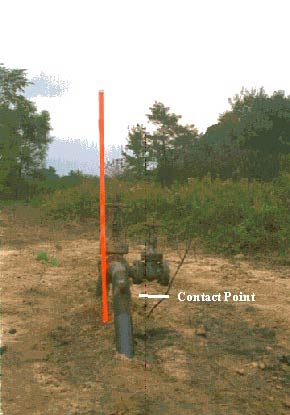 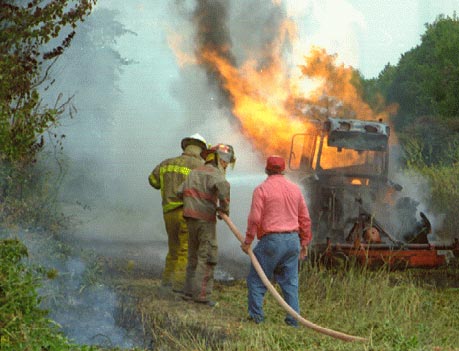 Photograph 3. Firefighting Personnel Extinguishing the Flames from the Explosion 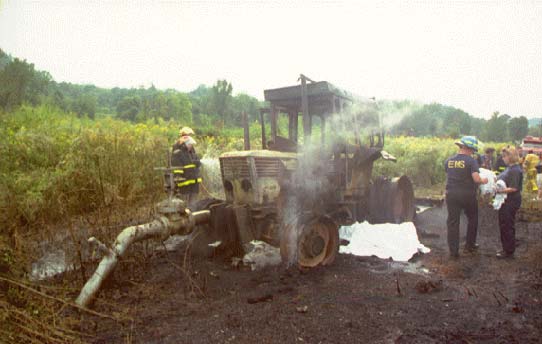 Photograph 4. The Tractor after the Fire was Extinguished 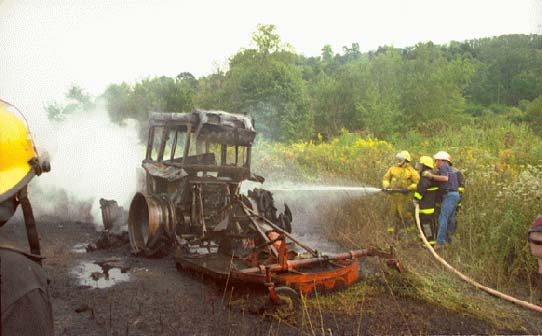 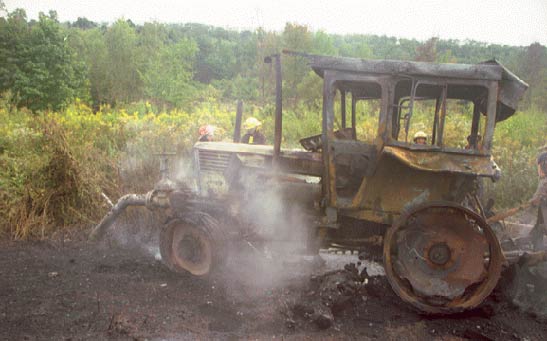