A 61-year-old male logger was killed when he was hit by the tree he was felling. On the day of the incident, he was working on a steep mountainside with his son and another logger. At approximately 10 am, the victim was felling a tree approximately 14 inches in diameter. As viewed from the bottom of the hill, a small tree about 6 inches in diameter stood about 6 feet to the right of the tree that was being felled. Lying on the ground directly behind those two vertical trees was a log 4-5 inches in diameter; it lay perpendicular to the hillside and the two vertical trees. When the victim finished cutting the tree, he stepped over by the small vertical tree and in front of the log that lay on the ground. As the tree fell, it came into contact with the side of another tree that was about 40 feet downhill and the cut end flew up and struck the victim. He was knocked to the ground and pinned underneath the tree as it landed across his abdomen. One of the loggers nearby witnessed the incident and went for help. He called 911 at the property owner’s home which was about one mile from the site. Rescue personnel were dispatched at 10:30 am and arrived within 15 minutes. The coroner pronounced the victim dead at the scene.

On 2 March 1997, FACE investigators were informed of the death of a 61-year-old logger on 28 February 1997. On March 12, a FACE investigator traveled to the site. Interviews were held with the coroner and three loggers who were working at the site and knew the victim; one was the victim’s son who had been working nearby that day but did not witness the fatal incident. The site of the incident had not been altered and photographs were taken of the area. A copy of the death certificate, the coroner’s report, and photographs taken by the coroner at the scene were obtained.

The victim had been involved in the logging business all of his life. He was self-employed and often worked with other family members; the cut timber was sold to local sawmills. About seven years ago, he suffered severe injuries in a logging incident and had returned to logging full-time again during the past year. The victim’s brother was also fatally injured 12 years ago when a log rolled off of a truck and struck him.

On the day of the incident, the victim was working with two loggers; one was the victim’s son and the other was a logger he often worked with. All three were experienced in the logging business. The weather was clear, but the area was wet and muddy due to recent rains. They had been logging periodically on this land for the last six months, when weather permitted. A dirt road led to the site on the mountainside where they were working that day. The land owner’s house was near the dirt road and approximately a mile from the site.

As usual, they began their work early that morning. They were logging an area about 50 yards uphill from the dirt road; the area was steep and densely covered with trees. At about 10 am the victim was felling a tree that was approximately 14 inches in diameter. As viewed from the bottom of the hill, about 6 feet to the right stood a smaller tree about 6 inches in diameter (see Figure 1). On the ground directly behind those trees, was a log about 15 feet long and 4-5 inches in diameter which lay perpendicular to the hillside. When the large tree was cut through, the victim moved to the right and stood in front of the log on the ground and beside the small vertical tree. As the tree fell toward the bottom of the hillside, the top came into contact with the side of a tree that was approximately 12-14 inches in diameter and stood about 40 feet downhill and slightly to the left. The cut end of the tree then flew up and struck the victim. He was knocked to the ground, landing on his back with his upper body falling over the log on the ground. The tree fell across his abdomen and pinned him. One of the loggers who witnessed the incident went immediately to the land owner’s home to call for help. 911 was called at 10:30 am and rescue personnel arrived at 10:42 am. The coroner was summoned and pronounced the victim dead at the scene.

Cause of death according to the death certificate was internal hemorrhage of abdomen due to crush by falling tree.

Recommendation #1: A clear escape path should be planned prior to felling a tree.

Discussion: When felling a tree, two clear escape paths should be planned that are at 45 degrees back from the intended line of fall. The area directly behind the tree is the prime strike area for “butt-jump” injuries. Although the logger moved to the right side of the tree as it fell, and was out of the prime strike area, he did not have a clear path of escape. The tree standing nearby and the log lying on the ground did not allow for a rapid route of escape in the event of a dangerous situation.

Recommendation #2: A hazard analysis of the area should be performed prior to felling a tree.

Discussion: The path of the felled tree should be analyzed prior to beginning the operation. Planning to fell the tree in a direction that is clear or removing trees that could interfere with the felling provides a safer work environment and reduces the risk of injury for the feller and other loggers at the site. Even small trees present a risk of interfering with a planned felling. In this case, an assessment of the area would have indicated a risk of the felled tree coming into contact with the tree that was downhill.

Discussion: Loggers should be aware of proper procedures and safety practices to ensure a safe work environment. For more information about the Master Logger Program, contact Larry Lowe at the Kentucky Department of Natural Resources (502-564-4496). 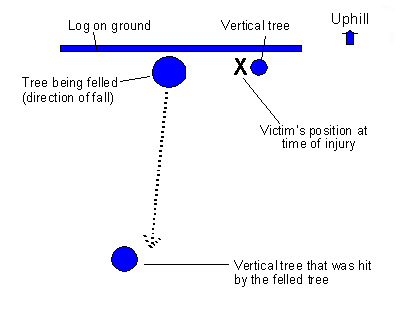 Figure not drawn to scale