A-29-year-old Furnace Technician (the Victim) Dies Trying to Put Out a Trailer Fire.

On January 22, 1997, at approximately 10:30 a.m. a truck driver and spotter were trying to unload a trailer of cullet used in the manufacture of fiberglass insulation for private residences. The hydraulic system on the tractor that brought in the load of cullett did not work. Another tractor was brought in and was hooked up to the trailer load of cullet. Evidence indicates the trailer was parked under three energized power lines with the combined energy of 13,800 volts next to an electrical sub-station. The trailer, measuring 34 feet 8 inches long, was in the elevated position to dump the load of cullet and became entangled in the three power lines that were 27 feet above the ground. There was no over current protection for the three power lines. (See Figure 1.)

Upon contact with the power lines, the electrical energy melted the hydraulic box on the front of the trailer. The spotter at the rear of the truck got out of the way and the truck driver jumped free but still received an electrical shock. The ground was wet and a fire was started at the left rear duals. The victim was in his office at the time of the incident. He grabbed an ABC fire extinguisher and ran outside and attempted to put the fire out. Evidence indicates at this time there was an electrical energy surge that electrocuted the victim. The company’s emergency response team called 911 for the fire and police departments that arrived in a few minutes. The power and light company was notified of the incident and it took several minutes before the lines could be de-energized.

The FACE investigator concluded that in order to prevent similar incidents employers should: 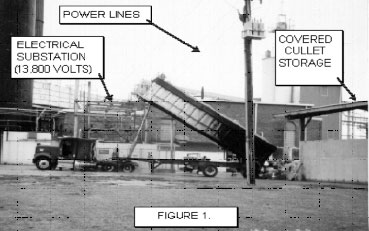 The FACE investigation was prompted by a phone call from the IOSHA compliance officer assigned to the case. The investigation included interviews with the plant manager, plant personnel officer, plant safety officer, company attorney, and the company union official. Measurements and pictures were taken at the scene and the local police department was contacted for detailed information.

The company is a manufacturer of fiberglass insulation for residential use and has been in business since 1937. The company employs 140 workers and works three shifts seven days a week. The company has written safety polices and holds mandatory safety meetings once a month. The victim was employed for three months and but had not received the company’s training on fire extinguisher safety. This is the employer’s first fatality.

Death was due to high voltage electrocution.

RECOMMENDATION # 1: Employers should ensure barricades and barriers shall be installed to prevent accidental contact with energized lines or equipment.

DISCUSSION: In this incident the outside contractor had delivered the cullet by tractor trailer many times before without any previous difficulty. No one knows why, after the change of the tractors because of mechanical problems, the driver decided to park under the three power lines next to the sub-station on the opposite side of the cullet storage building. A barricade or barrier surrounding the sub-station might have prevented this fatal injury. OSHA reg. 29 CFR 1926.957 (3) (c) (1) states: “Barricades or barriers shall be installed to prevent accidental contact with energized lines or equipment.”

RECOMMENDATION # 2: Employers should ensure use of vehicles and other equipment in restricted or hazardous areas shall be be controlled at all times by designated employees.

DISCUSSION: The spotter in this incident was not a company employee even though he had been there many times before delivering trailers of cullett. Evidence indicates the spotter might have thought the trailer would clear the energized power lines. Quite possibly a company employee more familiar with the incident site might have prevented this fatal injury. OSHA reg. 29 CFR 1926.957 (2) (e) states: “Use of vehicles, gin poles, cranes, and other equipment in restricted or hazardous areas shall at all times be controlled by designated employees.”

RECOMMENDATION #3: Employers shall provide an educational program to familiarize employees with the general principles of fire extinguisher use.

DISCUSSION: The victim had been on the job only three months and although he had attended some of the company safety meetings, he had not received formal training on fire extinguisher safety. Formal training could have enabled him to better evaluate the incident site and recognize the electrical hazard caused by the power lines that were entangled on the raised trailer. He would have been less likely to attempt to put out the fire with a portable fire extinguisher. OSHA reg. 29 CFR 1926.150 (5) (2) (c) (xi) states: “Where the employer has provided portable fire extinguishers for employee use in the workplace, the employer shall also provide shall also provide an educational program to familiarize employees with the general principles of fire extinguisher use and the hazards involved with incipient stage fire fighting.”

Back to Indiana FACE reports