In January 1999, a 17-year-old high school student working part-time for a dairy farmer was killed when his clothing was caught by the unshielded power take-off (PTO) driveline of a grinder-mixer (see Picture 1). He had been helping the farmer add sacks of feed supplement to ground corn in the mixer. The task was almost complete and the farmer was closing the hammer mill cover while the youth stood near the PTO driveline in front of the flywheel. Although the flywheel was disengaged, the PTO driveline and unshielded flywheel clutch were rotating at about 200 revolutions per minute (RPM). The farmer heard a thump, then noticed that the boy had been caught and entangled around the driveline at the flywheel clutch. He died instantly from severe head injuries. 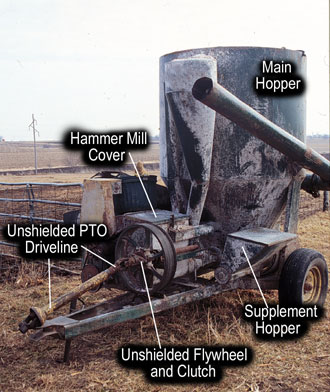 Iowa FACE investigators were notified by an Institute for Rural and Environmental Health co-worker about a PTO-related fatality which occurred in northern Iowa in January 1999. The co-worker had received the information from a radio news report. Additional information was collected from the County Sheriff, County Medical Examiner and a machinery dealer. A site investigation was conducted by two Iowa FACE investigators in the beginning of March. The farmer and his wife were interviewed about the circumstances of the fatal event and the grinder-mixer was observed and photographed. The NIOSH Division of Safety Research was also notified of this fatality by the United States Department of Labor, Wage and Hour Division, and this report is produced in collaboration with NIOSH FACE staff.

The farm specialized in dairy production having 40 milking cows and 160 acres of cultivated land. The farming operation produced its own feed corn, silage, and hay, and purchased additional hay and concentrated feeds. No formal safety program or training was in place. The victim, a high school student, was the only hired help at the time of the incident, although the farmer had employed other youths in the past. The victim had worked regularly on the farm for the last six months during his spare time from high school, and was, according to the farmer, very cautious. The farmer had provided some instruction about safety hazards as they related to the tasks being performed. Although the victim had operated a hay baler, wagon, and a manure spreader, he was not familiar with all farm work and had declined to operate a skid-steer loader when asked because he did not feel comfortable with the machine. 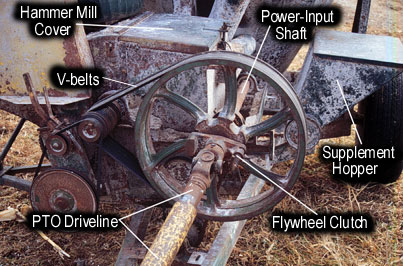 At the time of the injury, the farmer and the youth were mixing feed using the PTO-driven grinder-mixer to combine soybean-based protein supplement with ground corn. The grinder-mixer, a 1970’s model, had been bought used in 1988. It was operated by a PTO driveline, which was permanently bolted to the grinder-mixer’s power-input shaft (see Picture 2 and Picture 3).

The machine had two systems, grinding (milling), and mixing. To use the grinding system, one would engage the flywheel using the spring-loaded drive-pin of the flywheel clutch mounted on the power-input shaft (see Picture 2 and Picture 3). The flywheel would then drive the hammer mill through a set of 12 V-belts. When disengaged, the flywheel floated (remained stationary) on the power-input shaft, while the clutch mechanism, including the spring-loaded drive-pin, rotated with the shaft. With the PTO engaged, the mixing system operated at all times. A feed supplement hopper (see Picture 2 ) was normally used for adding smaller quantities of feed supplements to the mix, however, the discharge auger for this hopper had not worked properly since the farmer had purchased the machine, despite efforts to repair it. 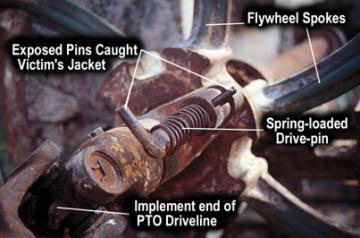 The grinder-mixer was parked inside a corncrib building with its driveline connected to the PTO of a 66 kW (90 hp.) tractor. The tractor was idling, and at idle speed the PTO driveline rotates at about 200 RPM. The farmer and the boy worked in the seven-foot wide space between the machine and the corncrib wall, lifting sacks of soybean-based protein supplement from the floor and carrying and emptying them into the hammer mill housing.

Since the grinding system was not being used, the flywheel was disengaged, however the unguarded clutch mechanism with exposed drive-pin was rotating. After the farmer and the youth had loaded about 25 sacks of supplement into the hammer mill housing, the farmer put the sizing screen back into a slot inside the hammer mill, then closed the hammer mill cover. The youth was standing on the farmer’s left side (see Picture 4), facing the flywheel with his left side close to the spinning driveline. According to the farmer, while he was closing the cover, he suddenly heard a thump, the tractor engine stalled, and he realized that the boy had been caught and wrapped around the driveline. Evidence indicated that the unguarded drive-pin caught the youth’s jacket just below the left pocket and he was instantly entangled. 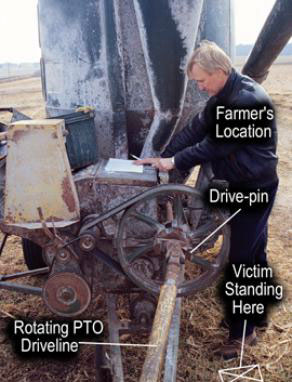 Picture 4. Position of Farmer and Victim

The official cause of death from the County Medical Examiner was “decapitation”.

Recommendation #1: Employers should ensure that PTO drivelines and other drive-train components are completely shielded to prevent worker contact with rotating machine parts. 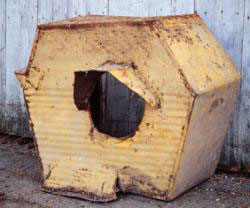 As previously stated, evidence indicates that the youth was standing near the rotating flywheel clutch facing the farmer when his clothing was caught by the exposed clutch mechanism, most likely the spring-loaded drive-pin. He was killed instantly when he became entangled in the PTO.

A total shielding system for a PTO driveline includes a tractor master shield, the PTO driveline shield(s) and an implement shield [1]. Additional shields may be necessary to protect workers from exposure to other moving machine components such as flywheels, clutches, drive belts, and pulleys. For example, the power-input shaft was mounted on the left side of the hammer mill housing. Workers using the hammer mill for loading would be within only a few inches of this rotating shaft. Standards for drive train shields are contained in standards ASAE S318.13 and ASAE S522.

Recommendation #2: Employers should ensure that workers are trained to recognize the hazards of working near exposed rotating machine parts.

Discussion: The victim’s knowledge of work-related hazards depended on verbal instruction and observation of the procedures used by the farmer. The PTO driveline and flywheel shields had been missing during the entire time (six months) the victim had been working on this farm. Considering his age and experience, he may not have been able to recognize that the missing shields created a hazard. Additionally, he had been working alongside an experienced worker, the farmer, while both of them were near the exposed rotating machine parts. Although the farmer recalled seeing demonstrations where mannequins were entangled and destroyed by unguarded PTO drivelines, he stated he did not realize the seriousness of the entanglement hazard when the tractor engine was operating at idle speed only. The PTO for the tractor in this incident is rated 540 revolutions per minute (rpm) at 1,900-rpm engine speed. At engine idle speed (about 700 rpm), the PTO shaft turns at approximately 200 rpm or 3.3 revolutions per second. Even at idle speed an entanglement would occur instantly. All persons operating or working near PTO-driven machines should recognize the hazard of PTO driveline entanglement and the need for complete driveline shielding systems. Workers should understand that even when the driveline shielding system is complete, safe clearance should be maintained to protect against being caught by undetected sharp edges of damaged shields. Workers should receive training in machine-specific hazard identification for all machines they are exposed to.

Recommendation #3: Employers should ensure that damaged machine components and systems are maintained in proper working order.

Discussion: The discharge auger for the feed supplement hopper of the grinder-mixer had not been operable for 10 years. While the alternate method of loading feed supplement into the hammer mill hopper provided a means to mix the feed, loading at this location placed workers closer to the rotating machine parts than loading at the supplement hopper. Also, the PTO driveline was not the only unshielded rotating component on the machine. Although the hammer mill was not being used at the time of the incident, and the flywheel remained stationary, the power-input shaft mounted on the left side of the hammer mill housing was rotating. This unshielded shaft was just below waist-level and within a few inches of a worker loading material into the hammer mill. Loading the material from this location, near the flywheel, may also have decreased the victim’s awareness of the need to remain clear of the rotating driveline. Using the supplement hopper as designed would not have eliminated the hazard from unshielded rotating machine parts, however it may have decreased worker exposure by increasing the distance of the work area from the hazard.

[1] The tractor master shield surrounds the power take-off stub shaft at the rear of the tractor. The driveline shield(s) enclose the PTO driveline between the tractor and implement. The implement shield covers the end of the power-input shaft on the machine being driven. All of these shields extend a sufficient length to cover the entire driveline, including universal joints, clutches, overload protection devices, and driveline connections.