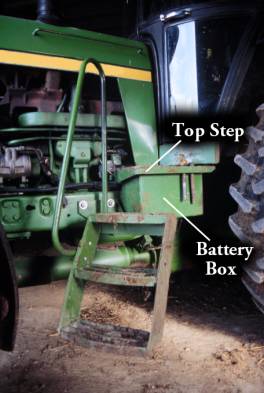 In the fall of 1998 a 42-year-old farmer was killed while he was loading corn into a grain semi truck. Three men at the farm site were unloading their 3rd or 4th load of corn that morning. The victim was operating one tractor with an attached auger wagon, and was unloading corn from the wagon into the semi from the right side. Another farmer, also operating a tractor and auger wagon, was helping and unloading from the left side, while the truck driver was watching the level in his truck. They used two tractors and auger wagons to speed up loading of the semi. When the front hopper was full, the truck driver began to drive forward. As he was doing this, the victim climbed up the steps of his tractor, apparently to shut down the PTO power to the wagon, to avoid overfilling the truck. Suddenly the truck driver heard a yell, and looking in his right side mirror, he saw nothing, but in the right bubble mirror, he saw a pair of legs and immediately backed up his truck. Also at the same time, the helper on the left side of the truck realized something had happened and was making motions for the truck driver to back up. Evidently, the victim had slipped off the top step of his tractor and fallen backwards, landing immediately in front of the duel tires of the semi tractor as it was moving forward. The man was partially crushed in the right chest and abdomen, receiving significant internal injuries, which lead to his death a few hours later. It had been raining earlier in the day and the ground was very muddy. The victim also had mud on his boots, and a glob of mud was found on the top step of the tractor. He was initially conscious and talking after the accident, recalling how he slipped off the top step of the tractor. The man was taken to a large regional hospital out-of-state, yet died later that same day from severe bleeding and internal injuries.

In October 1998 a 42-year-old Iowa farmer was killed while unloading corn into a semi truck. The Iowa FACE program learned about the incident the next day from a newspaper article and began an investigation, collecting information from the County Sheriff, the truck driver, and an implement dealer. A site visit was conducted by two investigators from the Iowa FACE staff, who talked with the victim’s brother and saw and photographed the tractor the man was using.

The farmer worked with his brother on a grain farm growing crops of corn and soybeans, and a few head of cattle. It was a family farm operation with no other employees. The man was a life-long farmer and very experienced with farm machinery. However, the tractor he was using was borrowed from a neighbor for the harvest season, and he had limited experience with that particular tractor. 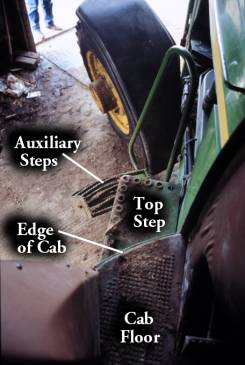 The farmer and his friend were unloading corn into a semi truck from a bin using two tractors and auger grain wagons. The truck was from a local cooperative and while it was on the road transporting grain, the farmer and his helper unloaded corn from a bin into their auger wagons and were ready to unload both wagons into the semi truck when it arrived, thus speeding up the process.

The farmer was driving a newer tractor that belonged to a neighbor. It had a cab and had been modified with an after-market set of steps on its left side, designed to make the tractor safer to enter and exit. The set consisted of three serrated steel non-skid steps and a left handrail (Photo 1). These steps were designed for this model line of tractors to improve the access to the tractor. They were 15 inches wide, 5-6 inches deep, with 9 inches between steps.

Photo 2 was shot from the cab looking down, and shows how the steps are aligned to be parallel to the entrance of the cab. The top step is the rectangular cover for the battery case. It has several holes punched in its edge to improve traction. On the day of our visit, two hitch pins had been placed in these holes as a convenient storage location, but it is not known whether they were present on the day of the fatal fall.

The glob of mud from the victim’s workboot was found on the outside edge of this step, and it is apparent that this is where the man slipped and fell. While climbing the steps it is possible that he slightly missed the step or slipped and lost footing, and did not have a good grip of the handrails at the time when preparing to step into the cab.

The manufacturer of the steps stated they were designed expressly for increased safety, especially for elderly farmers or anyone who might have difficulty climbing up the standard steps on the tractor. They once considered creating a new cover for the battery case, but chose not to. The tractor manufacturer has also came out with their own version of auxiliary steps. In both cases, the top step is the rectangle battery case cover. The step manufacturer recently created steps for the right side of this tractor model also primarily to facilitate washing of the tractor windows.

The official immediate cause of death on the out-of-state death certificate was hemothorax and hemoperitoneum due to right-sided thoracoabdominal blunt force injuries. The contributing conditions were listed as farm accident–partially run over by semi-truck.

Recommendation #1: Tractor manufacturers should give more 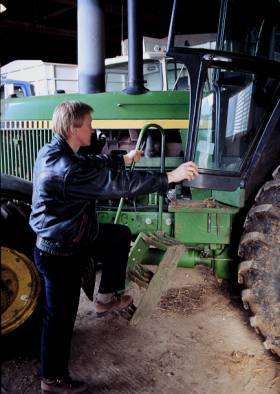 attention to the safe design of steps and handrails to further increase operator safety.

Discussion: Older tractors, especially ones with early cab designs, often have inadequate steps and handrails to help operators mount the tractor safely. Some after-market steps have been developed, which can improve access to older tractors. Newer tractors have been designed to meet ISO and other standards, which require that the steps meet requirements for width, depth, raise, and angle, and that the access has handrails and adequate door width. While newer tractors have improved access, it remains a source of injuries, and attention should be paid to the access design. The problems are greater with existing older tractors, which may have poor steps, too narrow doors, inadequate handrails, obstacles or control levers in the way, and other hazards.

It is commendable that after-market steps and handrails have been developed. It would be important to further develop the ergonomic design of these steps and handrails. In this case, it might be possible that the top of the battery case be changed so that its edge will align with the steps or the entrance of the cab.

Discussion: It is important to have “three point contact” (see Photo 3) at all times when climbing in or out of machinery. This means that there should be a handrail or a grip on both sides of the access, and the operator should have a good grip with both hands. When moving the hands from one grip point to another, both feet should be securely on the steps. This mounting method reduces the possibility of a dangerous fall and is quite easy to learn, but requires handrails or grips on both sides.