During the fall of 1998 a 65-year-old tractor operator was killed when he backed into a tree branch and was pinned between the branch and the tractor’s steering wheel. The tractor was a late 50’s model equipped with a front-end loader. The man was working for a trucking company which buys and resells corncobs. He was working alone loading corncobs into a grain truck at a private farm location when the injury occurred. The farm owner heard the tractor shut off in a normal fashion, and became concerned when he did not hear other sounds for several minutes. He went to check and found the victim pinned under a low-hanging branch of a pear tree. The man’s chest was crushed against the steering wheel and he was obviously dead at the scene. The tractor had been traveling backwards, slightly downhill at the time it hit the tree, and was at a distance from the corn cob pile that was further than necessary for loading. It appears the victim drove too far back while working and ran into the tree branch, however the ignition had been turned off and it remains unclear exactly what happened. The tractor’s brakes were checked by the owner of the trucking company and were found to be normal, in forward and reverse directions. Other controls on the tractor were also working properly. There was no ROPS on the tractor.

In the fall of 1998 a 65-year-old worker for a trucking company was killed while loading corncobs at a farm location. The Iowa FACE program became aware of this through a newspaper article and began an investigation. Information was gathered from the County Sheriff, who had photographed the scene, and the Medical Examiner’s report. A site visit was arranged a few weeks later, and one investigator from the Iowa FACE program visited the farm location and talked with the farm owners. Other information was gathered from telephone interviews with the company owner and the County Medical Examiner.

The victim was employed by a small family-owned trucking company, hired to help load and transport corn cobs for further processing. The company had been in business for 14 years and had three employees, however the victim was working alone on the day of his death. There was no official safety program in place at the small company. The victim normally worked at a farm supply store, yet had worked off-and-on for the trucking company for the last 10 years and had considerable experience with this tractor. Hauling corncobs was a seasonal business; the tractor was also used for snow removal and other odd jobs.

The pile of corncobs was on a private farm, lying between two corn bins and a pear tree. There was a 9-foot drop-off a few feet to the west of the pear tree, and a gradual drop-off to the south, adjacent to a dirt road going up to the corn bin area. The terrain was flat and sloped a few degrees towards the pear tree. A straight grain truck was parked between the corncob pile and the bins, and the victim was loading cobs from the left side of the truck using his tractor equipped with front-end loader (see Photo). The tractor was a gas-fueled, wide-front model from the late 1950’s. It had no rollover protective structure (ROPS). Loading corncobs was a one-man job and the victim was accustomed to working alone.

The farm owner states hearing the tractor shut off normally, then hearing nothing else for some time. He became concerned and went to check and found the victim pinned between the tree branch and the steering wheel of the tractor. Certain facts of this case are inconsistent, for the tractor was found in a forward gear, the throttle was turned up, and the ignition was turned off. This is difficult to explain since the ignition is on the right side of the tractor, and the victim was unable to use his right hand. Due to a previous traumatic injury, he had the use of only one finger on his right hand, and was always seen to reach over with his left hand to turn vehicle ignition keys, etc. 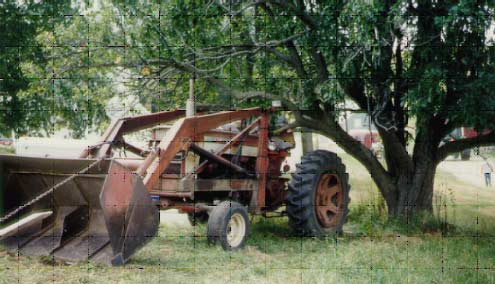 There were no skid marks at the scene, no evidence that the bucket was dragging, and no obvious clues as to what exactly happened. The bucket was empty, which indicates that he was backing off from the truck and getting lined up to scoop another bucketful of corncobs. It is assumed he drove too far backwards, possibly to clean spilled corncobs off the ground, and ran into the low hanging branch of the tree. The distance from the tree branch to the center of the corncob pile was about 40 feet. Had the tree not been there, it is possible he would have continued backwards a few more feet and driven off the 9-foot drop-off.

After this accident, the owner of the tractor tested its brakes in forward and reverse and found them to be operating normally. Other controls on the tractor were also operating as before, and no mechanical repairs were made, other than replacing the broken steering wheel. The tractor did not have a ROPS. From photographs it appears that ROPS would have prevented this fatality by protecting the driver from the tree branch.

The owner of the tractor has replayed the events over and over in his mind and still cannot come to a clear understanding of what happened. It is possible the victim was repositioning the tractor by letting it roll backwards with the transmission in a forward gear, with his left foot pushing in the clutch. The ignition switch may have been turned off when the victim’s body was thrust forward after colliding with the tree.

The official cause of death from the Medical Examiner’s report was, “asphyxia due to chest compression and multiple fractured ribs due to tractor / tree collision”. Autopsy revealed no evidence of cardiac involvement or other natural causes.

Recommendation #1 All tractors should have a rollover protective structure (ROPS).

Discussion: Tractor rollover is the leading cause of fatalities in agriculture; approximately 270 fatalities are caused by rollovers in the United States each year. Rollover protective structure with a seat belt is very effective in preventing fatalities. Furthermore, ROPS can prevent injuries in other circumstances such as motor vehicle accidents, loads falling from a front end loader, and as in this case, protecting the operator from injury when driving into a tree branch or other similar objects. If a ROPS had been installed on this tractor, this fatal injury would have been avoided.

Recommendation #2 A careful site assessment should be conducted to determine the best locations for material piles, trucks and loaders.

Discussion: The corncob pile was created while shelling ear corn, and placed on ground that sloped slightly towards a pear tree and a nine foot drop-off. The truck was placed a little higher next to the bins, and the loading required backing downhill towards the tree and the drop-off, which being at the back may not have been visible to the operator. Loading the pile from the downhill side was chosen probably because the bucket may be easier to fill and the pile is not pushed ahead as much. This arrangement created a fairly short turning area between the corncob pile and the tree or the drop-off. The operator apparently backed too far and was pinned against the tree branch. When possible, materials should be piled and tucks placed so that loading can be done in safe conditions.