A 38-year-old male arc welder died as a result of an explosion at a construction company.

The victim was working at a rural shop location to repair a large garbage truck, which was brought to the shop for repairs that morning. Several items were to be added to the rear of the truck and on the main box. The victim was working near a farm building, a 2-story large wood frame structure, which was used as a workshop and for storage of material used in connection with the construction business. 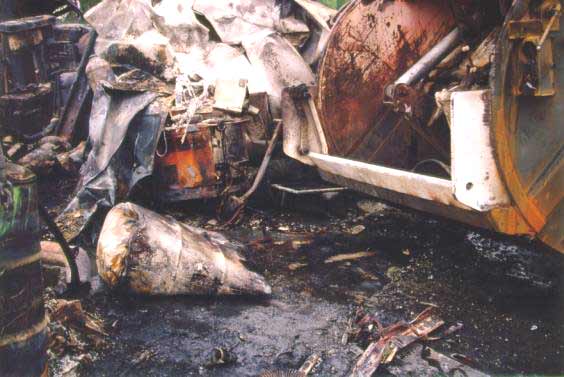 Figure 1. Photo of the incident scene

The victim was arc welding some brackets on the back of the truck. He was apparently welding with a wire welder and used a metal 55-gal barrel as a worktable while welding. Apparently the heat or sparks from the welding ignited residual vapors and/or material in the barrel, causing it to explode. The explosion knocked the victim down, and started a fire in the immediate area. An employee heard the first explosion and saw the building on fire near the back of the garbage truck. The employee ran to the area and found the victim, a large/obese man, lying on the ground, with exploded portions of the drum falling about him. The victim was unconscious, and not breathing. When the employee attempted to move the victim, there were secondary multiple explosions and fires, which forced him to stop. The fire increased rapidly and involved propane and acetylene tanks in the establishment. The employee ran and called the local fire department and county sheriff for assistance.

When the fire department and county sheriff arrived on the scene, the entire building was in flames. The fire was extinguished and the victim’s body was found near the garbage truck parked to the side of the building. The body was taken to a local hospital for an autopsy.

At 10:35 AM on May 21, 1998, a 38-year-old male died as a result of an explosion, which occurred while he was welding parts on a garbage truck. The Iowa FACE program became aware of the fatality on May 22, 1998 from a newspaper article. Information was gathered from the county sheriff, fire department, and medical examiner’s report. Photographs taken by the state fire marshal’s office were reviewed.

The construction company was owned and operated by the victim’s brother, who was also living on the property where the incident took place. However, there was no indication that the victim was working for his brother at the time of the incident. He was working for the garbage truck owner as a freelance welder, repairing and modifying his trucks.

The farm building contained typical electric and water utilities, but they were not involved in the fire. Other environmental conditions were not a contributing factor in this incident.

The victim was at the location to repair a large garbage truck, which was brought to the shop for repairs at 7:00 am. Several items were to be added to the rear of the truck and another item needed to be welded on the main box. There were two heavy pieces of steel that needed to be welded together and then attached to the truck. The base piece was approximately 6 inches by 6 inches and then a second piece was attached to the top. The garbage truck was backed up to the building near a large overhead door on the east side of the building. Another employee noticed the victim welding, with a “stinger” in his hand just minutes before the explosion. The employee also noticed a large 55-gal drum at the rear of the truck, which was being used by the victim when he was welding. 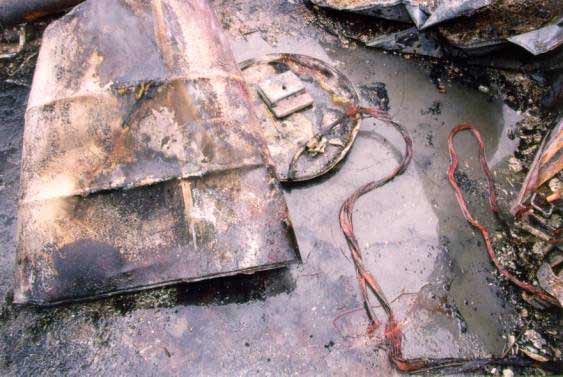 Figure 2. Photo of the 55 gallon drum after the explosion

An employee heard the first explosion and saw the building on fire near the back of the garbage truck and the overhead door. The employee ran to the area at the rear of the truck and attempted to move the victim, but was unable to. He then ran and called for help. The local fire department received the call at 10:35 am with a reported fire and explosion. When the fire department and county sheriff arrived on the scene, the entire building was in flames. As they began to control the blaze, they were told that one person was still in or near the structure. A short time later the victim’s body was located near a garbage truck parked on the side of the building. The victim was found at the rear of the truck laying face up on the ground. The body had sustained major damage as a result of the fire. The victim was removed and taken to the hospital and an autopsy was performed. Autopsy revealed that the victim died from a severe blow to the head and was not killed by the fire. The top of the drum had the impression of the steel piece that was being made for the back of the truck. There were two heavy pieces of steel welded together. A small section of the welding wire was attached to the item. Apparently, the victim was working on this at the time. There were also some areas on the drum where hot metal from the welding process had attached to the top of the drum in the location where the impression was found.

The State Fire Marshal concluded that the explosion took place when the victim was welding two sections of heavy steel together on top of the 55-gallon drum. The victim had apparently attached the ground lead from the welder to the barrel, which may have caused the barrel to heat up during welding, to the point of igniting the flammable material inside. Another more likely scenario is that the welder simply burned through the lid of the barrel with his welding rod, and directly ignited vapors inside the barrel.

Samples of the interior of the drum were taken for analysis, but the State Fire Marshal’s Office was unable to determine what product was in the 55-gallon drum.

The medical examiner’s report stated the probable cause of death as severe traumatic head injuries.

Recommendation #1: Employers should ensure that welders are suitably trained in the safe operation of their equipment and process.

Discussion: Fire and explosion may be a risk when welding improperly. Welding should be conducted following the requirements found in 29 CFR Part 1910 and 1926. These regulations specify that employers must insist that welders and their supervisors are suitably trained in the safe operation of their equipment and process. The employer should ensure that suitable fire extinguishing equipment is accessible.

Welding sparks may travel up to 35 feet. To minimize the danger, all combustibles must be moved at least 35 feet from the work site. Combustible items that can’t be moved, should be covered with a fireproof blanket. The supervisor should determine the combustible materials and hazards present or likely to be present in the work location.

Arc welding equipment should conform to the design and installation criteria (29 CFR Part 1910 and 1926). Grounding of the welding machine should be checked before welding is started. Coiled welding cable must be spread out. A separate electrical connection should be used to ground the item that is being welded, and the ground lead must be firmly attached to the work.

Recommendation #2: Employers should ensure that welding should not be performed on used drums, until they have been thoroughly cleaned.

Discussion: Welding and other hot work should not be performed on used drums, barrels or other containers prohibited until they have been cleaned thoroughly (29 CFR Part 1910 and 1926). Cleaning should be done to be certain that there are no flammable materials present or any substance such as greases, tars, acids, or other materials which when subjected to heat might produce a flammable or toxic vapor. In this case the victim used an old barrel as a worktable, in retrospect, not a wise idea when arc welding. Even a very small amount of residual fuel, oil, or gasoline vapor, when mixed with appropriate air, became an deadly mixture inside the barrel.

Recommendation #3: Employers should develop, implement, and enforce a written safety program. The safety program should include task specific safety procedures and employee training in hazard identification, avoidance, and control.

Discussion: Regular inspections of the work site by a competent person, ensure that safety procedures are being followed, and demonstrate that the employer is committed to the safety program and prevention of injuries. In this case, scheduled and unscheduled inspections should be conducted, and include a review of the jobsite, materials, and equipment to identify hazard conditions.