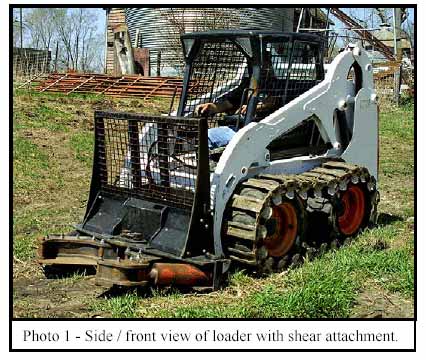 In the winter of 2001, a 25-year-old self-employed tree excavator was fatally injured while using a skid-steer loader equipped with a tree shear attachment. He was working on a hillside, clearing land of small trees. While cutting a large branch of a tree, the weight of the falling branch tipped the loader forward on top of the tree stump, pinning him against the seat.

The hydraulic shear had two horizontal blades that came together to cut trees up to 14 inches (35 cm) in diameter. The trunk of the tree was about 28 inches (70 cm) in diameter at the base, larger than the capacity of the shear. It branched out about three feet (1 m) above ground into three smaller limbs. He had cut branches from the sides and was finishing cutting the last branch, with his loader on the uphill side, facing directly downhill. The attachment was raised up to ~ 4 foot (1.2 m) height, where the branches fanned out. When he finished the cut, and while it was falling downhill, it momentarily transferred enough weight to the front of the shear that it tipped the skid-steer loader forward. The loader landed nearly upside down on top of the stump, which entered the cab area and crushed the operator against the back of his seat. The man was killed instantly. When rescue arrived, the machine could not be started, and airbags and a winch were needed to move the loader.

During the winter of 2001, a 25-year-old self-employed tree excavator was killed while using a skid-steer loader equipped with a tree shear attachment. The Iowa FACE program was notified a few weeks after the incident by the state medical examiner, and began an investigation. Additional information was gathered from the County Sheriff, a relative of the victim, and the manufacturer of the shear attachment. Later in the spring, two FACE investigators traveled to view the machine where it was stored, and examined the hillside where the incident occurred.

The victim was self-employed in the tree-cutting business. He had recently started this part-time business and was also working as a mechanic at a manufacturing facility. He was quite familiar with operating various types of machinery. Being self-employed, he did not have a formal written safety program in place. The machine was bought used about a month and a half prior to the incident from a local dealer. It was used only a few times and was in good condition. 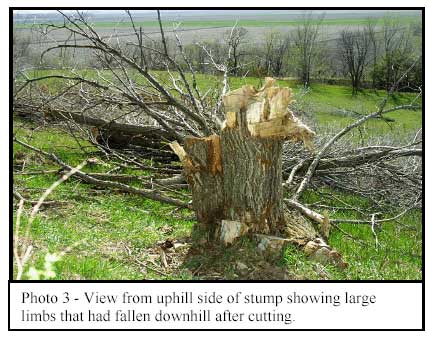 The victim was hired to clear trees from a sloped area of ground used as pasture for cattle. He estimated this job to take six hours to complete. He was about ¾ done when the incident happened. He was using a large skid-steer loader equipped with a front-mounted tree shear attachment. This attachment was designed to cut small trees with a trunk diameter up to 14 inches (35 cm), the branches falling to the front or side of the loader. It was hydraulically-powered through a set of quick-coupling hydraulic lines. Two five-inch (125 mm) diameter hydraulic cylinders powered the heavy horizontally-opposed blades (see Photo 2). The blades were 20 3/8 inches (52 cm) long, and when fully open, measured 24.5 inches (61 cm) between their tips.

The tree stump being cut (see Photo 3) was about 28 inches (70 cm) in diameter at its base, which was much too large for the shear to handle. However, the tree branched out 3-4 feet (1-1.2 m) above ground into three smaller limbs, which the victim had been cutting prior to the incident. It was evident from track markings in the ground, and the cuts, that he had approached the tree from different angles to cut the left and right limbs. At the time of the incident he was positioned directly uphill from the stump for his last cut of the largest limb in the center, which was about 12 inches (30 cm) in diameter (see Image 1). The shear blades were raised to the base of this limb, about 4 feet (1.2 m) off the ground. Apparently after he completed the cut, and while the large limb was falling to the left front of the loader, it transferred enough weight to the shear, that it tipped the loader forward onto its front wheels (see Image 2). The stump was immediately in front of the loader, and entered the cab area, pinning the operator to the back of his seat. The loader came to rest partially upside down, jammed onto the top of the stump. The frame of the cab was slightly bent by the tree stump, which just barely fit through the front opening of the cab.

The landowner drove by and noticed the skid-steer loader tipped forward on its front wheels. On approaching, he saw the victim inside, crushed against the tree stump. He immediately called 911. When rescue personnel arrived, they tried to restart the machine, but were unable, due to the functioning seat pressure interlock safety switch. Airbags and a winch, attached from an uphill position, were used to pull the loader back, but the operator had already died from crushing chest injuries.

There was no door or protective screen on the front of the skid-steer loader. A relative of the victim said the victim was planning to install one to provide protection from smaller branches. The tree shear had a 40-inch (1 m) tall heavy wire brush guard above the blades (see Photo 1). This guard separated the operator from the shear in normal operation, however, provided no protection if the shear was raised several feet off the ground. In addition, when the shear was raised to a 3-4 foot (1-1.2 m) height, there was no visibility of the shear blades, and no way to observe the degree of penetration of the blades.

The official cause of death on the medical examiner’s report was, “traumatic asphyxia due to crush injury due to upset of skid loader”. No autopsy was performed.

Recommendation #1 Skid-steer loaders and their attachments should be used as recommended by manufacturers, not exceeding their capacity.

Discussion: The small wheelbase of a skid-steer loader makes it unstable on sloped terrain, and operators must consider the inherent risk of overturn. Attachments on skid-steer loaders may create additional hazards if not used as designed and recommended by manufacturers. A raised, heavy load will change the center of gravity and further increase the likelihood of tipping or overturn. In this case, the tipping of the machine was the result of using the machine on sloping ground, and having the added weight from the raised tree-shear attachment and the tree limb. The operator’s manual for this tree shear attachment instructs cutting trees low, near the ground level. This will help prevent overturns and the protective screen will be at the right height to provide protection from tree branches. The tree shear attachment was designed for small trees up to 14 inches (35 cm) in diameter. In this case it was used to cut a tree about twice that size. Exceeding the capacity of the attachment created a hazardous situation. The loader had to be re-positioned several times at different angles around the tree for cutting smaller limbs first. While making the final cut, the weight of the branch was enough to tip the machine forward. It is important not to exceed the designed capacity of a tree shear. Larger trees, as in this case, should be left for cutting with a chain saw, or other appropriate equipment.

Recommendation #2 Machines using tree shear attachments should have a barrier on all sides of the operator station to protect from tree limbs and other objects.

Discussion: Operating a tree shear creates frequent hazards from falling tree limbs or branches entering the operator’s area. The operator station must be protected from all sides with a heavy gage metal screen or similar barrier. In this case, the loader had a cab protecting the operator from the top, back and both sides, but the front of the cab was unprotected. The victim had been planning to install a door on the loader, to protect from low-lying branches while cutting trees. A protective door, if of sufficient strength, may offer sufficient protection in the event of a rollover.

Considering the high likelihood of being hit by the tree or falling branches when cutting trees, it is important to have a protective cab totally surrounding the operator. Often skid-steer loaders have an open front area for easy access to the cab. In tree shear operation, the loader should have a protective door made of heavy metal screen or other durable material.

Recommendation #3 Manufacturers of tree shears and similar attachments should warn operators about using the attachments in a raised position, and working on sloping ground.

Discussion: Working on sloping or rough ground involves an obvious overturn hazard. Using the tree shear attachment in a raised position creates additional hazards. First, the attachment and the weight of the tree being cut raise the center of gravity of the skid-steer loader and make it more prone to overturn. Second, it is difficult to see the blades when the attachment is raised 3-4 feet (1�1.2 m), making it difficult and unsafe to operate. Third, the protective screen is above the shear blades, leaving no protective barrier under the attachment. In this case, since the shear was raised up, there was nothing between the operator and the fresh-cut stump. The operator’s manual for this attachment did warn about using the shear attachment in a raised position and on slopes. These warnings should be emphasized in operator’s manuals, perhaps with diagrams similar to Images 1 and 2. Furthermore, warning signs could be placed in a visible location on the tree shear attachment.

FACE is an occupational fatality investigation and surveillance program of the National Institute for Occupational Safety and Health (NIOSH). In the state of Iowa, The University of Iowa, in conjunction with the Iowa Department of Public Health carries out the FACE program. The NIOSH head office in Morgantown, West Virginia, carries out an intramural FACE program and funds state-based programs in Alaska, California, Iowa, Kentucky, Massachusetts, Michigan, Minnesota, Nebraska, New Jersey, New York, Oklahoma, Oregon, Washington, West Virginia, and Wisconsin.