A 40 year-old construction laborer was killed when he was backed over by a rubber tire bulldozer. The victim was doing a grade check on a housing foundation at the time of the incident. The victim gave instructions to the bulldozer operator to back up and away from the housing pad to make room for the scraper to drop a load of dirt. He then walked over to the end of the housing pad to give directions to the scraper operator and to re-set a couple of ground stakes to indicate the level of dirt. The bulldozer operator and victim lost sight of each other when the bulldozer completed a “U” turn while moving in reverse. The bulldozer backed over the victim as he was setting the ground stakes.The CA/FACE investigator determined that, in order to prevent future occurrences, employers, as part of their Injury and Illness Prevention Program (IIPP) should:

On February 12, 2002, at approximately 8:30 a.m., a 40-year-old construction laborer, working as a grade checker, died when he was backed over by a rubber tire bulldozer. The CA/FACE investigator learned of this incident on February 28, 2002, through electronic mail via a newspaper article. Contact with the victim’s employer was made on March 26, 2002. The CA/FACE investigator traveled to the victim’s place of employment on April 11, 2002, and interviewed the owner of the company and equipment operators at the scene. The company’s safety records and witness statements were reviewed.

The employer of the victim was a construction contractor working as a sub-contractor at a residential housing project. The company had been in business for 24 years and had 35 employees working at the time of the incident. The company had been working for approximately one month and had 10 employees at the work site when the incident occurred. The victim had been employed with the company for six years and had worked at the site for seven days when the incident occurred. The task that the victim was performing at the time of the incident was part of his normal work duties.

The employer of the victim had a safety program and a written IIPP with the required elements. Not every task had a specific safe work procedure written and available for employees to follow. Safety meetings were held weekly at the work sites. Training was accomplished mostly through on-the-job-training (OJT). Training records were kept, however, no methods were used to measure the effectiveness of this training.

The site of the incident was a residential housing project. A piece of heavy equipment called a “scraper” would bring a load of dirt and dump it on the housing pad. Another piece of heavy equipment, a rubber tire bulldozer, was then used to spread the dumped dirt level according to the markers set by the grade checker. Both pieces of equipment were equipped with an audible back-up alarm. Both of these alarms were functioning at the time of the incident. The bulldozer operator was wearing a reflective vest, hearing protection and his seat belt at the time of the incident. The victim was wearing a reflective vest, hardhat, but no hearing protection.

On the day of the incident, the victim was setting the grade stakes and directing the scraper to a housing pad that needed dirt. Communication between the victim and equipment operators was mainly visual with the use of hand signals. In order to make room for the scraper to maneuver, the rubber tire bulldozer had to back out of the way. The victim gave the operator of the bulldozer the hand signal to back away from the pad. He then walked to the end of the pad to give directions to the scraper operator as to where to dump his load and to re-set a couple of ground stakes. Ground stakes are used to indicate the desired level for the soil on the pad.

The bulldozer made a complete U-turn in a reverse direction. The operator stated he looked out the rear window by looking over his shoulder instead of using the mirrors to see if it was clear the entire time he was backing. The operator stated he never saw or heard the victim the entire time he was backing. The blind spot on the rubber tire bulldozer was approximately 14 feet from the back of the bulldozer. After completing the U-turn, the operator realized the scraper operator was honking his horn at him and motioning him to stop.

The cause of death, according to the death certificate was crushed trunk and blunt force head and neck trauma.

Recommendation #1: Ensure communication systems are adequate for the task being performed.

Discussion: The form of communication used on this work site was mainly through hand signals. Although this is standard practice in the industry, it can become ambiguous and interrupted when working conditions change. In this incident, the bulldozer operator lost sight of the victim while performing a backing operation. He did not stop to check on the victim’s location or ask for additional instruction when this happened. Whenever heavy equipment and workers on foot are working together, a system should be used that provides continuous, unambiguous two-way communication, such as a walkie-talkie.

Recommendation #2: Ensure that heavy equipment operators do not back their equipment when there are workers on foot in the area unless there is a spotter.

Discussion: In this incident, the victim acted as a spotter while directing the bulldozer’s work. The bulldozer operator followed the victim’s direction by backing away from the pad. However, by making the U-turn while backing, the bulldozer operator lost sight of the victim. In effect, this meant that he had lost his spotter, and there was no one to stop him as he backed toward the victim. Safe work practices can be assured through programs of training, supervision, incentives, and progressive disciplinary measures.

Discussion: Workers on construction sites often work in close proximity to moving heavy equipment. Being exposed on a daily basis to the noise and warning devices of backing equipment can desensitize individuals to the presence of such vehicles. Other devices such as a strobe light or different noises should be considered as additions to the standard back-up alarm to warn workers of a backing vehicle. There are also devices available that can detect the presence of persons in the blind spots of vehicles and provide a warning to the driver. Had some of these additional devices been used on the equipment at this jobsite, this incident might have been prevented.

Recommendation #4: Consider installing equipment on bulldozers that would incorporate the use of a laser, GPS, or sonic guided grading system.

Discussion: There are companies today that manufacture devices, utilizing the latest advances in laser, GPS, and sonic technology, which can be retrofitted to just about any piece of heavy equipment, regardless of the age. By using some of this technology, companies can improve their productivity, and perform grading tasks without the use of grade checkers. This not only is a cost savings, but also enhances the safety on the job site by reducing employee exposure. Had this type of technology been used on this jobsite, this incident might have been prevented. 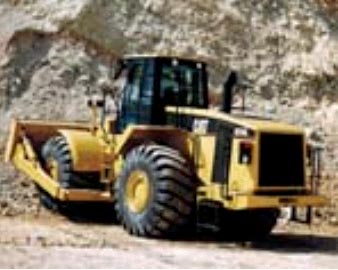