A 24-year-old construction carpenter died when struck by the bucket of a backhoe. The victim was checking the measurements of the footings on the foundation of a building that was being built at the time of the incident. The backhoe operator extended the bucket up and out to empty some dirt, then swung it back toward the work. When the operator swung the bucket around, the victim and co-workers were bent over checking the measurements of the footings and were struck by the backhoe bucket and boom.

On December 27, 2001, at approximately 10:30 a.m., a 24-year-old construction carpenter was struck by the bucket of a backhoe while checking the measurements of the footings on the foundation of a building that was being built. The CA/FACE investigator learned of this incident on January 4,2002, through the legal unit of the California Department of Industrial Relations, Division of Occupational Safety and Health (Cal/OSHA). On February 6, 2002, the CA/FACE investigator traveled to the decedent’s place of employment and interviewed the company’s owner and reviewed the company’s safety policies, procedures, and records. Pictures of the equipment involved and incident scene were also obtained. Further interviews were later obtained from the backhoe operator and the other injured employees.

The company had a safety program and a written Injury and Illness Prevention Program (IIPP) with the required elements at the time of the incident. There was a written code of safe practices for what was considered critical tasks. Safety meetings were held weekly and documented. The company provided on-the-job training for their employees. The company training did not specifically address the hazards associated with the incident; however, the code of safe practices did address this hazard. The results of training were not evaluated and records of employee training were not documented.

The backhoe operator was an independent owner/operator. He had been in business for over 10 years and had been hired for previous jobs by the employer of the victim. Although experienced in backhoe operations, the operator did not have any documentation or certification of formalized training.

The site of the incident was a major learning institution that was being remodeled. On the day of the incident, the owner of the company, the victim, and a co-worker were working with the backhoe laying out and digging the footings for a new building.

At approximately 10:30 a.m., the victim and co-worker were working with the backhoe. The backhoe would either remove or add soil to the foundation that was being built in order to match the elevation markings that were on the existing building wall and grade stakes. The backhoe operator would place the bucket on the ground to the left of the area he was digging while measurements were taken.

There was an error on the elevations marked on the building wall, so the co-worker went to inform the owner, who was about 100 feet away. The owner of the company and the co-worker went back to the building wall and re-checked the measurements of the grade. The owner then returned to his original position to check the plans, then went back and checked the measurements once again. The backhoe operator remained seated on his tractor and used the down time to make a cell phone call. When he finished his cell phone conversation he noticed there was dirt still in the bucket so he activated the bucket up and out to empty it, then swung it to his right. It was only then that he realized he struck three individuals.

The owner, victim, and co-worker were checking the measurements on the grade, with their backs to the backhoe and in a squatting position, when they were struck with the arm and bucket of the backhoe. The owner was knocked into the co-worker. The victim was knocked into the wall of the building. The owner was the first to get up. The co-worker was knocked unconscious but awoke a short time later. Both sustained minor injures. The victim was lying on the ground unresponsive. The backhoe operator got off his tractor and checked on the owner and co-worker. He then went to the victim and immediately started CPR but was unable to revive him. He then called 911. The paramedics responded and transported the victim to the hospital where he could not be revived and death was pronounced.

The cause of death, according to the death certificate, was multiple traumatic injuries.

Recommendation #1: Employers should ensure that backhoe operators are certain the area is clear of all persons before they start and/or re-start operating.

Discussion: Even though backhoe operators might have to stop and start numerous times during the process of a days work, safe work practices demand that they make certain that their work area is clear each and every time. Had the backhoe operator ensured the area was clear of all employees before re-starting, this incident might have been prevented. Employers can ensure safe work practices by establishing work procedures through programs of training, supervision, safe work recognition, and progressive disciplinary measures.

Discussion: State safety rules and regulations presently don’t require any license or certification for operators of backhoes. Although some unions and larger employers do offer in-house training and certification for backhoe operators, there is no prerequisite requiring such documentation. An advantage of requiring such training and certification would be assurance that operators attain specific knowledge on the basic safety situations that may be encountered during normal operations and methods of dealing with these conditions. Another benefit would be reassurance that the operators are familiar with the equipment they’re operating as well as safety requirements in the employers safety programs, and local, state and federal laws, rules, and regulations. A certified operator is an advantage in protecting employer and employee knowing that they include good safety habits. 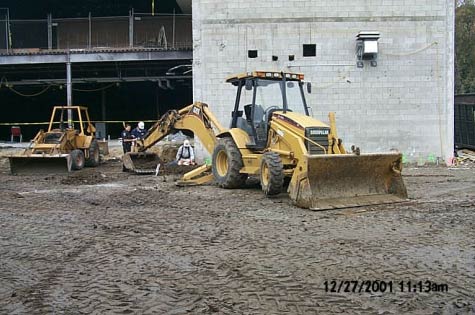 Exhibit #1. View of the incident scene showing the backhoe and the work area involved. 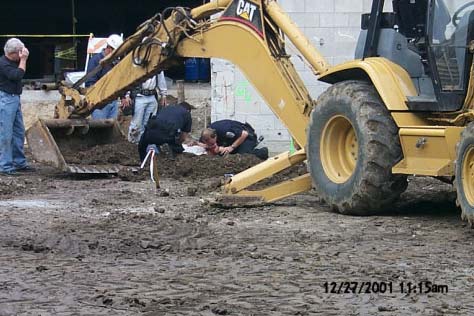 Exhibit #2. A closer view of the backhoe bucket and paramedics performing CPR on the victim before transporting to the hospital. 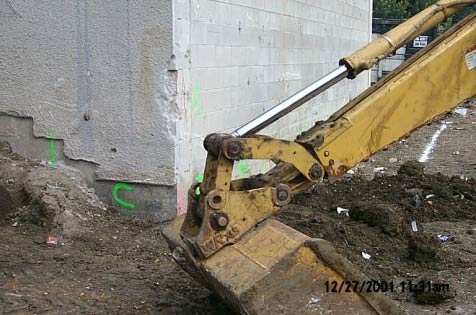 Exhibit #3. A view of the backhoe bucket and the wall with marking used for grading.