A 59 year-old male, working as a spotter for heavy equipment inside a trash collection transfer station, died a month after being backed over by a front-end loader. He was directing and controlling traffic and designating dumping areas on the floor inside the structure at the time of the incident. The operator of the front-end loader stated he did not see or hear the victim immediately prior to the incident. He said he last spoke to the victim approximately 2-3 minutes before the incident. The standard operating procedure was to not operate the heavy equipment within 15 feet of spotters, other pedestrians or vehicles.

On November 20, 2001, at approximately 7:30 a.m., a 59-year-old male, employed as traffic controller/spotter for a waste disposal company, received blunt force trauma to both legs and left arm when he was backed over by a front-end-loader. He remained hospitalized until he died from his injuries on December 28, 2001.

The CA/FACE investigator learned of this incident on January 4, 2002, through the County Coroner’s post mortem report. On March 4, 2002, the CA/FACE investigator traveled to the victim’s place of employment and met with the vice president, safety manager, and witnesses who responded to the incident. The safety and training programs were reviewed and pictures were taken of the work area and the front-end loader involved in the incident.

The employer of the victim was a national industrial waste management company that had been in business for over 30 years. The company had approximately 30,000 employees nationwide at the time of the incident. There were 67 employees working at the facility where the incident occurred. The victim had 25 years experience in his occupation and had been with the company for 25 years when the incident occurred. The victim was a union member and was in his usual work area performing a task that was part of his normal work duties at the time of the incident.

The company, heavy equipment manufacturers, and consultants provided task specific and operator specific training. The type of training provided was classroom and on-the-job training (OJT). Training was measured through demonstration but not formal testing. The company did not require operator licensing or certification.

The site of the incident was a transfer station for a waste management company. The transfer station was a large corrugated steel structure on a concrete slab with sectioned bins that contained waste collected from customers. The transfer station measured 240 feet by 225 feet. Traffic entered the structure through the east side, and then took directions from the spotter as to where to dump their loads. When a load was dumped the front-end loader would push the load into the loading tunnel or into the bin. This would take several back and forth movements. After dumping their loads, the vehicles would then either go to the south wall to clean out, or leave the structure through the exit on the west side. The front-end loaders also took their direction from the spotter to ensure proper load placement. Although the spotters had authority to control all the movement on the transfer station floor, they did not direct every back and forth movement. Allowing no more than six trucks in the station at one time controlled traffic volume. Two or three front-end loaders were operating in the transfer station at any given time. Operators were not to operate their equipment within 15 feet of spotters, other pedestrians or vehicles. Eye contact was required before communication took place between the spotter and operator or driver. On some occasions two spotters would be used and one would be designated as the lead. Spotters were required to wear a safety reflective vest, hardhat and eye and ear protection.

On the day of the incident, the victim was working as the spotter directing traffic and designating dumping areas, varying his location throughout the transfer station. His duties required him to move throughout the station as conditions required. The front-end loader operator, who had over 17 years of experience, was performing his duties in a routine fashion. He was pushing trash in one of the bins with his tractor’s bucket in a northerly direction. When he backed up to his right in an easterly direction to line up with another load of trash, he unknowingly knocked down and ran over the victim with the equipment’s left side. He did not see the victim until after the incident. The operator claimed the last time he saw the victim was approximately 2-3 minutes prior to the incident when he was standing near the center of the south wall. Paramedics were immediately called and they treated the victim for his injuries then transported him to a local hospital where he remained until his death 38 days later.

The cause of death, according to the death certificate was blunt force trauma to legs and left arm.

Recommendation #1: Remove all spotters from the floors of transfer stations.

Discussion: The amount of traffic, the noise of the engines running and the back-up alarms going off can create quite a deafening environment. Even though sprinklers are activated throughout the transfer station to control the dust, with all pieces of equipment operating at the same time, the dust can limit visibility at times. It would be easy to lose track of the position of every vehicle and piece of equipment at any given time, particularly because they are constantly changing location and direction. A reasonable solution to this sensitive safety scenario is to remove the spotter from the floor and locate him in an elevated area where there is no exposure: e.g. a catwalk or a crow’s-nest.

Recommendation #2: Consider using radios to supplement eye contact when communication is needed between the heavy equipment operator, truck drivers, and the spotter.

Discussion: The amount of noise on the floor of the transfer station during normal operating hours make it nearly impossible to hear one another when trying to converse. Notwithstanding the usual precautions taken to reduce the noise environment, verbal confirmation is still very difficult under normal circumstances. The use of radios would greatly enhance the communications needed to control the vehicle placement, dumping, and speed and well as the tractor placement. Had radios been in use prior to this incident, someone might have seen the impending situation and would have been able to give appropriate warning that might have prevented this incident from happening.

Discussion: Being exposed on a daily basis to the noise and warning devices of backing equipment can desensitize individuals to the presence of such vehicles. Other devices such as a strobe light or different noises should be considered as additions to the standard back-up alarm to warn workers of a backing vehicle. There are also devices available that can detect the presence of persons in the blind spots of vehicles and provide a warning to the operator. These additions should be considered especially when the standard practice has failed. 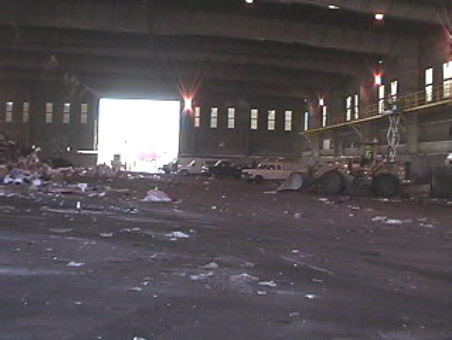 Exhibit #1. View from inside the transfer station looking at the east entrance. 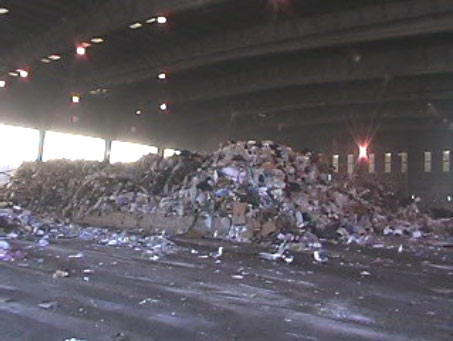 Exhibit #2. View from inside transfer station looking north at dumped waste in a designated bin. 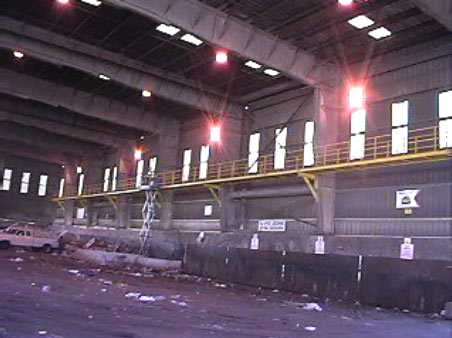 Exhibit #3. View from inside the transfer station looking at the south wall where trucks park to clean out.

Exhibit #4. View of the left side of the front-end loader involved in the incident. 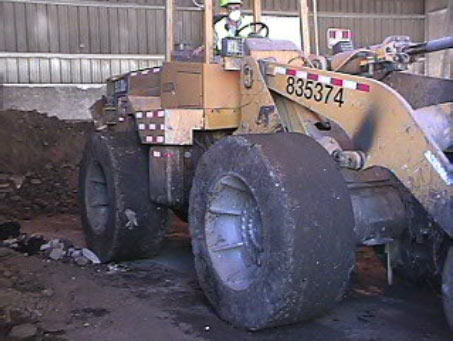 Exhibit #5. View of the right side of the front-end loader involved in the incident. 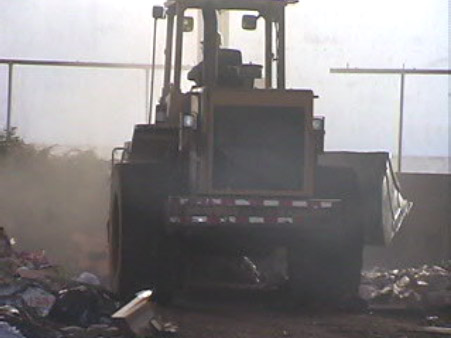 Exhibit #6. View of the front-end loader involved in the incident pushing waste.