A 28 year-old male industrial washing machine operator died when he was pulled inside a washing machine while loading sheets. The loading procedure requires a series of buttons on the control panel to be depressed that maneuvers the machine in different positions. One of these buttons is called the “basket button” that, when depressed and released, allows the washing machine drum to rotate approximately three revolutions. However, when the button is held in the depressed position, the drum will continue to rotate. The loading procedure for sheets was a two-person function. The supervisor was assisting with the loading of the first sling of sheets, and then left the victim to attend to another machine. The victim began loading the second sling of sheets by himself. Approximately five minutes later, the supervisor heard the victim yell and went to his aid. He found the victim inside the machine unresponsive.

On November 8, 2001, at approximately 1:30 p.m., a 28-year-old male industrial washing machine operator died when he was pulled inside the rotating drum of an industrial washing machine he was loading. The CA/FACE investigator learned of this incident on November 9, 2001, through the County Coroner’s post mortem report. On December 13, 2001, the CA/FACE investigator traveled to the victim’s place of employment and interviewed management personnel about the safety and training program, and the supervisor and witnesses who responded to the incident. Pictures of the work area and machine involved in the incident were also taken.

The employer of the victim was a large industrial plant that performs laundry and linen rental services. The company has been in business for over 70 years and had 250 employees on the payroll at the time of the incident. There were approximately 70 employees in the plant when the incident occurred. The victim had seven years experience in his occupation and had been with the company for only three months when the incident occurred. The victim had worked for the company in prior years and was a re-hire.

The employer of the victim had a safety program and a written IIPP with the required elements. There were machine-specific safe operating instructions written for employees to follow. Employees were also required to sign these documents stating they received and understood the instructions. Safety meetings were held monthly and documented. Task specific and machine specific training was provided by the company supervisors and was documented. The type of training provided was classroom and on-the-job training (OJT). Training was measured through testing and demonstration.

The site of the incident was a large industrial plant that performs laundry and linen rental services. The industrial washing machine involved in this incident held 400 pounds of soiled linens, tablecloths, towels, washcloths, or sheets. The smaller items usually could be handled by one operator, however, sheets and other large items usually required two workers to load and unload because of their bulk. The circular opening was 4 feet wide and was located in the front of the machine. The circular door opened to the left. The stainless steel drum was 4 feet deep. The machine operated in an upright position, however, it tilted backward to approximately 70-degrees from horizontal for loading. The floor around the machine was porous cement but wet from the machine. The machine was also equipped with an emergency stop button located on the control panel directly to the right of the machine. The emergency stop button was easily accessible and clearly marked. Also mounted on the side of the control panel was a button marked “basket”. This button, when depressed, would tumble the drum approximately three revolutions to assist in the loading process. Another button called the “water button” activated a flow of pressurized water, from a port located in the door opening at approximately the 2:00 o’clock position, into the drum to also assist in the loading process.

Approximately five minutes later, the supervisor heard the victim yell. He, along with three other employees, went to the victim’s location and found him motionless inside the machine with his body tangled in a loop of sheets. The supervisor stated the washer drum was not turning but he pressed the emergency stop button anyway, just to be sure the power was off. One of the other employees who responded ran to the office to call 911. The paramedics responded within minutes and checked the victim for spontaneous respirations and pulse and found none.

Recommendation #1: Ensure employees do not attempt to work alone for those types of loads that require two people.

Discussion: The victim attempted to load the sling of sheets alone. He activated the basket button, the drum rotated; he became entangled in the sheets and was pulled inside. Supervisors need to assure that employees follow all rules and regulations involving safety. Employers can ensure worker compliance with safe work practices through programs of training, supervision, safe work recognition, and progressive disciplinary measures.

Recommendation #2: Consider changing the basket button to a switch that only allows the drum to inch forward with every depression.

Discussion: When the basket button is depressed and released, the washing machine drum rotates approximately three revolutions. Holding the switch in will allow the drum to continue to rotate until released. Changing the switch to a mechanism that would only allow the drum to inch forward with every depression would remove any potential hazard created with a rotating drum when the drum door is opened. 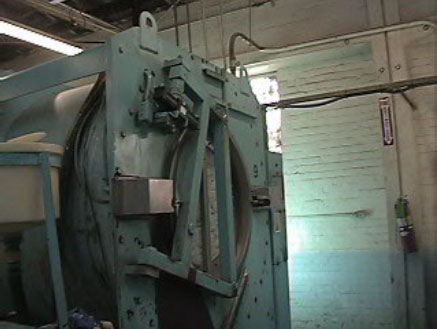 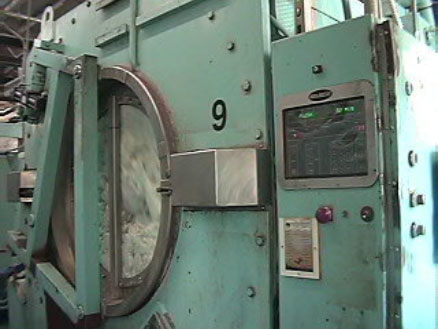 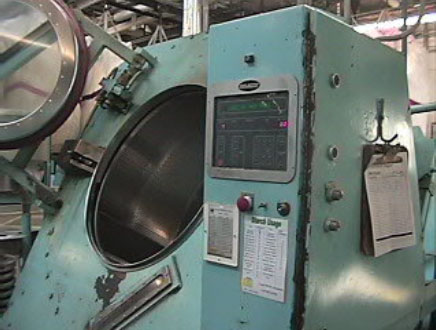 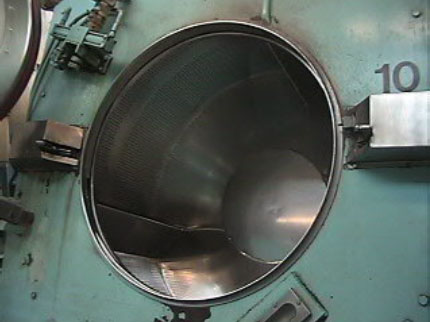 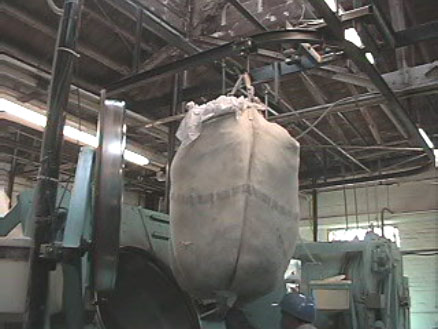 Exhibit #5. View of the laundry sling used to deliver laundry to the machine. 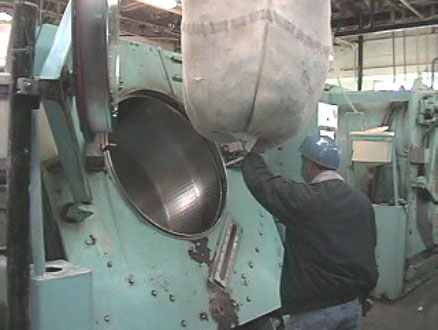 Exhibit #6. View of the laundry sling in front of the industrial washing machine. 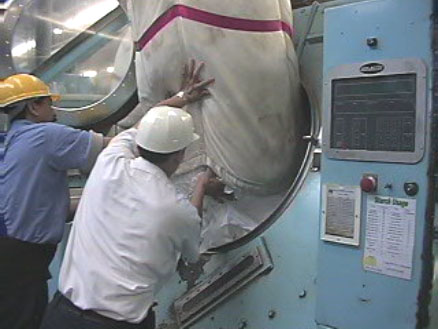 Exhibit #7. View of the laundry sling being unloaded into the industrial washing machine. 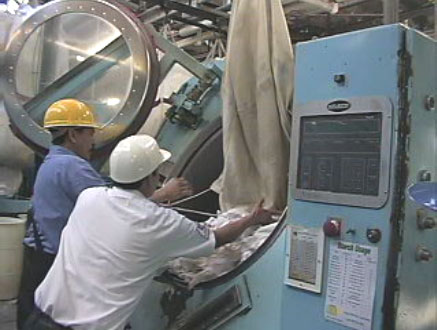