At approximately 4:50 PM, on July 17, 2001, a 23-year-old male construction laborer/ equipment operator (the victim) was crushed when a skid-steer loader tipped forward and pinned him against a building. On July 18, 2001, the Alaska Department of Labor and Workforce Development (AKDOLWD) notified the Alaska Division of Public Health, Section of Epidemiology. An investigation involving an Injury Prevention Specialist for the Alaska Department of Health and Social Services, Section of Epidemiology ensued on July 18, 2001. The incident was reviewed with company safety and supervisory representatives, AKDOLWD officials, Alaska State Troopers, and Alaska Medical Examiner, and an on-site investigation was completed.

The company in this incident was an investment corporation with diversified interests and projects throughout the state. The company had been in business for 20 years and had 117 employees at multiple sites. In this incident, the company was acting as general contractor for a residential construction project for the relocation and renovation of multi-family homes (duplex, triplex, etc.) The project began in the summer of 2000 with seven residential construction sites at three locations. The project was seasonal, currently with 14 workers; seven employees were at the incident site. The victim was a certified equipment operator and had been employed by the company for 30 days as a seasonal laborer/equipment operator. He had been working at the incident site for 6 days. The co-worker had limited experience operating a skid-steer loader. As part of his initial hire orientation, his operating skills were assessed by the site supervisor and noted as having proficient skills for that type of equipment. He had been operating the skid-steer loader for approximately 4 weeks at the incident site.

The company had a written safety and health plan that summarized the supervisors’ responsibilities, general safety rules, handling materials and tools, heavy equipment and vehicle safety, chemicals, and company policy on safety. All new employees attended an orientation to the company’s safety program upon initial hire and were given a packet containing copies of the aforementioned materials. Machine operators were observed for proficiency on site by their supervisor, however no training records were kept. The company held monthly safety meetings; additional safety meetings were held as needed. This was the third fatal injury for the company–the first construction-related fatality.

The incident site was a residential construction area consisting of several relocated and partially constructed and renovated duplexes. The site had been excavated and graded; it appeared relatively level, except for a slight grade for drainage away from the structures. The front entrances of the duplex had a small, attached wooden porch. A depression was observed in front of each porch, which were excavated as sidewalk forms (to be poured on a later date.) The excavated forms averaged 8 inches in depth and measured 45 inches wide and 72 inches long. In front of the structure where this incident occurred, the excavated form sloped back toward the building. The depth at the front of the excavated form was approximately 6 inches and increased to approximately 12 inches. The front edge appeared to have sloughed into the form. Weather at the time of the incident was reported as sunny and dry and was not considered a factor. Natural light conditions were good and were also not considered a factor n this incident.

The machinery in this incident was a skid-steer loader (Figure 1). The four-wheeled unit weighs approximately 4700 pounds and has an operating capacity of 1300 pounds. It is equipped with hydraulic foot pedal-actuated lift and tilt cylinders for the bucket. Pushing forward on the lever handles to go forward or pulling back on the handles to reverse direction accomplishes movement. The unit is in a hydrostatic braking position when the handles are in neutral. It has one manual locking brake. The manufacturer published an operator’s manual for this specific model of skid-steer loader, however the manual was not present in the unit nor at the site at the time of the incident.

On the day of the incident, the victim and his co-worker had filled, leveled, and compacted gravel and sand base material in several of the excavated forms in preparation for pouring concrete. They were moving the gravel and sand with a skid-steer loader. The co-worker was operating the loader. The victim was directing him where and when to dump the load.

The victim was standing on the ground, approximately 8 feet in front of the loader; his back was to the wall of the structure. To his right was a porch that was attached to the structure. The bucket was filed with gravel and sand from a pile 15-20 feet from the excavated form. The bucket was raised approximately 6 feet above ground. This allowed the co-worker an unobstructed view of the victim. The loader was maneuvered into position at the edge of the excavated form, and was in a hydrostatic braking position (motion neutral); the manual brake was not engaged. The victim signaled to dump the load. As the bucket was rotated downward to dump the load, the rear of the loader lifted and rolled forward on its front tires into the excavate form. Possibly the load shifted, the edge of the excavated form sloughed, or a combination thereof caused the loader to roll forward into the excavated form. The loader became unstable and tipped forward onto the front wheels. The right front edge of the bucket struck and pinned the victim against the wall. The co-worker immediately pulled the handles to move the loader back from the wall and lowered the bucket.

The victim took a few steps before he collapsed to the ground. The co-worker exited the loader to check the victim’s condition. He called to two other workers at the site to call for help. One worker used her cell phone to call 911. The victim was unresponsive. CPR was started; rescue breathing was continued after a pulse was detected. Emergency medical service personnel arrived approximately 5 minutes after the initial call. The victim was transported to a nearby hospital where he was pronounced died from his injuries.

The Medical Examiner’s report listed the cause of death as multiple blunt force and crush injuries.

Recommendation #1: Employers should ensure that workers are knowledgeable of manufacturer recommended operating procedures and safety practices for equipment that they are assigned to operate.

Discussion: While containing a load, the bucket of the skid-steer loader was raised to approximately 6 feet above ground. With no load, the majority of the weight of the loader is on the rear axles. Weight shifts to the front axle when the bucket is loaded. Balance is the key to stability. With a loaded bucket elevated to allow an operator to see under the bucket, the center of gravity is shifted forward and stability is significantly jeopardized. Operators should be aware of load limits and check the load capacity rating for the loader. In addition, operators should always keep the loader’s bucket as low as possible when traveling and turning and should lift the bucket only as high as necessary to dump a load.

Recommendation #2: Employers should ensure that only trained workers operate construction equipment and that training, supervisor observation, and experience are documented in the personnel record.

As part of the training, workers should be thoroughly acquainted with the equipment, the operator’s handbook, the operations and maintenance manual, and the manufacturer safety training manual and should be able to demonstrate their knowledge to their supervisor. Skills assessment should include but not limited to:

In addition, training should be documented in the employee record and include training dates, content/topic, follow-up observation dates, and authorized trainer. Random observations are helpful to ensure continued use of safe practices.

Recommendation #3: Employers should ensure all workers are able to recognize and avoid hazardous situations.

Discussion: In this incident, the victim placed himself in front of the skid-steer loader in an area that restricting his retreat. Workers should always avoid any place where a body part can be caught or struck by machinery. The National Safety Council has noted that accidents caused by unsafe practices outnumber accidents from unsafe condition of equipment. The victim failed to recognize the hazard while he stood in front of the loader. Training in hazard recognition, control, and avoidance could have helped the workers recognize the hazard before they began work. They could have established a safe distance and position for the signal person from the loader. 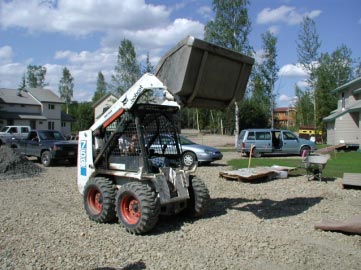 The Alaska Division of Public Health, Section of Epidemiology performs Fatality Assessment and Control Evaluation (FACE) investigations through a cooperative agreement with the National Institute for Occupational Safety and Health (NIOSH), Division of Safety Research (DSR). The goal of these evaluations is to prevent fatal work injuries in the future by studying the working environment, the worker, the task the worker was performing, the tools the worker was using, the energy exchange resulting in fatal injury, and the role of management in controlling how these factors interact.