On August 29, 1995, a 22-year-old male machine operator (the victim) died from injuries he received after being struck by the elevator of a concrete block cuber machine. The cuber machine was part of the plant’s concrete block manufacturing equipment. The machine was connected to a conveyor belt system that directed concrete blocks onto the cuber’s elevator which then raised and arranged the blocks into cubes of 90 blocks each. The cubes were transferred via conveyor belt to the strapping area. The event was unwitnessed; however, it is assumed that a cube of concrete blocks became lodged on the conveyor belt near the cuber’s elevator. The victim, without first shutting off and locking/tagging out the machine, opened a manually operated access gate into the machine’s operating area. The victim positioned himself partially under the raised elevator and used a piece of wood to try to dislodge the cube of blocks. At that time, the cuber machine cycled and its elevator dropped, striking the victim on the lower spine. About 1 minute later the president of the company was walking by the area and noticed the victim trapped beneath the elevator. The president shut off the machine and had another worker call the emergency medical service (EMS). The EMS arrived at the site in 6 minutes. EMS personnel performed defibrillation and cardiopulmonary resuscitation, and transported the victim to a local hospital where he was pronounced dead on arrival. NIOSH investigators concluded that, in order to prevent similar incidents, employers should:

On August 29, 1995, a 22-year-old male machine operator (the victim) died as a result of injuries he received while attempting to clear a jammed conveyor belt. On August 30, 1995, officials of the Occupational Safety and Health Administration of the State of Tennessee (TOSHA) notified the Division of Safety Research (DSR) of this fatality, and requested technical assistance. On September 7, 1995, a DSR safety and occupational health specialist conducted an on-site investigation of the incident. The incident was reviewed with the TOSHA investigator, two employer representatives, and the police detective assigned to the case. Photographs were taken of the incident site and pertinent reports were obtained during the investigation.

The employer was a concrete block manufacturing plant that produced concrete block of various sizes and had been in production since March 1995. The plant operated on one 10-hour production shift (7 a.m to 5:30 p.m.) five days a week, and employed 9 workers performing various tasks in the production of concrete block. The company had two additional operating plants throughout the state, but neither plant produced concrete blocks. The plant had no safety manager, safety policy, or written safety procedures. The employer stated that he verbally communicated safety procedures that included lockout/tagout procedures; however, the employer did not provide any formal task training for employees. Employees received on-the-job orientation training. During the 10 months the victim had worked for the employer, he had helped construct the building and had subsequently worked to produce block.

On the day of the incident, workers at the plant were manufacturing concrete block 8 inches wide by 8 inches thick by 16 inches long. The workers had arrived at the plant about 6:30 a.m. and began the work shift at 7 a.m. The process for manufacturing the concrete blocks began with pre-measured/weighed cement, sand, and gravel which was moved by conveyor into a cylindrical mixer; after the components were thoroughly mixed they traveled by conveyor to the block-making machine. At this point, green (non-cured) blocks were produced and then moved by the conveyor to a stacker/destacker unit where blocks were stacked on racks and moved into a steam kiln for curing. After the blocks were cured, they were moved back to the stacker/ destacker by conveyor, which unstacked the concrete blocks and moved them to the cuber machine. The cuber machine arranged the blocks in a cube consisting of six levels with 15 block per level for a total of 90 blocks per cube. The blocks were then strapped with metal bands and moved to the holding yard for shipping (Figure 1).

The victim was responsible for operating the metal strapping machine, located next to the cuber machine, and other duties as assigned. On the day of the incident, due to a machine breakdown, the victim had been performing duties such as housekeeping and stacking blocks by hand until about 10:40 a.m. At 10:49 a.m. concrete block production had been in progress for about 9 minutes when the victim apparently noticed a cube of blocks lodged on the conveyor belt near the cuber machine. The employer reported that standard procedure was to shut down the cuber machine at the control panel and lock out the controller before accessing the machine’s working area. Although the event was unwitnessed, evidence at the scene indicates the victim, without first shutting off and locking/tagging out the machine, opened a manually operated steel access gate into the machine’s operating area. The victim entered the area and positioned himself partially under the raised elevator (the elevator raises 6 times at intervals of 15 seconds [one cycle] to cube the blocks, after which one cycle is completed and the elevator drops), and used a piece of wood (2″ thick by 4″ wide by 3′ long) to try to dislodge the jammed conveyor belt. At that time, the cuber machine (Figure 2), cycled and its elevator dropped, striking the victim on the lower spine. About 1 minute later the president of the company was walking by the area and noticed the victim trapped beneath the elevator. The president shut off the machine and had another worker call the emergency medical service (EMS). The EMS arrived at the site in 6 minutes. EMS personnel performed defibrillation and cardiopulmonary resuscitation, and transported the victim to a local hospital where he was pronounced dead on arrival.

The medical examiner listed the cause of death as crushing lower trunk injuries.

Discussion: The employer does not have a written safety program, but does claim to have verbally communicated lockout procedures for hazardous energy release. Company-wide formal written safety programs should be developed that describe safe work procedures for all tasks to be conducted, and include discussions of appropriate tools (e.g., safety lockout/tagout of equipment) and protective equipment required. Additionally, training should be provided to all workers to ensure they are aware of the safe work procedures, and the safety hazards involved with each task. Currently, OSHA standard 29 CFR 1910.147 requires the control of hazardous energy through the use of lockout/tagout. If workers are exposed to the release of hazardous energy, then the energy should be locked out to prevent inadvertent activation of the equipment. A comprehensive lockout/tagout program should include procedures for (1) de-energization of potentially hazardous energy (electrical, chemical, mechanical, etc.); (2) locking and tagging of the energy control source; (3) dissipating or blocking of any stored energy, e.g., energy stored in fly wheels, springs, etc.; and (4)verification that the hazardous energy has been controlled. The program should also include procedures for the safe re-energization of equipment once maintenance or cleaning has been completed.

Recommendation #2: Employers should consider the development and installation of interlocking gates which protect workers from hazardous areas.

Discussion: Because of the ever-present danger of being struck by or entangled in machinery when working near moving machinery components, employers/machine manufacturers should consider installing interlocking gates designed to deactivate the machine when the gate is opened. In this incident, a steel access gate protected workers from the machine’s working area, but the gate could be opened and access gained without stopping the machine. A gate with an opening mechanism controlled by an electrical switch wired to the emergency stop switch could stop the machine’s movements instantly when the gate is opened.

Recommendation #3: Employers should conduct a safety hazard analysis of all work locations in all plants, and implement corrective action where necessary.

Discussion: Many work locations present safety hazards that could cause injury to the worker. Each work location in each plant should be evaluated for the possibility of electrical hazards, chemical hazards, release of hazardous energy (e.g., moving parts of machinery), fire or explosion hazards, moving equipment (e.g., forklifts, manlifts, etc.), excessive noise, heat stress, ergonomic problems (e.g., comfort of workers operating machines requiring a repeated task), falls from elevations or falls over equipment or objects on the floor, flying objects (e.g., eyes not being protected), or a combination of hazards. Once potential hazards are identified, corrective action should be implemented as necessary to reduce the risk of injury. Note: A similar incident occurred at the plant on July 27, 1995, when another machine operator received two broken bones in his right hip as a result of being struck by a concrete block making machine. 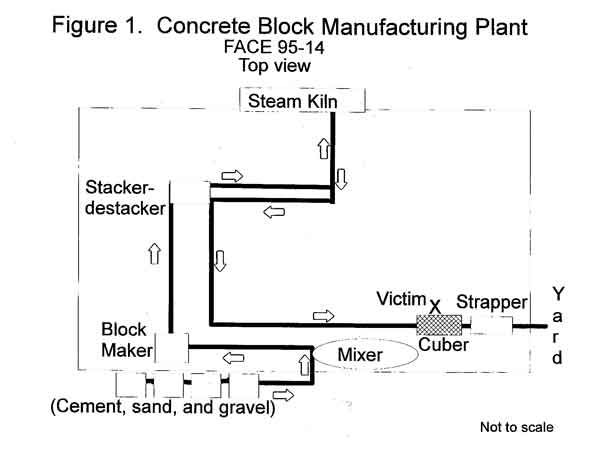 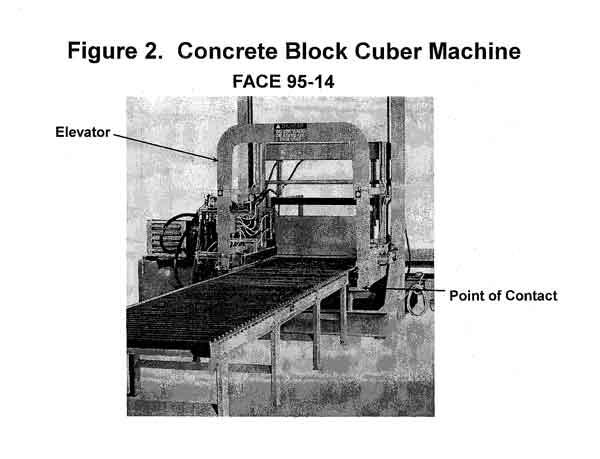