On February 1, 1992, a 49-year-old male heavy equipment operator (the victim) was fatally crushed by the bulldozer he was operating. On February 3, 1992, officials of the U.S. Department of Labor, Occupational Safety and Health Administration (OSHA) notified the National Institute for Occupational Safety and Health (NIOSH), Division of Safety Research, Alaska Activity, of the death. On the same day, a safety specialist from the Alaska Activity traveled to the incident site with the OSHA compliance officer and conducted an investigation. The incident was reviewed with the OSHA compliance officer, police, and coroner, and their reports were obtained. The subcontracting company owner (the employer), the safety manager, coworkers, and representatives for the general contractor were interviewed. Photographs and diagrams of the incident site were also obtained during the on-site investigation.

The employer in this incident was a construction company that had been in business for 4 years. The company had 60 employees, including 26 heavy equipment operators. Most of the company’s construction projects involved constructing access roads and islands for companies engaged in oil exploration. To complete a single island project, heavy equipment was operated continuously with two operators working alternate shifts on each piece of equipment. Operators typically worked 10 to 12 hours a day, 7 days a week, for periods ranging between 2 to 4 months. The company had a safety policy, a safety program, and written basic safe work procedures at the time of the incident. The company employed a full-time safety manager, and safety meetings were conducted weekly to discuss various safety issues pertaining to the current construction project. A safety planning meeting was normally conducted prior to the start of each construction project.

The company had been subcontracted by an oil company to construct an oil exploration island in the Beaufort Sea, 2/3 miles from shore. Several types of heavy equipment were used during the construction project. After constructing a road of ice to the designated location of the island, an ice-cutting ditcher was used to cut 5-cubic-foot blocks of ice. A track-type backhoe removed the ice blocks and a front-end loader carried them from the construction site. Haulage trucks then dumped gravel fill near this area and a bulldozer pushed the fill into the sea water void (a total depth of about 8 feet) created where the ice blocks had been removed. The company had previously built 11 islands of this type using this same construction technique. All of the islands had a finished surface, 8 feet above sea level, with approximate dimensions of 325 feet by 300 feet.

On the first day of constructing this island (the day of the incident), the victim and the other heavy equipment operators for the second shift arrived at the construction site, and began working at 7:00 p.m. The temperature was between -41 and -50 degrees Fahrenheit. The site was illuminated by three light banks approximately 200 to 250 feet from the heavy equipment. Each bank contained four 1500-watt bulbs positioned 16 feet above the ground, and each piece of heavy equipment was equipped with front headlamps. After each load of gravel fill was dumped, the victim pushed and compacted the fill, operating the bulldozer alternately in the first gears of forward and reverse at half throttle [an approximate speed of 1 mile per hour (mph)].

Investigative information (interviews with eyewitnesses, coworkers, close examination of the bulldozer involved in this incident and other similar types, and information provided by bulldozer operator and mechanic instructors familiar with this type of bulldozer) suggests the following scenario (Figures 1-4):

With the blade completely down in the “float position,” the throttle at half, and the bulldozer on level ground, the victim attempted to shift the transmission control lever out of the first reverse gear into neutral. However, in doing so, he may have moved the lever to an unstable neutral position (at a point between the first reverse gear and the neutral position) where it remained only temporarily. Assuming that the bulldozer transmission was in a stable neutral position (and without pushing the transmission control safety lever down to the vertical, neutral lock position), the victim exited the cab on the right side, and stepped down onto the track of the bulldozer. He then waved both hands above his head, presumably to attract a truck driver’s attention in order to give him directions on where to dump his next load of fill. (According to coworkers, this had been a regular practice of the victim, and he had been cautioned to stop this practice during a safety meeting several months before the incident.) At this moment the transmission may have slipped back into the first gear of reverse (since the transmission control safety lever was not engaged in the neutral lock position), causing the track on which the victim was standing to move suddenly backwards. Presumably, as a result, the victim’s feet were caught between the underside of the fender and the top of the track cleats, causing him to fall onto the track. As the bulldozer continued in reverse at approximately 1 mph, the victim was pulled between the underside of the fender and the top of the track cleats, then beneath the track itself, where he was fatally crushed.

The backhoe operator was able to stop the bulldozer (after it had traveled approximately 40 feet) by moving the backhoe into its path. The backhoe operator then ran to the bulldozer, climbed up into the cab, shifted the transmission control lever out of reverse and into neutral, and put the transmission control safety lever into neutral lock. Company officials notified state and local police of the incident, and a state trooper who arrived several hours later, pronounced the victim dead at the scene.

The medical examiner listed the cause of death as massive crushing and severing trauma to the head and body.

Recommendation #1: Employers should ensure that mobile equipment is not left unattended unless all precautions necessary to prevent motion have been taken.

Discussion: The bulldozer involved in this incident, and other models, are equipped with a “transmission control safety lever” designed to lock the transmission into neutral, thereby guarding against unexpected and sudden motion, and ensuring that the transmission will stay in neutral. However, the victim did not engage this device before exiting the cab. The manufacturer’s Operator’s Guide recommends the following procedures prior to the operator dismounting the machine:

If these procedures had been followed, the fatal injury probably would have been prevented.

Recommendation #2: Employers should ensure that compliance with safe work procedures are enforced through frequent inspections and observation of employee work habits.

Discussion: According to statements by coworkers, the victim had been observed on several occasions dismounting from the bulldozer cab with the engine running, and without engaging the transmission control safety lock. (The position of the red transmission control safety lever is visible from outside the cab when either door is open.) This practice was a violation of written company safety procedures for operation of this type of equipment, and the victim had been cautioned about it during a safety meeting several months before the incident. Frequent inspections, both scheduled and unscheduled, coupled with observation of work habits by qualified management officials would help ensure that company safety procedures are being followed. Inspections also clearly demonstrate that the employer is committed to preventing occupational injury. Strong disciplinary action should be considered for employees who knowingly and habitually disregard written company safety policies.

Recommendation #4: Employers should consider installing two-way radios inside the cabs of trucks and heavy equipment so that operators can communicate without leaving their cabs.

Discussion: In this incident none of the trucks or heavy equipment were equipped with two-way radios. Because it was necessary for operators to communicate on this job, the victim exited the bulldozer cab, apparently to tell a truck driver where to dump his next load of fill. Doing so proved fatal. If the victim had been able to communicate with the truck driver by two-way radio, this fatality might have been prevented.

Discussion: In this incident, the victim stepped out of the bulldozer cab onto the track without shifting the transmission control safety lever into the neutral lock position. This resulted in fatal injuries. Consideration should therefore be given to engineering design changes and/or modifications that will reduce the risk of operator injuries. These changes could be incorporated in the design and manufacture of new heavy equipment, and in the retrofitting of existing heavy equipment. The following are examples of passive engineering controls which might have prevented the incident, and should therefore receive careful consideration:

Recommendation #6: Equipment manufacturers should develop and affix appropriate safety signs inside the cabs of bulldozers and other heavy equipment, listing necessary precautions.

Discussion: Safety signs should stress safe work practices such as shifting the transmission control safety lever into the neutral lock position before exiting the cab. This sign should be placed in a conspicuous location inside the bulldozer cab. 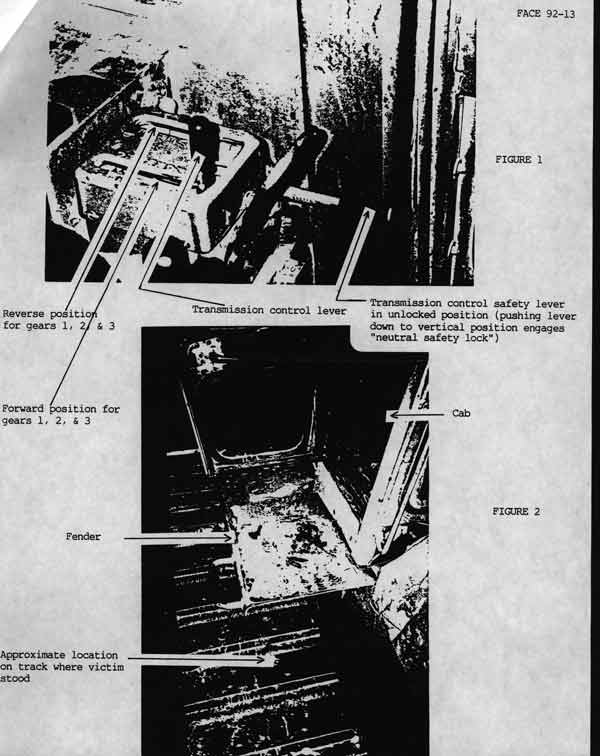 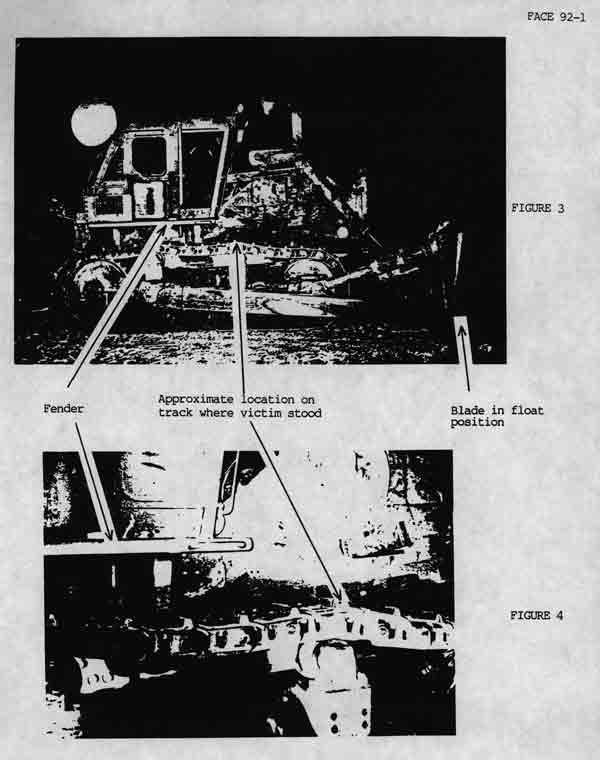